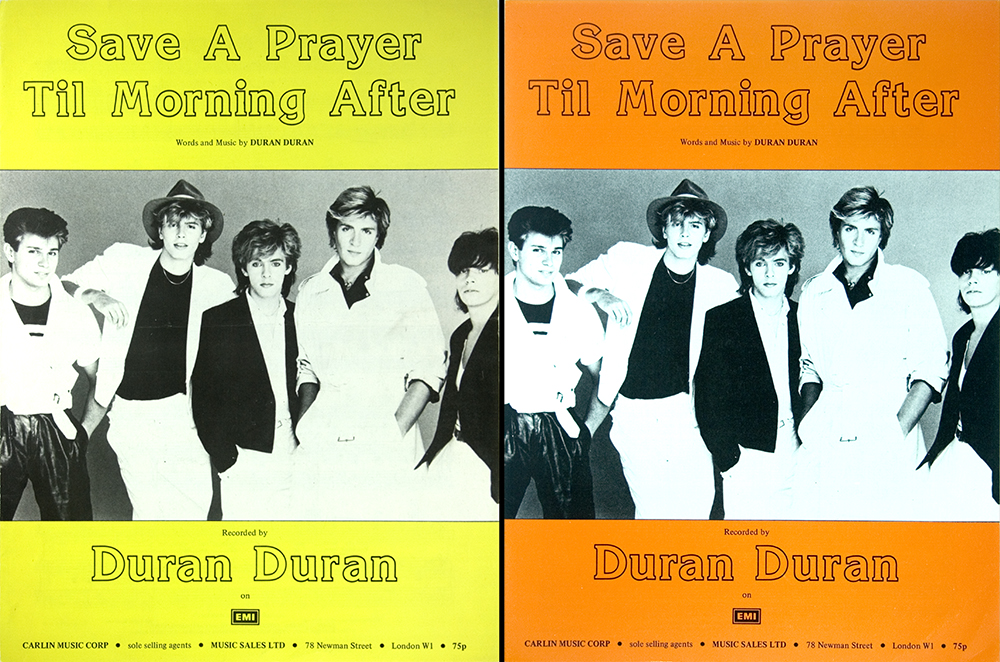 In December 2018, we looked at tour programmes. Today we’re revisiting something from that column to launch us into this month’s topic - - the tiny details that differentiate editions of the same item. To wit: these two variants of the WEDDING ALBUM tour book look the same on the outside, but the first inside page has at least two differences, one pretty obvious and the other a little more subtle.

You could confuse these two seven inch singles of GIRLS ON FILM if you didn’t read the fine print, telling us which one was manufactured in the United States and which is from Canada (though you may need your magnifying glass to make out the tiny green print at the edge of the labels).

Another item that we touched upon in a past column - Duran Duran's The BOOK OF WORDS. The book was reprinted and later editions were updated. The first edition refers to the as yet unreleased ARENA album as BURNING BRIGHT, a reference to William Blake’s poem THE TYGER:

"Tyger Tyger, burning bright, In the forests of the night;"

The same poem also inspired the title of the instrumental TIGER TIGER from SEVEN & THE RAGGED TIGER.

These adverts for "New Moon on Monday" are all from different publications, and are at the same time both subtly and radically different, though for a straightforward reason; Back when magazine design and layout was done by hand, publications received a set of printed assets, including logos, band photos, and other core elements from which the magazines would lay out the ads to fit their available space. This was often based on a sketch, or proof, provided by the record company.

This difference is pretty un-subtle! The UK sheet music for SAVE A PRAYER comes in two versions, orange and yellow, for no reason other than the publisher used a different colour paper for the second printing!

Finally, we’ll look at two POP TRASH programmes, the pink and silver edition from the first leg of the tour, and the purple and gold from the later leg. The design emulates a magazine, with a table of contents on the first page, though looking closely, we see the credits are substantially different. And that’s only the start! While many pages are the same in both versions, others differ widely, with the pages appearing in a totally different order. If you are lucky enough to have both copies, why not flip through them and compare for yourself! Fortunately, both versions feature our very own ASK KATY, whose contribution is, as always, inspirational!

If you are clever enough to spot two similar Duran items that are actually different, leave a comment for us!