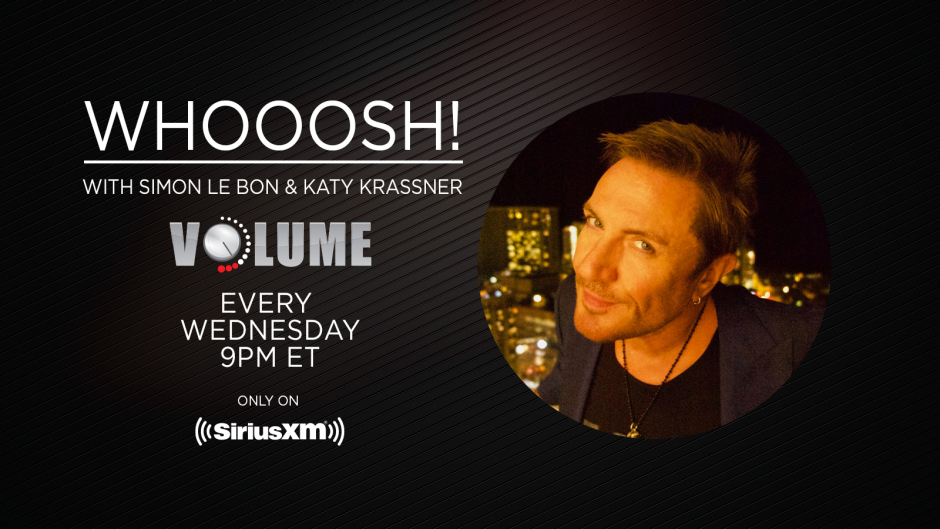 Duran Duran frontman, Simon Le Bon, has released a new podcast series called WHOOOSH!, that is now exclusively available on SiriusXM's VOLUME channel and as a playlist on Pandora. In this new series, Le Bon talks about some of his favorite records from years gone by, together with the music he has more recently discovered.

Co-hosted by long-time band associate, Katy Krassner, the series uniquely sits within Spotify’s playlists, meaning that all of the records curated and discussed by Le Bon can be played in full, allowing the listener to take the journey with them.

Each episode delves into a huge cross-section of music…some that you may expect from Duran Duran’s lead singer, such as Johnny Marr, Arcade Fire, Syd Barrett and the Sugarhill Gang, and others from more unexpected artists such as Fontaines D.C., Gerry Cinnamon, and relative underdogs such as alt-rock Australian four-piece Parsnip, and Irish noise-pop sextet Thumper. WHOOOSH! episodes are recorded weekly and are available every Friday. Episode 20 of the series will be available tomorrow. This and all other episodes can be found here.

On why he decided to take on the endeavor, Simon Le Bon said, “One morning, earlier this year, I switched over from BBC Radio 6 Music to Radio 4, and my daughter Tallulah yelled out from across the room “Call yourself a musician? You don’t even listen to music anymore!”

Le Bon continues, “Correct, I thought. After 40 years of working with Duran Duran, I only ever seemed to have time for music that I was working on or the old classics that got me into a band in the first place. And there, in the early days of lockdown, the concept for WHOOOSH! was born in my lazy-arsed imagination. Music of any genre, new and old, from anywhere on the globe. Different sounds to rub up against and to compliment each other. The only criteria being that I have to like it. WHOOOSH! – it’s the sound your mind makes when it expands to make space for a new idea.”