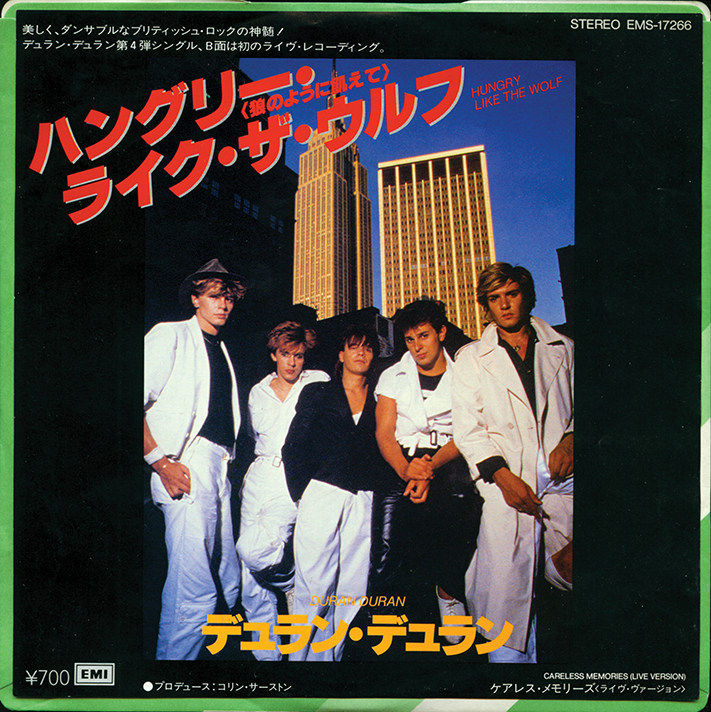 One of the major gateways into Duran Duran’s music for many fans was the song HUNGRY LIKE THE WOLF. The single has been released around the world multiple times in multiple formats, so let’s take a look at some of the most interesting (and collectible) ones!

In Japan, the 7 inch single was first released around the time of the first UK release. It has a cover that is unique to Japan, but contains the same version of the songs as the UK version.

The track wasn’t released as a commercial 12 inch single in Japan, as the format didn’t catch on in the way it did in other parts of the world; however there is a split promotional SPECIAL DJ COPY 12 inch that was sent to media and radio. Side one features the NIGHT VERSION of HUNGRY LIKE THE WOLF and side two features MACHINERY by SHEENA EASTON. These SPECIAL DJ COPY promos from Japan are always rare, as they were made in small numbers and not meant to be exported. They are doubly hard to find as they feature another artist on the b-side. In Duran Duran’s case, artists like Kraftwerk, Kajagoogoo, and Paul McCartney & Michael Jackson. Since these artists have big followings, and are popular with collectors, meaning it’s not just Duran fans who are after these rare records.

Canadian releases often just mirror the version from the United States. One great exception is this 7 inch test pressing of HUNGRY LIKE THE WOLF. As Canada’s population is around one-tenth the size of the USA’s, this Canada-only release would have been made in far fewer numbers than similar promotional items from the United States.

Here's something interesting: the single was first released in the United States and Canada in July of 1982, as B-5134 on the HARVEST label, which was a sub-label of Capitol Records. There was also a promotional 12 inch, some copies of which also contain a press release stamped with the HARVEST logo and the date of May 1982, detailing the single and what the band have been doing.

EMI was super supportive of the RIO album, and felt that Duran Duran would take off around the world. The love shown to the earlier singles by fans in distant places like Australia proved to the label that a band from the UK could use music videos to market to a place that they weren't readily available to perform live in. Capitol Records in the USA were catching on to the music video cable television station called MTV, and when that station came calling looking for content, Capitol provided HUNGRY LIKE THE WOLF.
The video helped propel the band to global success. Capitol then re-issued the single again as B-5195. In the USA, the first issue of B-5195 came in a picture sleeve that is unique to this release. It also features 2 new mixes made to appeal to the American market by David Kershenbaum. One is 5:14 and the other is 4:11 and they are billed as ‘long and short version.’

Once the band gained more support in North America, EMI looked back to Japan to continue the momentum of the band’s sold-out tour less than a year before. HUNGRY LIKE THE WOLF was issued for the second time in Japan in February of 1983, again with a custom picture sleeve unique to Japan, though the contents of the single are the same as the first issue.

And not to be left out, this seven inch single from Mexico has so much coolness going on. Not only is the cover a unique custom design, but it has the song name in spanish on the cover : HAMBRIENTO COMO EL LOBO!

re you "hungry" for more? This was the tip of the iceberg.... HUNGRY LIKE THE WOLF was released in over twenty countries and we only took a look at five. So expect a second helping at some point in the future!