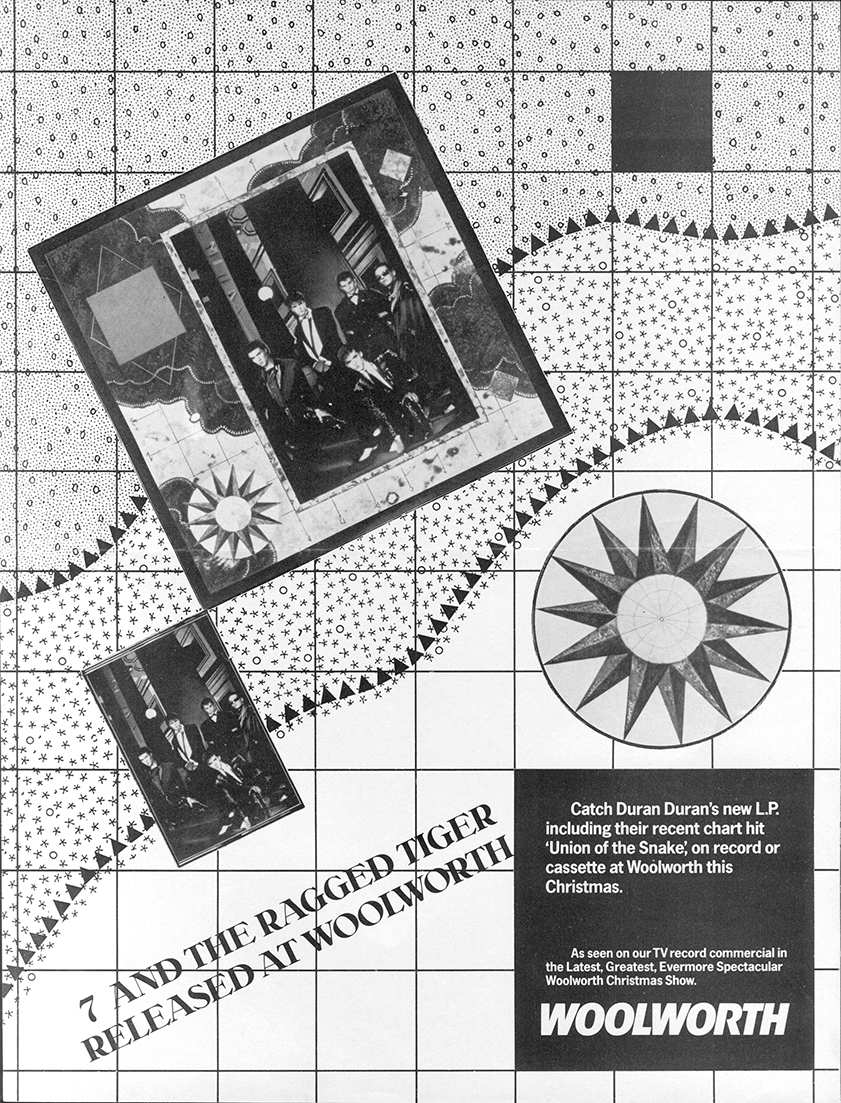 SEVEN AND THE RAGGED TIGER was released on November 21st, 1983. To commemorate 35 years of this album, let’s take a look at some of the releases centered around it, starting with this advert from Japan which announces that it is coming soon!!

This fascinating advert was produced by Woolworth’s department store in the United Kingdom. The cover art appears incomplete, with no text or double D logo. Looking closer, we see the group photo has been used twice, but the image in the lower left has a different border and its shape has been stretched, distorting the band members a tiny bit. Finally the star logo on the album cover is different from the one on the lower right, whose points don’t extend over the edge of the circle.

By now the band and label were committed to having a unified style worldwide, with identical album cover and label art in every territory. Releases differ mainly due to language, such as song name and lyric translations, or localized record company information. Most labels look like these.

As usual, when we dig deeper we can find some wonderful exceptions. Here’s a few with a more generic company format.

When collectors want to get really deep into vinyl, they often dive into Taiwan. The tiny island in East Asia had a vibrant music market in the eighties. We only have room for a tiny taste of what Taiwan has to offer, so we will surely make a return visit in the future. And no, despite the spelling errors, these weren’t bootlegs. CHADE was a well known label that put out many popular pop releases.

This sealed jigsaw puzzle from the United States was released in 1984. Finding a truly mint copy of this would be difficult today. Most copies have damaged cellophane wrap and damage to the box due to the tightness of the shrink wrapping.

A glance at ‘the Great White North,’ aka Canada gives a great example of the small differences between repressings. The original release omits song lengths, which appear on the second version. As well, version two gives Andy Hamilton credit for his sax work on TIGER TIGER. Collectors need this sort of attention to detail if they aim to build a complete collection!

This plastic disposable soft drink cup from Canada via the convenience store chain Mac’s Milk is a true collectible! It was released in 1984 and finding one in any condition is difficult as most people would have tossed the cup in the bin once the drink was finished. As well, the cheap plastic that the cups were manufactured from age badly, tending to become brittle and easily broken. So if you ever find one, ask the seller to put it in a box, then put that box in another box!!

....And here’s the limited edition poster that was included in the first pressing of 150,000 copies. This was a huge jump from RIO and DURAN DURAN, whose first editions were runs of 30,000.

This month, we stuck to the album proper and didn’t really consider the singles. Each deserves a column all to itself, so keep checking in since so far we have only covered "The Reflex" (back in May 2016).