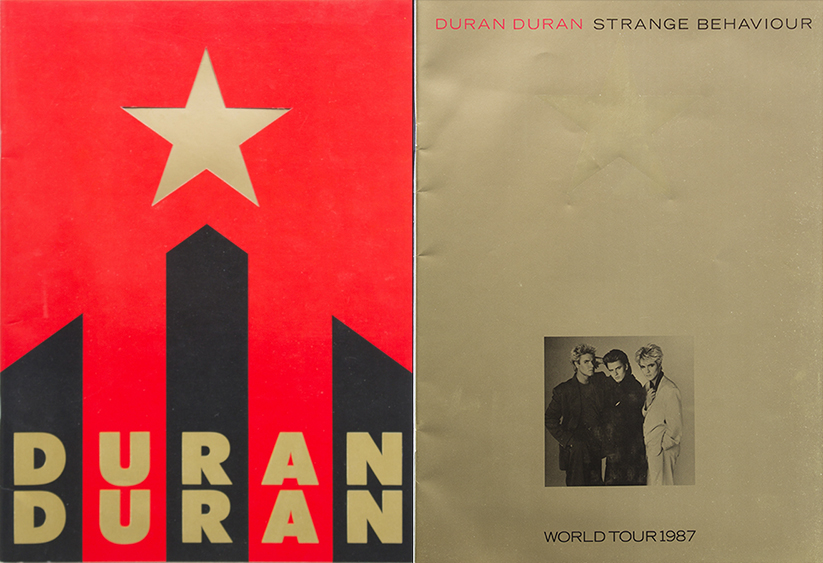 WE NOW RETURN TO OUR PREVIOUSLY SCHEDULED PROGRAMME...

Longtime fans of CC know that when topics are too large to be covered in one column we promise that more will come in a "future installment." This month is one of those future installments, where we return to tour programmes and cover some we missed in February 2015: http://duran.io/1AvXzZc

Keeping it interesting here at DDHQ, this is also a crossover. Once in a while, Ask Katy gets a question that doesn’t have a straightforward answer and requires a bit of research, such as this letter from David:

“I have one of each tour book starting with SEVEN... Of course Arcadia, Liberty and Thank You never had full blown tours. But the Tours had great names. STRANGE BEHAVIOUR, BLUE SILVER, ULTRA CHROME LATEX AND STEEL. Some tour names and eras seem a bit confusing. LET IT FLOW was more like a greatest tour but used the line from Lava Lamp. I have never heard of the Careless Memories Tour. I assumed the FASTER THAN LIGHT TOUR was the first with the book being so much like the album art. Could the CC....give the proper title to each tour? Thanks.”

On first glance, that might seem easy, but we need go no further than the tour book from SEVEN & THE RAGGED TIGER to hit the first bump in the road. Nowhere does the book refer to the tour as the “SING BLUE SILVER" tour, a name that actually comes later, in 1984, with the release of Denis O’Regan’s book and Michael Collins’ documentary of the same name. By that time, the tour was done.

So what gives?? The situation is much like the so-called WEDDING ALBUM from February, 1993. The album is actually called DURAN DURAN, a sort of reinvention and a throwback at the same time. This was of course confusing for fans, who dubbed the second release THE WEDDING ALBUM, as the cover art used photos of the band member’s parents weddings, though the first use of that name is unknown. In the case of the early tours up to the end of 1984, it is often fans, and not the band, who have given the tour its name, and the internet has made it more likely this kind of unintended ‘misinformation’ gets spread far and wide.

We know the UK tour from the winter of 1981 as the CARELESS MEMORIES tour; however, the programme has a minimum of text and it never refers to the tour by that name, calling it only UK TOUR - DECEMBER 1981.

The first Australian tour, in Spring 1982, is never given a name at all in the beautiful custom book, available only for this tour.

Just to keep things complicated, some albums have more than one tour, such as DILATE YOUR MIND, and NO ORDINARY TOUR, both in support of THE WEDDING ALBUM. Both tours spanned the globe, visiting many destinations for the first time. What separated them was the size of the production and the type of stage setup. The programme however makes no mention of either tour by name! There are two variants to this programme, one with the promoters name inside the front page, the other with the promoter’s name on the inside back. If we look closely, we can see it says DILATE YOUR MIND, which tells us one version of the book was sold on each leg.

1997 brought us the ULTRA CHROME, LATEX & STEEL TOUR, which is pretty straightforward as the name is on the cover of the tour book, which contains no dates or gig-specific info, and is done in a MEDAZZALAND ‘laughing gas at the dentist’ style. However, the ULTRA CHROME book was also sold during the December 1998 UK tour called the GREATEST & LATEST, which was promoted under that name in posters and flyers.

We’re going to end along with the century, when the band spent the first 11 months of 1999 on the LET IT FLOW TOUR, and the last month on the OVERNIGHT SENSATION TOUR, which was promoted with posters using the name, so let’s deem that legit! David wondered about LET IT FLOW, which was “more like a greatest tour but used the line from (the song) "Lava Lamp.”

While the album POP TRASH wasn’t released until June 2000, the band were already playing songs from it during the 1999 tour, on average four a night, including "Lava Lamp," a stunning version of "Secret Oktober," and a few rarely heard deep cuts like "Friends of Mine" and the perfecto mix of "Out of my Mind." A mixed bag, perhaps not a ‘greatest’ tour, but the confusing tour names sure aren’t helping!

The CC wishes you HAPPY HOLIDAYS and all the best for 2019! Here's hoping we get a new tour programme sooner rather than later!