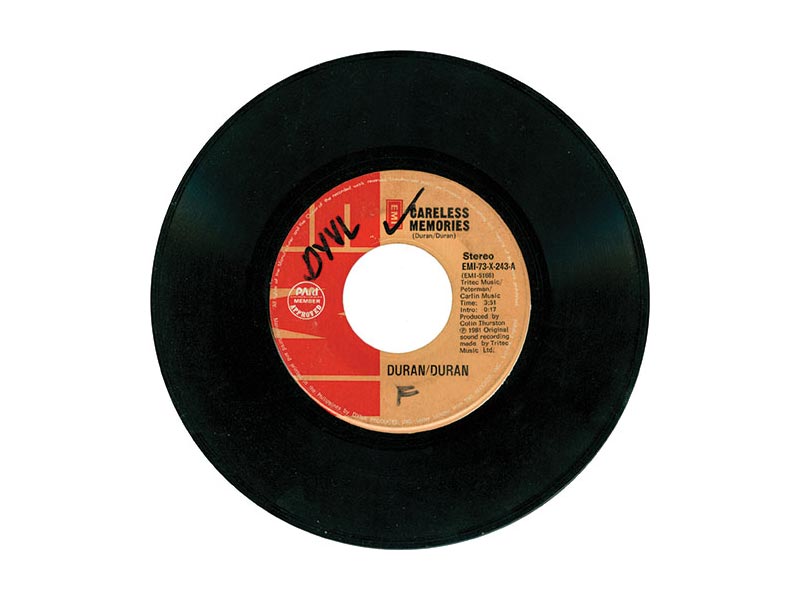 With a crashing within...

It's been a while since we looked at a single release, so let's take it all the way back to 1981 and the oft forgotten second single, CARELESS MEMORIES. It may be good to start with this ad from the UK music press, released the week before the single.

CARELESS MEMORIES was released in the UK on April 20, 1981 as a 7-inch single with KHANADA as the B-side track.

A 12- inch single was also released in the UK, with a slightly longer edit than the 7 inch, and is also the version that appears on the first album. This 12-inch features a B side: a cover of FAME from David Bowie's album YOUNG AMERICANS, a song co-written by John Lennon.

One of the most fascinating things you can find as a collector is a mis-pressed record, where either the audio or the sleeve or label art is not what it's meant to be. HQ once saw a stock CD copy of SEVEN AND THE RAGGED TIGER that played ABBEY ROAD by THE BEATLES! The type of mis-press that caught our attention here is an error on the artwork. This CM 12-inch is missing all the text. The idea that this made it past any sort of quality control is quite fantastic!

In the United States, Harvest Records released a promotional 12-inch that featured CARELESS MEMORIES on side A, and ANYONE OUT THERE and GIRLS ON FILM on side B.

Compared to many Duran singles, especially the later ones, CARELESS MEMORIES wasn't widely released worldwide. As a result, it makes this single one of the more collectible! The jewel has to be the 7-inch single from South Africa, with a completely custom cover unlike any other released worldwide.

Despite not getting a wide global release, for some reason this single was released in some pretty exotic locales, like Bolivia...

Some pretty wild choices, considering this song was NOT released as a single in the USA!

If you think the 7-inch releases are scant, let's look at the 12-inch ones. Beyond the UK stock version and the USA promo mentioned above, there is really only one rare item to find: the red labelled UK 12-inch test pressing.

Without a typical 12-inch remix, the track was excluded from release in several territories. As well, Duran Duran was still a new band, with only one single under their belt, so EMI still wasn't sure what moves to make with this track. This all makes the single sort of an oddity, one of the factors that adds to the rarity of these items.

Never fear if you aren't into collecting mega-rare vinyl, the CARELESS MEMORIES single is included in the CD singles box set, which is hard to come by, but not nearly as rare as a CM 7-inch from South Africa!