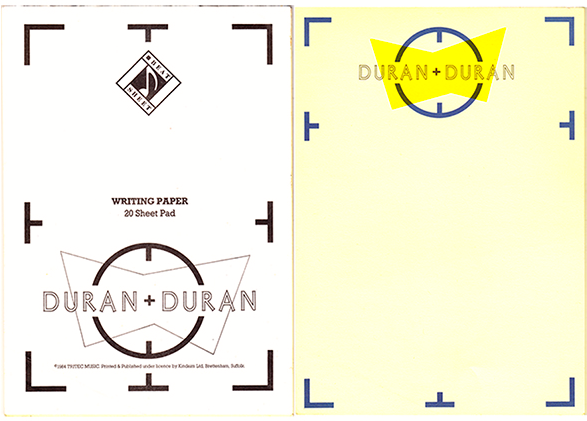 Surely some of the most fantastical collectibles to ever bear the Duran Duran mark would be the stationery and leisure supplies that came out in 1985. This month we will take a look at these gems, starting with a merchandise sheet that came in a packet from the fan club. This sheet, which was sent out in fan club packs in late 1984, was the first glance at the new line.

The stationery sets were the first items released, with the notelets and notepad offered in maize yellow, pearl grey and Wedgewood blue. Here an example of both in maize yellow. The notelets came with matching envelopes, shown to the right, which were an option when ordering the notepad.

At the time, the fan club had the lead on the best official merchandise. Packets always included a nice colour printed merchandise sheet as well as some in black & white. This colour merch sheet came in the first club pack of 1985.

This second example came in the second packet of the year and featured not only the stationery and leisure items, but a full range of merchandise including records and tapes.

One of the best items (in HQ's opinion) has to be this attache case. This was first sold via the fan club, and later sold worldwide as officially licensed merchandise, as was the rest of the line.

Not to be outdone, there was a matching backpack! All the images of the band used in this set were done by the late Francesco Scavullo, who took many iconic photos of Duran Duran in 1984.

The folio is a thick card folder with an inner elastic that could be used for "keeping loose notes, letters, photographs and cuttings etc. in perfect condition."

This vinyl shopping bag is another wonderful item.

And to complete your ensemble, the pencil & pen case.

If you're keen, you might have noticed some items that are listed on the merch sheets without a picture. And if you're super keen, you may notice one item mentioned in the merch sheet that isn’t even in this column! (We told you this stuff was rare!) Do you have any of the items that aren't featured? Or do you have a story about owning these items? If so, we want to hear about it on our socials!