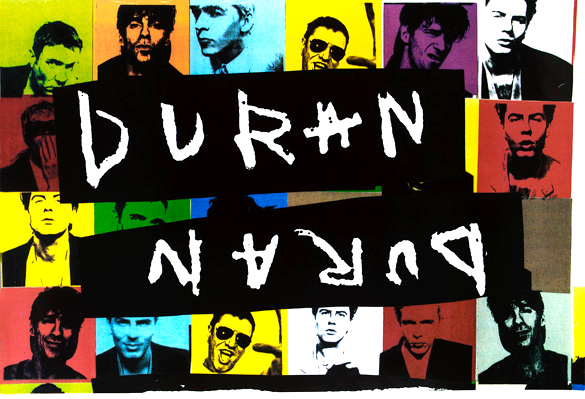 February 11th, 2018 marks the Silver Anniversary of THE WEDDING ALBUM. The album was officially titled DURAN DURAN, but fans began using the name THE WEDDING ALBUM to distinguish it from the band's self-titled 1981 debut. The project has a wonderful history, so let's start with a bang, going all the way back to June 1991 with this memo from Capitol Records outlining the band's next project.

The next collectible to come along was a 1992 promotional cassette from Capitol in the USA that features versions of most of the songs from TWA.

Here's one of several promotional photos that Capitol used as part of the press kit sent to radio and print journalists. Often times these kits would be customized, depending on who it was being sent to. Some recipients might get just the band bio and one photo. Others might get copies of press cuttings, multiple photos, or other items depending on how important they were in the industry.

Postcards were a popular promo at the time, and Capitol had at least 2 versions to help promote TWA. The first was sent out when the record was still brand new, and the other when the tour was already underway. Ephemera like these are always hard to find, as many recipients would have pinned it up for a couple of weeks until a new one came to take its place.

TWA's massive singles ORDINARY WORLD and COME UNDONE both had many releases around the globe, and are each worthy of their own column. But since this section is about collectibles, there are other tracks worth taking a look at.NONE OF THE ABOVE was released in Japan as a 3-inch CD single and in the United States as a promotional CD single, both in incredibly small numbers, and are now quite scarce.

DDROWNING MAN was released as a 12 inch in the United States on Capitol Records, and was the A-side of a 7 inch juke box promo single with TOO MUCH INFORMATION as the b-side. Several remixes of the track were produced and appear on other releases around the world.

Another US-only 12-inch was the very limited blue vinyl issue of TOO MUCH INFORMATION. It features four remixes of TMI, which ended up becoming a minor radio hit in America. This page from the American music industry trade magazine HITS shows radio requests, airplay and sales.

The DILATE YOUR MIND tour lasted well over a year, beginning with a series of stripped down acoustic shows in February 1993. At some point the band did one of their most unique promos, which led to two of the rarest items from the entire TWA cycle: an actual wedding in New York City, for which these Duran Duran wedding favours were produced. A member of DDHQ was actually at the wedding; the band did not perform but did stand as witnesses for the bride & groom who entered for the chance to be married with Duran Duran at their side in a contest run by Capitol Records and Z100 Radio.

By the time of this show at Desert Sky Pavilion on August 13th, 1993, the tour became a full production. This call sheet would be placed around the backstage area of the venue to keep crew on schedule. The pass would be used by local and temporary crew.

During the tour, Simon's endured some unfortunate issues with his voice, and some gigs were postponed or cancelled. This handbill and ticket from Hamilton, On, Canada is for a gig on October 23, 1993 that unfortunately was never rescheduled.

This wonderful poster from Japan commemorates the first two dates of the tour in Japan, at the Yoyogi Olympic Arena in Tokyo on December 15th and 16th, 1993. It was the first time the band had returned to Japan since 1989.

Capitol Records was riding high on the success of TWA, so they were happy to send out this Christmas greeting to music industry people in December 1993.

Our final item for this month is a real gem! The Columbia House record and tape club was ubiquitous for music fans in North America in the 80s and 90s. Each month the club would send members a catalog that would let them choose from new releases and classics alike. This issue features Duran Duran on the cover, as well as an article inside the magazine.

The wonderful thing about THE WEDDING ALBUM is that it produced so many terrific collectibles, we will have material for many future columns!