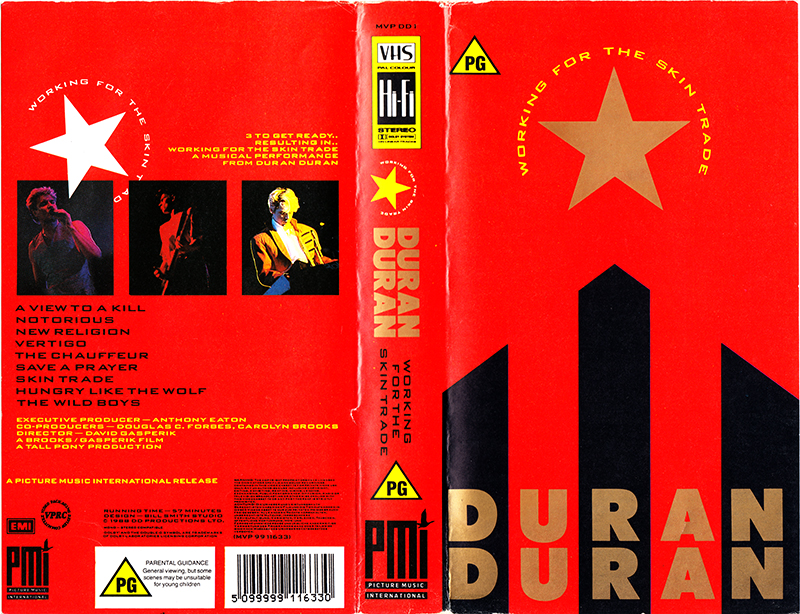 WORKING FOR THE SKIN TRADE // THREE TO GET READY

In an earlier Collector's Corner, we touched on the 1988 concert video WORKING FOR THE SKIN TRADE, which was released by EMI-PMI. There's more to this concert vid than meets the eye, so this month let's dig deeper.

WORKING FOR THE SKIN TRADE was first released on VHS and Beta in the UK and the Netherlands in June 1988 on the Picture Music International label. The 60 minute long live concert film showcases the Strange Behavior tour in support of the album NOTORIOUS.

Japan had a VHS release as well as a laser-disc. As with many laser-discs from Japan, WORKING FOR THE SKIN TRADE is very rare and still fetches a good price considering laser-disc players fell from vogue a long time ago! The best copies have an intact OBI strip and insert sheet.

WORKING FOR THE SKIN TRADE was re-released on the NOTORIOUS CD+DVD box set in 2010 as it was never released in North America in the 80s.

Many people may not be aware that there is a companion piece to WORKING FOR THE SKIN TRADE. While preparing for filming a live show in colour, director David Gasperik and producer Carolyn Brooks worked on a behind the scenes documentary filmed completely in black-and white which the band called THREE TO GET READY. The film covers rehearsals, auditions for the Strange Behaviour tour musicians, press interviews and much more. Shown at film festivals in 1987, it was released on VHS in a 29 minute form, and a less well known 75 minute version via AURORA ENTERTAINMENT in the USA.

In a real challenge for collectors, the box art for the two versions of THREE TO GET READY are identical! The only way to tell them apart is to look at the VHS cassette, and check for a silver LIMITED EDITION sticker.

If you have never seen these films before, start with THREE TO GET READY, as the end of the full 75 minute version leads straight into the opening of WORKING FOR THE SKIN TRADE, only now in glorious colour!

Finally, a word of caution...If you plan on watching any used VHS tapes, remember that there are different video formats from region to region, making the tapes unplayable in the incorrect machine. NTSC is used in the Americas, Japan, Korea and a few other countries. PAL (and to a lesser extent SECAM) are used primarily in Europe, the Middle East and Africa. If you’re unsure, ask the internet!