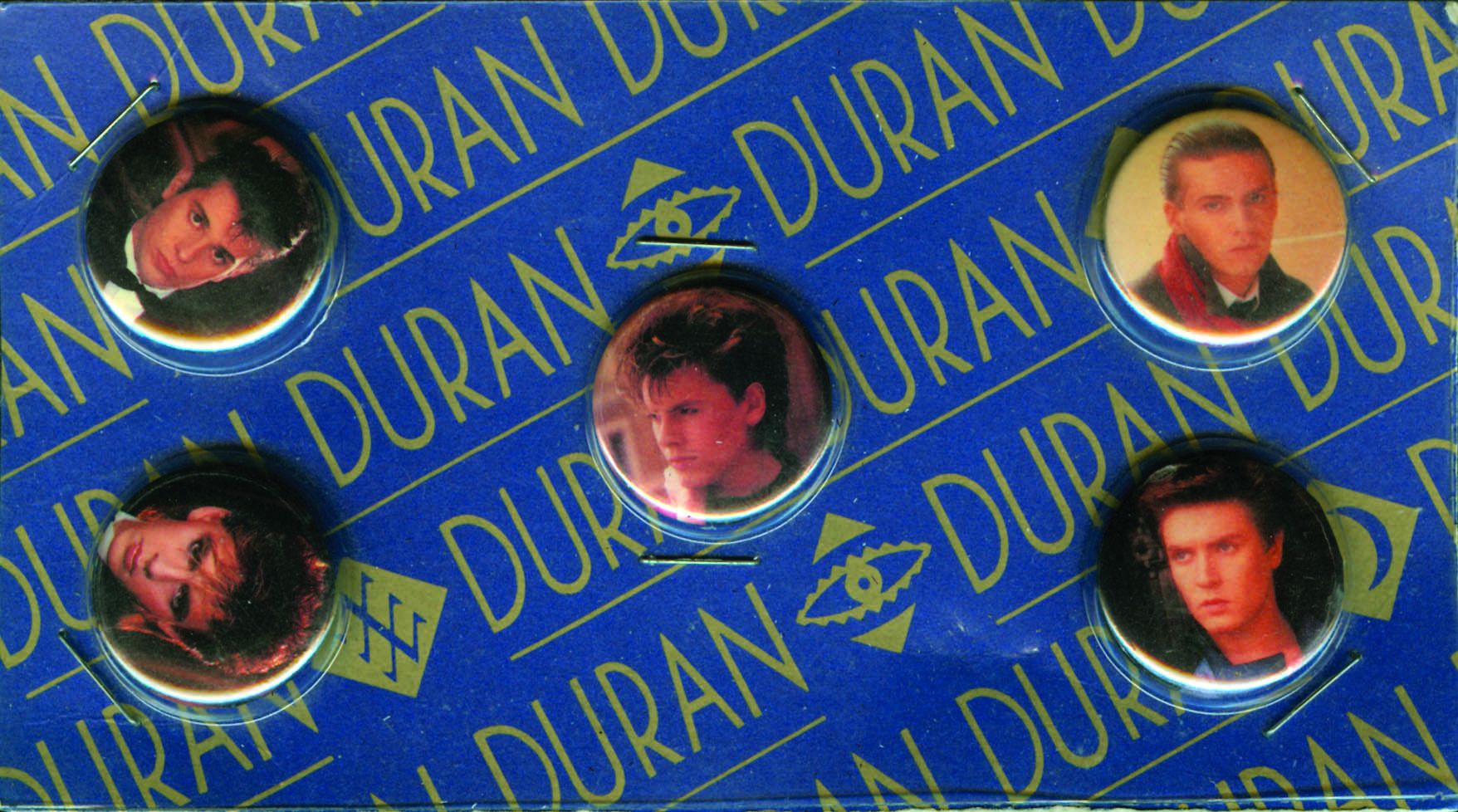 One of the most enduring collectibles for any artist has to be the pin-back button. Also called a badge, or simply "button," this item can trace its history back to 1789, the time of the first US presidential inauguration when supporters of George Washington would sew buttons with printed slogans onto their lapels. The first Presidential button with a photograph on it was of Abraham Lincoln in 1860. In 1893, Benjamin Whitehead patented the classic button design, adding a piece of clear film over the front of the photograph to prevent it from damage. In 1896 he patented the design of the safety-pin back, still in use today.

The idea of adorning your clothes with pinned on accessories is clearly nothing new, and the word ‘badge’ has, for centuries, referred to an item attached to one’s clothes, whether made of fabric, metal, plastic or other material. Most people think of a Sheriff’s badge or military insignia, but the souvenir pinback button falls under the larger umbrella of decorative badges, and the words are generally interchangeable.

The first Duran Duran badge, above, was made in 1980 and widely distributed on the band's tour supporting Hazel O'Connor in November and December 1980. This item’s condition has sadly suffered over time. When brand new, the background was white but now the materials are breaking down and causing the paper to discolour.

The first Duran Duran badge produced in large numbers was from early 1981 (above). Available via the fan club, it was sent out for free in very early fan club packs and sold at shows on the first UK tour in July 1981.

Duran Duran produced a number of higher quality metal and enamel badges. This was also from 1981 and was sold via the fan club.

The badge above was sold via the club starting late 1981, based on the art from MY OWN WAY done by Malcolm Garrett and Peter Saville. Saville is best known for his work with Factory Records, most notably Joy Division and New Order.

The first Duran Duran pinback that wasn't circular was released at the time of RIO. It was even more widely distributed, first available via the fan club or at shows, but eventually sold at shops too.

The "Is There Something I Should Know" badge is much like the RIO badge, as it was first sold via the band's fan club and then licensed for retail.

One of the rarer Duran Duran badges is the one above from the MENCAP charity show at Villa Park in Birmingham on July 23rd, 1983. The badge design is essentially the same as ITSISK, but remade in claret and blue, the colours of the Aston Villa football club. It was available at the one-off show and in limited amounts to fan club members.

The SING BLUE SILVER tour marks the first time Duran Duran sold badges as a set. Using photos by Rebecca Blake, they come presented on a printed board with a clear cover.

Frank Olinsky's wonderful design work on the NOTORIOUS project carried over into the tour merchandise. This badge set features photos of the band along with the icons from the on-stage projections for SAVE A PRAYER.

(Fast forward to the band's ASTRONAUT tour...they brought "back" badges and sold them on the road.

Tweet or Post to @duranduran and tell us what cool badge you were you proud to display on your lapel!