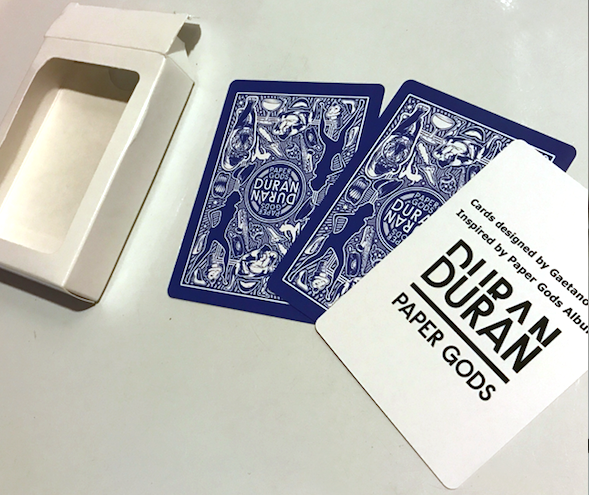 BOW TO THE THE PAPER GODS...

It’s hard to believe it has been two plus years since the release of PAPER GODS, and even harder to believe that the band's tour to support the album ended in September 2017 with two shows in Japan. This month let’s look back at some of the more interesting collectibles from this great album.

One of the earliest available items was the FAN EDITION CD of PAPER GODS. This CD was available by pre-order and came with a paper ‘fortune teller’ and a set of stickers to create your own cover. Also available at the time was a t-shirt and a complete package that included the album on vinyl.

Possibly the most luxurious item released in the PAPER GODS cycle was the limited edition box set from the Vinyl Factory. Limited to 350 copies, the set contained four 12″ white vinyl records in bespoke sleeves, housed in a custom-made magnetized clamshell box set.The albums had the full set of songs from PAPER GODS including AS SEEN FROM A DISTANCE, two remixes of PRESSURE OFF only available in this set, and seventeen kiss cut magnets, four art prints screen printed on Rainbow mirri board, and a thirty-six page booklet printed on 150gsm silk paper stock.

One of the more unique items from the PAPER GODS campaign was this deck of playing cards, designed by ELGAE from Italy as part of a CREATIVE ALLIES contest where fans could enter to design the item. Warner Brothers produced the cards in a very limited run.

"Last Night in the City" was the second single from PAPER GODS, with several new remixes done by producers including TOKiMONSTA, KANT, Louis Vivet and Koishii & Hush. This promotional CD features three mixes, though only the Koishii & Hush mix appears on the VINYL FACTORY set mentioned above.

It was a special occasion when Duran Duran returned to Japan and the market celebrated their arrival!

This handbill, or chirashi, from Japan advertises the shows in Tokyo and Osaka. Music retailers still thrive in Japan, and this sort of item is found free at stores like TOWER RECORDS.

At the shows, concert VIPs got some really nice exclusive merchandise, such as this carrier bag and poster.

Tadanori Yokoo (横尾忠則) is a Japanese artist and graphic designer whose work has been exhibited all over the world. This poster, which will be available soon in a limited edition in the DD Web Shop, was the result of his collaboration with the band. It will truly be a collectible item!

This final item is a great piece, the limited edition ‘rear-view’ backward logo hat made available by popular demand after photos surfaced of the one and only bass-man wearing one. With one of these, never again will your friends and family look at your selfies and say; 'What's a NARUD NARUD?'

With plans to return to the studio and the upcoming celebrations for the band's 40th anniversary, it seems like DD collecting won't be coming to an end any time soon!