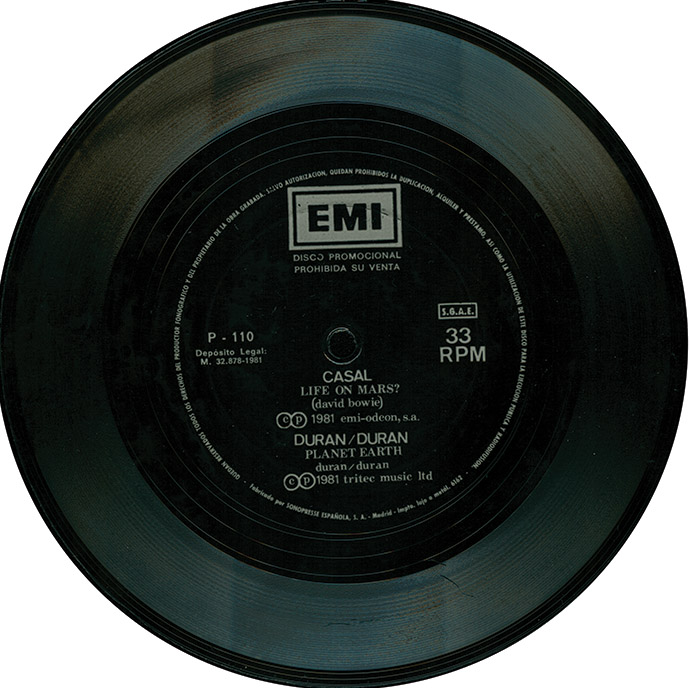 Do you know what a 'split seven inch’ is? If not, then you've come to the right place! “Split” releases feature two or more artists, and though often associated with DIY and indie labels, splits have been used by record companies for decades as a way to expand the reach of likeminded bands.

Take, for instance, this NEW BRITISH INVASION split seven from Canada (1982), which is a wonderful example of a label trying to make the most of the surge in British music in 1982 - including a band called Duran Duran. Considering the achievements of most of these bands, this release would have been a great success for the record company.

12-inch singles are less common in Japan than the rest of the world, and some of the rarest records in the Duran Duran discography are promotional split 12 inches from Japan. Often the B-side artists are highly collectible in their own right, and no better example exists than this rarity (1981), with two versions of PLANET EARTH on side A and two songs by Kraftwerk on side B, including DENTAKU, a Japanese lyric remake of their song POCKET CALCULATOR. The enthusiasm of Kraftwerk collectors means very few of these have changed hands in recent years.

This 1981 compilation from Brazil features DD as well as Classix Nouveaux on the A side, and The Undertones and The Vapors on the B side.

This 1981 released oddity comes from Spain: It's a split seven-inch flexi disc that features PLANET EARTH on one side and a cover of Bowie's LIFE ON MARS? by the Spanish singer Casal on the other. Hmmmm...

Some splits are more high concept than others. A good example would be this release from MANIMAL records, an indie label from Los Angeles that released a split seven inch with Duran Duran and Carla Bruni as part of their 2010 David Bowie tribute project. This gem was released in the first edition of 1000 where 300 were pink vinyl, 300 were clear vinyl and 400 were black. When these quickly sold out, a run of 500 yellow vinyl was made.

Of course, vinyl is not the only medium where a collector could encounter a ‘split’, as many ads feature more than one artist. This TAMA drum advert from 1984 features Roger and two of his peers advertising very early electronic drums.

How about the cover of a magazine? The split cover approach was common in American magazines in the 1980s, such as this KEYBOARD WIZARDS magazine from 1985.

Then there’s the split bill concert, where neither band is considered the headliner, such as this Duran Duran show in 1982 at the Ontario Theatre in Washington, D.C.

Of course over the years Duran Duran has graciously shared the spotlight many other times. Why not share some of your faves on our socials! Until next month, the Collector’s Corner will just make like a banana and...(groan!)