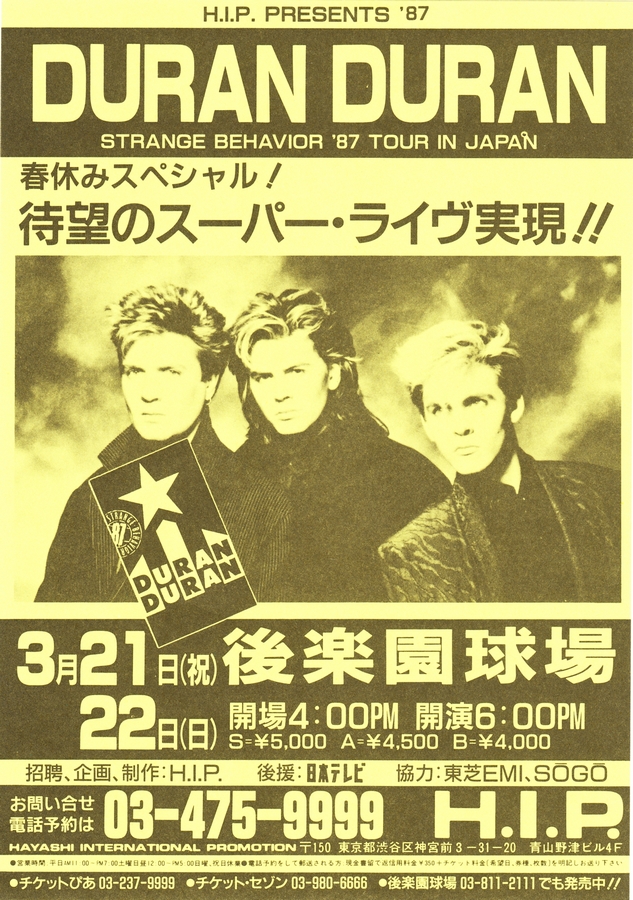 2017 marks the 30th anniversary of the STRANGE BEHAVIOUR tour. A lot had happened for Duran Duran since their well-documented SING BLUE SILVER tour. The band had become a three piece, but with the help of Nile Rodgers, Steve Ferrone, and Warren Cuccurullo, they went on to make the NOTORIOUS album, released in November 1986.

The STRANGE BEHAVIOUR tour began in Fukuoka, Japan on March 16th, 1987 and moved on to Europe, where the band performed in many places they hadn't been to in a long time and went to some places like Italy, Spain and Austria where they had never played before. The final European date was on June 7th, 1987 in Florence, Italy.

The next leg of the tour was North America, and the first show was in Worcester, MA on June 18th, 1987. The tour made stops all over Canada and the United States, including the band's first visit to Puerto Rico for two shows on August 7th and 8th, 1987.

On August 12th, 1987, Duran Duran started their run of shows with David Bowie on his GLASS SPIDER tour, ending on August 30th in Montreal, QC. On August 31st, the band played a benefit at the Beacon Theater in New York for The Association to Benefit Children. One of the highlights of this show was Lou Reed joining the band on stage to do a cover of his song "Sweet Jane."

On January 8th and 15th, 1988, two shows in Brazil were added to the tour, the band's first appearance in South America.

Like the SING BLUE SILVER tour, the STRANGE BEHAVIOUR tour merchandise made the most of modern print technology, such as the tour book's die-cut front cover and inner pages including foil, fold outs, and multiple inks. This programme, designed by Frank Olinsky at Manhattan Design, really set the pace for Duran Duran tour books that would follow.

The poster book below is one of the more rare collectibles from the STRANGE BEHAVIOUR tour. The posters were bound so that they had to be cut out of the book, so very few are to be found in "as new" condition.

Often the rarest items to collectors are things designed to be thrown away, ephemeral things like this handbill that was left on seats at shows in Europe. This beautiful poster doubles as an advert for the album and the singles, as well as the fan club.

The STRANGE BEHAVIOUR tour was Duran Duran's largest global jaunt to date, taking them to many new places. The state of the art sound, lighting, and video production was wonderfully captured in WORKING FOR THE SKIN TRADE. Released in June 1988 on Beta, VHS, and LD, the 57 minute concert film was directed by David Gasperik and featured 9 songs.

Did you see a show on the STRANGE BEHAVIOUR tour? We want to hear about it! Post your stories on Duran Duran's social media channels.