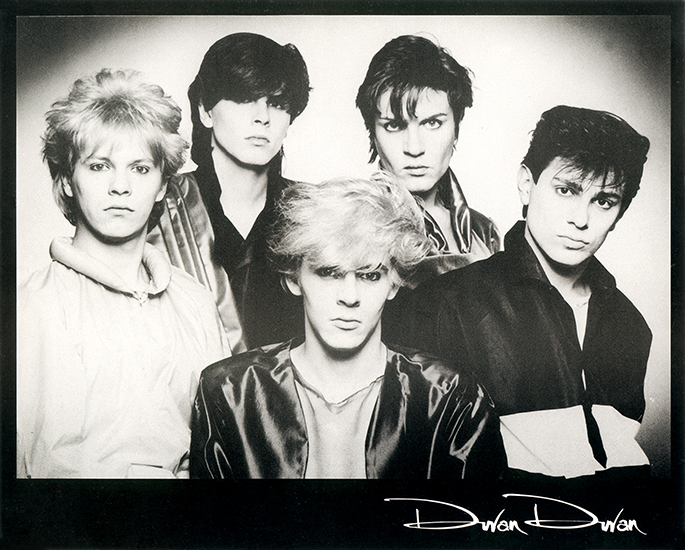 The first press release ever was sent on October 28th, 1906. Ivy Lee, a public relations specialist working for Pennsylvania Railroad, suggested the company send out a public statement after an accident where a train crashed into the Thoroughfare Creek near Atlantic City, New Jersey and 50 people perished. Lee's thinking was that the company could use the statement to stay ahead of rumours, gossip and hearsay. The New York Times printed the press release, word for word, on October 30th, 1906 thus setting a framework that still exists today. As technology improved, the press release morphed into the press kit. The press kit added photos and other items such as press cuttings and lyrics.

For our purposes, the process really got going in 1980 with the first press photo of the 'classic' Duran Duran lineup. The photo, produced in limited numbers, was taken by Allan Ballard and the logo was designed by John Warwicker. This first DD “press release” was sent out locally in Birmingham to try and book shows as well as being sent as part of a package to record companies in an effort to secure a recording contract.

When the band was signed by EMI records at the end of 1980, they turned a corner in terms of their ability to get the word out to the press. EMI had honed their media relation skills with the Beatles, and one of the reasons the band chose EMI was this connection. The first press releases sent out by EMI was at the time of the release of PLANET EARTH in February 1981.

When the DURAN DURAN album was released in June of 1981, EMI sent out a variety of materials to all facets of the media. This included up to 8 photos, press cuttings, reviews and lyrics. In the United States, the American arm of the label, Harvest, sent out a press pack in a beautiful custom envelope. Depending on which outlet this was being sent to, it included a photo, press releases, custom lyric sheets and reprints of some reviews and articles from the UK press. Some press kits were sent out with copies of the album as well. Finding a copy of this press kit in good condition is very hard.

In 1982, the success of the first album and the imminent release of the second album had EMI's Press Office working overtime getting the word out. Advance copies of the RIO album were sent out with some interesting items. In Australia and France, a handful of journalists got a package with the album and press materials inside a blue custom folder. In the USA there were photos and all new media information as well as an assortment of article reprints and reviews.

1983 took the intensity of the previous two years and added to it. By the time SEVEN & THE RAGGED TIGER was released in November 1983, the staff at EMI worldwide had produced press materials for nine singles and two albums in the UK and elsewhere. What makes this both exciting and exhausting is the idea that every pack had great potential for variance. As a collector, this can be maddening. Some packs would only contain press releases and reviews. Some might contain one photo and others two or more. It is not unheard of for a collector to buy a 'complete' press kit only to find another one later with a unique photo or added lyric sheet or cutting copy that was missing from the first purchase.

Of course, there has been so much press material on Duran Duran over the years that we have just scratched the surface of it. Like many of our topics, this one can't be adequately covered in one installment… So we will come back into the Media Centre again and pick up where we left off. But we'll leave you with this wonderful item: A 1984 French press photo from PATHÉ MARCONI-EMI. This photo is interesting because at 25x20 centimetres, it doesn't conform to the more standard 8x10 inch size.