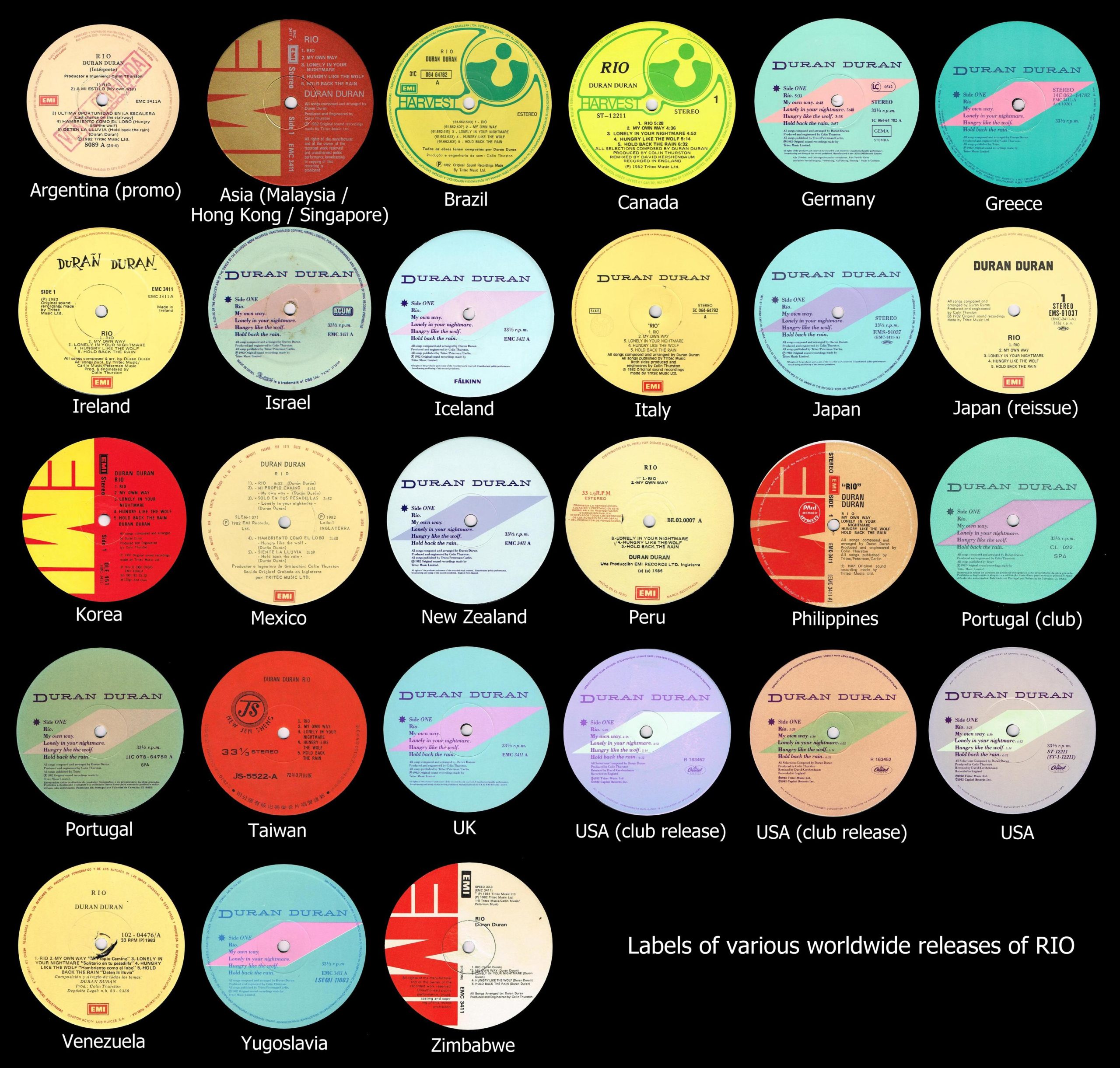 At the end of 1981 Duran Duran started writing and recording their second album RIO. The album was released in May 1982, so this Collector’s Corner seemed like a good time to celebrate it!

Duran Duran’s RIO is one of the band’s best selling albums, and has been certified platinum multiple times in several different countries. It remained in the US Billboard Top 200 Album chart for almost two and a half years with the help of the hit singles “Hungry Like the Wolf,” “Save a Prayer” and “Rio.”

For collectors and completists, ‘Rio’ is a genre defining album, and as such, no other album of Duran Duran’s has been released in as many different formats. Let’s take a look:

The original album had been released almost everywhere in the world; however in November 1982, North America got their first re-issue of the album. The complete A side of the original album was re-mixed by David Kerschenbaum, making it different from the May release. This re-issue (which many people think is actually the first pressing of the album) exists in two versions; one has the shorter remixed versions of “Hungry Like the Wolf” and “Hold Back the Rain” and the other has the longer versions of these two tracks.

Over the years, many CD versions of RIO have been issued, some with the original track listing, and others with bonus tracks and/or video files. Japan already has more than 10 variations of RIO, all with a different OBI-strip.

Other interesting releases are the vinyls from Japan, in which the first 30,000 copies contained a large band poster, the promo copies from Australia and Italy that were sent out in a sparkling blue 12” paper envelope with the RIO logo printed on it, and the very rare promo release of the album in Uruguay. On the sleeve of this promo, the purple colour has been replaced by a bright blue colour. The Uruguay promos are especially hard to find a good copy of.

Another promotional piece of RIO vinyl which is really worth looking in to is the Australian Radio Special. This promo LP had been issued by EMI Australia and each song is introduced by Nick and John.

If you happen to own a few different pressings from around the world, you may notice some small differences and slight colour variations on the sleeves. Check out these images that highlight the different sleeve art and labels for the worldwide releases.

In 2009, EMI released RIO as a digital remaster with a 2-disc CD set that included the original album and the David Kerschenbaum mixes, along with demos, non-album tracks and the Night Versions. In addition, the packaging on a limited edition version of this release included an alternate version of the famous Nagel RIO cover painting. This re-mastered version also came out in several territories on vinyl.
Once again the anniversary of RIO was celebrated with yet another release, this time from Warner Brothers: the above mentioned 2009 CD (no longer available) will now be re-issued in digipack, available next month.

Let us know on the Duran Duran facebook page how many versions of RIO you have in your collection, and which is your favorite!