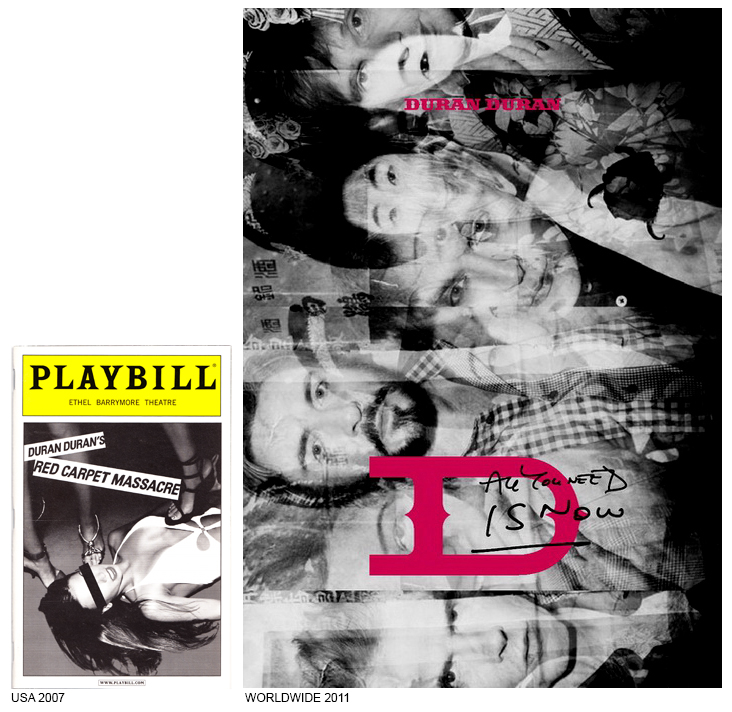 The exciting news about Duran Duran live dates in the new year has brought a real buzz to the start of 2015! And what better way to celebrate live performance than with a look at the history of the tour programme.

The programme was first introduced in seventeenth century theatres, where hand-written booklets would be distributed to the audience detailing the cast, crew and other production notes for the evening's entertainment. As printing became cheaper these books became more mass produced and are now a fixture of every theatre performance from high school plays to Broadway and the West End.

With the boom of rock and roll in the late 1950s, the demand for souvenirs for the modern pop star rose. Called tour books in the United States, these became one of the most popular concert souvenirs. Forward to 1981 during Duran Duran's very first national tour and one of the best selling merchandise items is the programme.

The tour programme as Art object had a boom in the 1970s when artists like Bowie and Roxy Music set a new standard in sublime visual style. The tour book was transformed from a way to convey information into an expression of the artist or band's persona, and giving edgy designers a vehicle for some of the nicest graphic design work committed to print.

Ever innovative, Duran Duran have worked hard to design books that break the confines of traditional playbill page size and styling. The smallest is an actual theatre playbill from the band's historic run on Broadway in November 2007. The largest is the ALL YOU NEED IS NOW tour book.

If size doesn't wow you, how about a band that breaks the dimensional barrier? The tour programme for the 2005 ASTRONAUT tour was a gorgeous 3-D pop up book designed by John Warwicker. The book contained 2 pop up sections and many bonus materials including a manga-style comic book, fact cards and even cut-out figures of the band members.

Since their founding in 1978 Duran Duran has played over 20 major tours. That's a lot of tour programmes to collect! We'll feature some more in a future segment, but if you'd like to know more about Duran Duran's live performances head over to the complete tour list on the TIMELINE page of Duranduran.com!