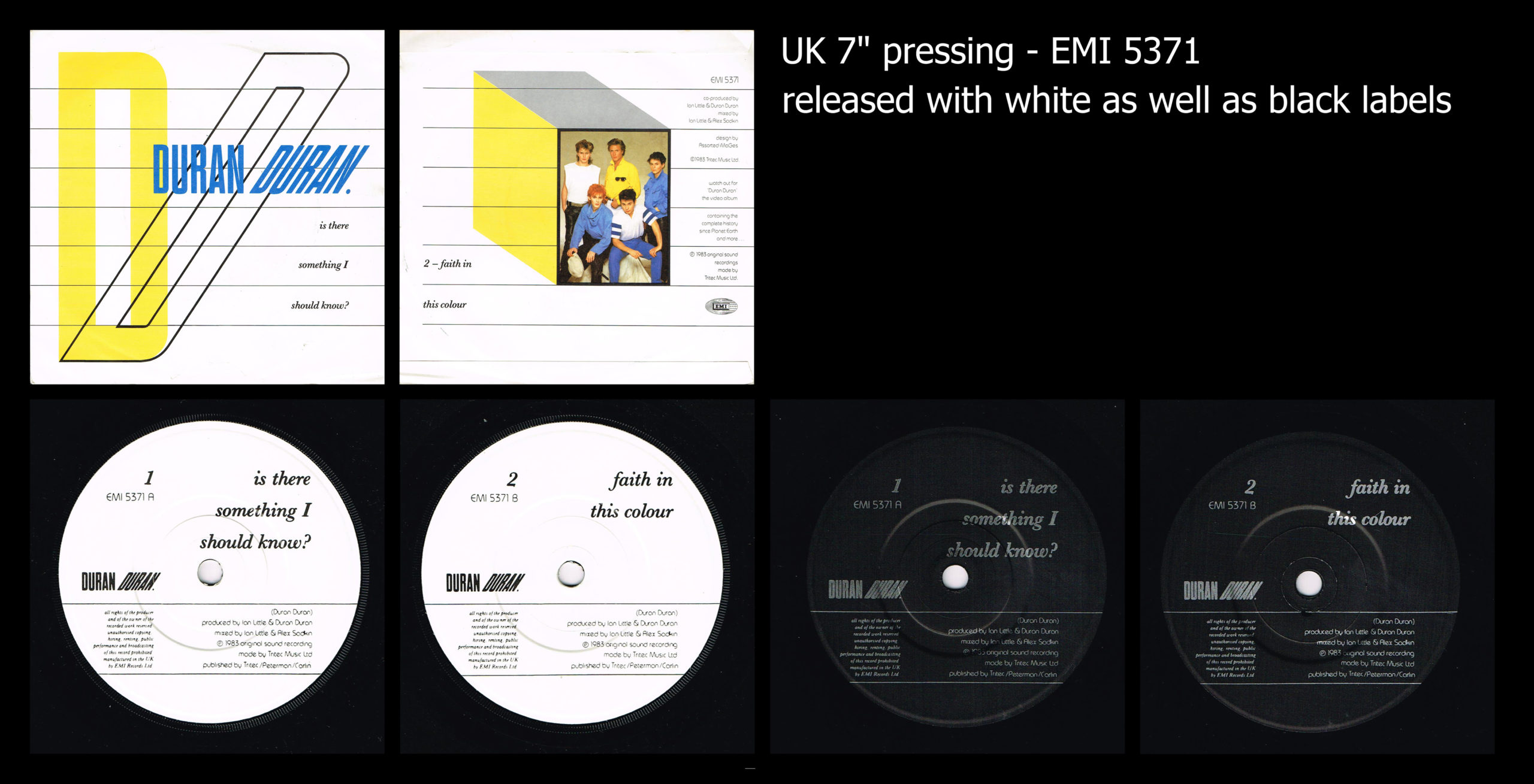 There’s A Dream That Strings The Road

This month marks the anniversary of the release of Duran Duran’s “Is There Something I Should Know?” one of the most recognisable tracks the band released in the 80s.

Rocketing to the top position of UK Top 40 on the week of release, this single was Duran Duran’s first no. 1 hit in the UK. The track was a huge success in the USA, reaching no. 4 on the Billboard Top 100. The song was released in over 20 different countries. Of note is the fact that the song was originally released as a standalone single. However, in a few territories it was included on the 1983 re-release of Duran Duran’s debut album.

All pressings of the seven inch single has “Faith In This Colour” as a b-side, except in the United States and Canada, where “Careless Memories” is the b-side.

A little known fact: if you check out the matrix number (the code which is stamped or engraved in the vinyl) of the UK pressing, it will reveal which version of “Faith In This Colour” is pressed. Two versions of this track exist; the regular version and the slow version. If the matrix no. of the b-side reads ‘EMI 5371 B-1U...’ then it has the slow version! All others have the faster version of the song. Decades later the slower cut appeared on the singles CD box set (released in 2003) and on the CD version of the 2010 re-release of “Seven and the Ragged Tiger”.

Back to the single! All of the worldwide releases are true to the UK artwork, designed by Malcolm Garrett of Assorted Images, with a few exceptions. For instance in the USA and Canada, the frontside shows a picture of the band, in Mexico the sleeve is printed in black and white, and the Spanish cover has the translation of the track title “Hay Algo Que Debiera Saber?”. In Japan, two kinds of sleeves were issued: a regular one with portrait pictures and a poster sleeve.

A 12” was released as well, with the addition of an almost completely instrumental remix, of the song known as the ‘Monster Mix.’ ( Usually, the 7” b-side is also included on the 12”, however on the US and Canadian pressings of the maxi-single, “Faith In This Colour” is included instead of “Careless Memories.” In addition, the sleeve art for these 12”s differ from the UK 12” sleeve art. The colours white and blue have been switched. Although the US promo 12” is almost the same as the UK art, it does not have the ‘Monster Mix’ included, only the single mix of “Is There Something I Should Know?” which is featured on both sides. Got all that?!

To commemorate its 30th year anniversary the single was re-released for Record Store Day in April 2013. This limited edition was pressed on fresh blue coloured vinyl and sold out very quickly.

Which copy of this single is in YOUR collection?