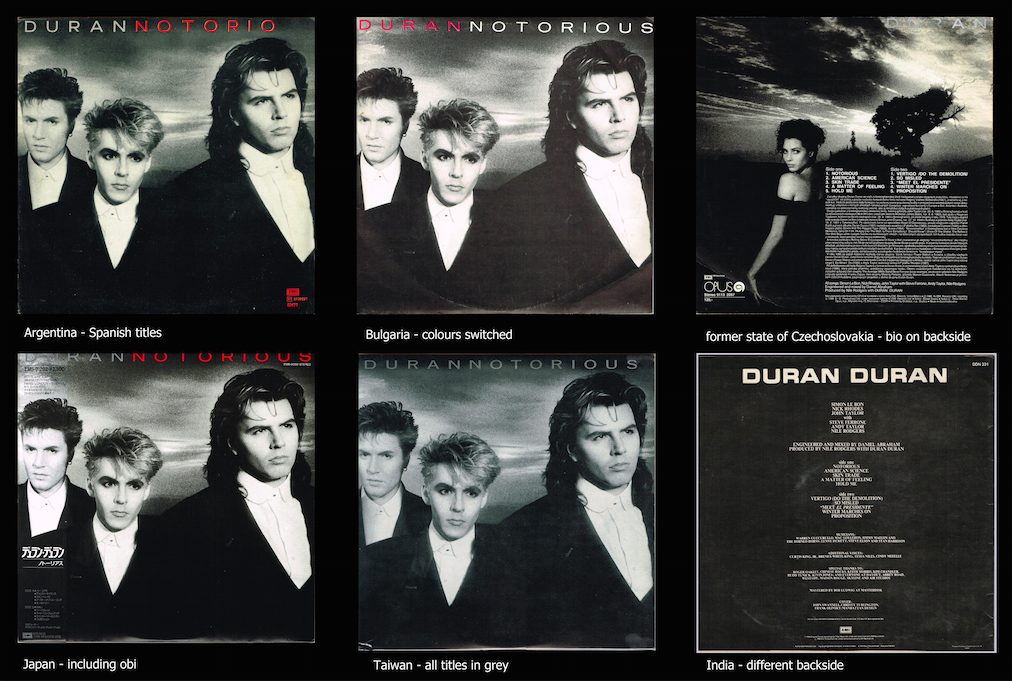 In November, 1986 Duran Duran put out the album NOTORIOUS worldwide. Having paired down to a trio, the band got creative in what would turn out to be a seminal release for them. Simon, John & Nick teamed up with Nile Rodgers, who they had worked with before on several tracks, and brought some funk in to the Duran canon.

This was an important time for the band. After the success of “Seven and the Ragged Tiger” and “A View To A Kill,” this album was a statement from Duran Duran. NOTORIOUS was the first album released after Andy and Roger left, John wound down his time with The Power Station and Simon and Nick did the same with Arcadia.

The band had three singles at the ready: The title track, “Notorious,” horn-heavy (and fan-favourite) “Skin Trade” and “Meet El Presidente.” The latter got a heavy remix treatment for its release. The tracks “American Science” and “Vertigo” were also potential singles at the time, and because of this, extended remixes were commissioned and later used on the “Master Mixes” EP in 1987, released in the USA, Brazil and Asia. The track listing in the USA was: "American Science" (Chemical Reaction Mix), "Vertigo (Do The Demolition)" (Mantronix Mix), "Skin Trade" (Parisian Mix), "American Science" (Meltdown Dub), "Vertigo (Do the Demolition)" (B-Boy Mix) and "Notoriousaurus Rex" (Master Mix). In Brazil it was: "Meet El Presidente", "American Science" (Chemical Reaction Mix), "Skin Trade" (Parisian Mix), "Vertigo (Do the Demolition)" (Mantronix Mix), "Notorious" (Latin Rascals Mix) and "Notoriousaurus Rex" (Master Mix). Some of these hese mixes were later found on the 1999 ‘Strange Behaviour’ remix 2-CD release. More recently, some were featured on the 2010 re-release of the NOTORIOUS album.

Equally important for the band was the look of the album. The artwork for NOTORIOUS, and the singles, were designed by Frank Olinsky, an extremely well-known NY designer who had created the MTV logo . With its grainy black and white cover photo taken by John Swannell, featuring supermodel Christy Turlington, it’s one of the band’s most well known images.

As with many of Duran Duran’s releases, there are a few minor differences with the cover art in various territories. In the UK, the word “Notorious” was embossed in silver, while it is gray on most other releases. In Bulgaria (!), the word “Notorious” is written in red and “Duran Duran” in grey. Of note to collectors is the release from Venezuela, which came in a gatefold sleeve. Fans from Japan were treated to some surprises when they bought the album; some contained a poster, others contained a sheet of stickers, and others a laminated card.

NOTORIOUS had been released all over the world with the same track listing, except in Korea. For some reason “Skin Trade” has been deleted from the original 1986 release, and rumour has it that the lyrics did not comply with the country’s decency code. However, two years later, “Skin Trade” does appear on the Korean version of the “Decade” album.

Another question concerning the Korean release is the lyric sheet. It seems the correct lyrics were not supplied to the Korean record company, which resulted in some questionable phrases. The opening line of the song “Notorious” is “No-No- Notorious.” However, in Korea, the lyric sheet says “Knock Knock Notorious”! Check out the sheet and see if you can find more obscure phrases!

So in honour of the anniversary of the album’s release (which was this past Tuesday), it’s time to get out your copy and get groovin’!