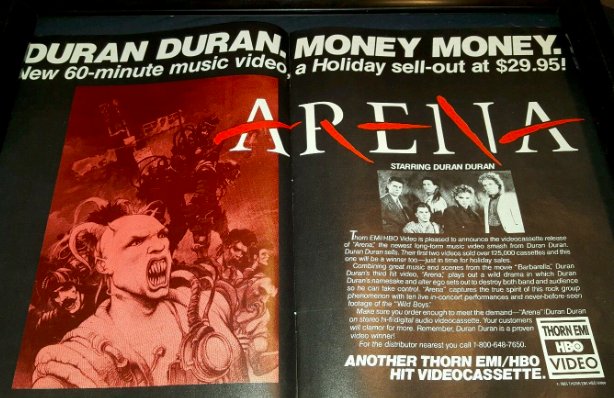 HOW TO GET AHEAD IN ADVERTISING - PART ONE

One of the categories of music collecting that you don't often hear about is advertising. Ads can make for some interesting collectibles, as they are totally unique to the country, year and publication in which they appear. This month we've chosen some unique examples from the world of DD advertising.

One way UK music fans would find out about new bands was via adverts placed in the music press. Staples like NME, Melody Maker, Sounds and Record Mirror were the hottest place to get exposure for a young up-and-coming group. Advertising was costly, and fortunately Duran Duran were backed by EMI, who wanted to give the band’s first single a solid push.

Industry insiders need to be aware of new groups too, so trade magazines like Billboard was a good place to find what labels were planning to release. Duran Duran has had many well-designed trade ads over the years, including this ad from early 1985.

Advertising can become so collectible because it is often localized. If a band is coming to your town, there might be an ad for an upcoming concert in the local newspaper around the time the tickets go on sale. Here you can see two ads that ran in a Toronto newspaper to advertise the Power Station concert in August 1985.

A great (and collectible!) ad promoting a DD concert ran as a full back page advert in JUKE magazine in Melbourne, Australia, in the April 17th, 1982 issue.

When there were record stores, music shop displays were another cool way a release was promoted. EMI knew the value of making a nice, large, eye-catching display, such as this one featured below, promoting Duran Duran’s debut album. This display is over a meter in length, with a space on the bottom right corner where the shopkeeper could put a copy of the album.

And of course, no piece on Duran Duran advertising would be complete without mentioning the one that has been part of the band's folklore. This handwritten advert from 1979 could have possibly been put up in a record store, on a phone box or just handed out to anyone who might fit the bill....