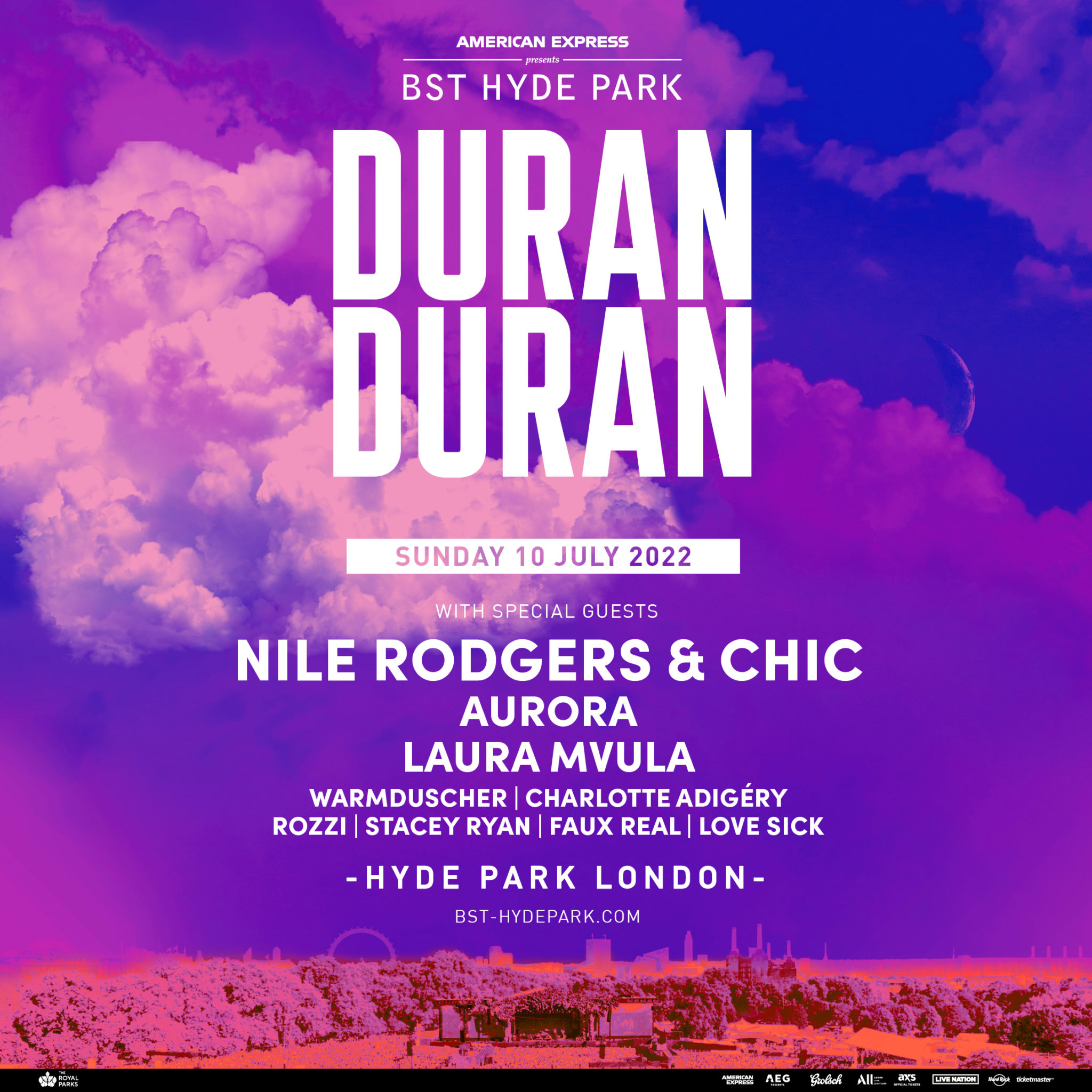 A show that’s been in the making for over two years is finally here! Next month, Duran Duran will headline American Express presents BST Hyde Park to close the extraordinary 2022 edition. One of the most iconic and ground-breaking bands to come out of the UK in the past four decades, Duran Duran will close this year’s BST Hyde Park in London’s greatest outdoor venue on Sunday 10th July. Today, we are delighted to announce the full festival line up: Aurora, Laura Mvula, Warmduscher, Charlotte Adigéry, Rozzi, Stacey Ryan, Faux Real and Love Sick, joining legendary previously announced headliners Nile Rodgers & CHIC.

AURORA makes her BST Hyde Park debut this summer. Mixing frosty electronic textures, spare beats, and clear, emotive vocals, AURORA works in a similar dark pop milieu as artists like Oh Land, Lykke Li, and Lorde. Her debut album, All My Demons Greeting Me as a Friend, went to No.1 in her native Norway upon its release in 2016. Her latest album, an ethereal, electropop record The Gods We Can Touch, saw her claim her first ever Top 10 UK position in the charts earlier this year and we can’t wait to catch it live.

Mercury prize nominated Laura Mvula will take to The Great Oak Stage this July and the acclaimed singer, songwriter and composer Mvula will no doubt continue to captivate the crowds for her BST Hyde Park show as she does every audience who is lucky enough to see her live. Laura’s third album, Pink Noise has seen critical acclaim across the board, with a new-found light that reflects her distinctive signature sound and shows the progression of an artist who has come into her own.

London based post-punks Warmduscher will be bringing their raucous live performance to the festival. Hailed by NME as “deliciously grotty”, the band’s latest experimental album, At The Hotspot, was released earlier this year on Bella Union.

Simon Le Bon says, "It's an extraordinary lineup - it so happens that I've featured five of the acts on my radio show, WHOOOSH! - looks like I'll be spending the entire day dipped in music."

John Taylor says, "We are incredibly excited for Hyde Park with so many sensational guests like Aurora and Warmduscher, and our old friends Nile Rodgers & Chic. We have curated the lineup with many new artists played on Simon's SIRIUSXM radio show, WHOOOSH!, and cannot wait to bring the music to the fans and music lovers, many of whom have had their tickets for two years. It's going to be a good day!"

Roger Taylor adds, "I am so excited to be playing at BST in Hyde Park. More than 40 years after the inception of the band, it feels like a really iconic moment in our history. I'm so honoured to be part of a truly eclectic lineup of musicians, from the legendary Nile Rodgers & CHIC, to amazing young artists like Charlotte Adigery and Laura Mvula."

Duran Duran are set to be honoured as inductees for the 2022 Rock & Roll Hall of Fame at the 37th Annual Ceremony, taking place November 5th at the Microsoft Theatre in Los Angeles, California.

Few have celebrated such global success and still hold major headlining status. This is Duran Duran’s BST Hyde Park debut, and their only London show for 2022. Their much-lauded live shows blend classics including “Hungry Like the Wolf,” “Pressure Off,” “Rio,” “Girls on Film,” “(Reach Up For The) Sunrise”, “A View to a Kill” and countless others with the best new fan favourites, including material from new album, FUTURE PAST.

A longstanding collaborator of Duran Duran will be returning to BST Hyde Park this summer. The legendary Nile Rodgers will bring CHIC back to Hyde Park for the first time in 7 years; the last show he welcomed audience members onto the Great Oak Stage for a live disco and singalong. Among music legends, Nile Rodgers is truly exceptional. He amplifies his legacy as a multiple Grammy-winning composer, producer and guitarist by constantly traversing new musical terrain. As the co-founder of CHIC, Rodgers pioneered a musical genre with hits like "Le Freak," and "Good Times". Nile Rodgers transcends all styles of music across every generation with a body of work that's garnered him his induction into the Rock & Roll Hall of Fame in 2017. Duran Duran worked extensively with Rodgers after he produced their hit single, "The Reflex" in 1983, followed by "The Wild Boys" for inclusion on their 1984 live album Arena. Rodgers also co-wrote, produced and performed on tracks on the band’s 2004 album Astronaut and 2015’s Paper Gods. Recently Nile joined Duran Duran on stage to perform as part of the Queen’s Platinum Jubilee Celebrations… Fingers crossed for another reunion between the two iconic acts!

Previous Article
Duran Duran announce full line up of support acts – including Laura Mvula and Nile Rodgers – who will join them at the closing night of the BTS festival in Hyde Park
Next Article
EXCLUSIVE: Duran Duran ‘jumped at the chance’ to play Inverness, says bassist John Taylor
News
Back to all news