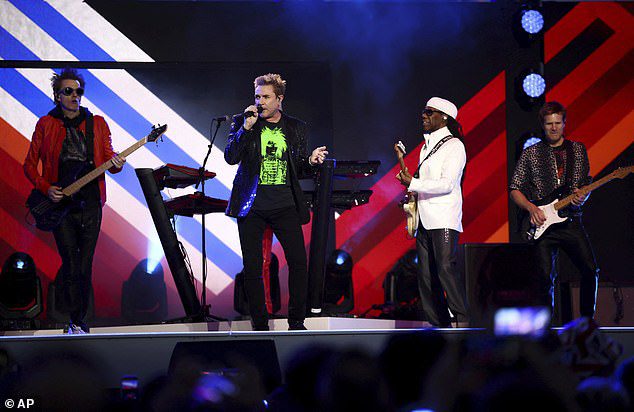 Duran Duran are set to headline the final performance of the British Summer Time festival to a crowd of 65,000 in London's Hyde Park on July 10.

And the group have now announced the full line who will join them on stage for the epic concert, including Laura Mvula and Nile Rodgers.

Nile Rodgers & CHIC performed with the band at the Platinum Jubilee's Party At The Palace.

Aurora will make her BTS debut mixing frosty electronic textures, spare beats, and clear, emotive vocals, AURORA and has worked with the likes of Lorde.

Her latest album The Gods We Can Touch, saw her claim her first ever Top 10 UK position in the charts earlier this year and we can't wait to catch it live.

Also on stage: Songstress Laura Mvula will also be joining the pop group on stage London based post-punks Warmduscher will also be bringing their raucous live performance to the festival.

Le Bon said: 'It's an extraordinary lineup - it so happens that I've featured five of the acts on my radio show, WHOOOSH! - looks like I'll be spending the entire day dipped in music.'

Duran Duran drummer Roger Taylor said: 'I am so excited to be playing at BST in Hyde Park. More than 40 years after the inception of the band, it feels like a really iconic moment in our history.

Adding: 'I'm so honoured to be part of a truly eclectic lineup of musicians, from the legendary Nile Rodgers & CHIC, to amazing young artists like Charlotte Adigery and Laura Mvula.'

While bassist John Taylor added: 'We are incredibly excited for Hyde Park with so many sensational guests like Aurora and Warmduscher, and our old friends Nile Rodgers & Chic'.

He continued: 'We have curated the lineup with many new artists played on Simon's SIRIUSXM radio show, WHOOOSH!, and cannot wait to bring the music to the fans and music lovers, many of whom have had their tickets for two years. It's going to be a good day!'

This comes as Duran Duran are set to be honoured as inductees for the 2022 Rock & Roll Hall of Fame at the 37th Annual Ceremony, taking place November 5 at the Microsoft Theatre in Los Angeles.

With a career that has seen more than 100 million record sales worldwide, 21 UK Top 20 tunes and 18 American hit singles, making them one of the most successful and influential bands of all time.

Few have celebrated such global success and still hold major headlining status. This is Duran Duran's BST Hyde Park debut, and their only London show for 2022. Their much-lauded live shows blend classics including 'Hungry Like the Wolf,' 'Pressure Off,' 'Rio,' 'Girls on Film,' '(Reach Up For The) Sunrise', 'A View to a Kill' and countless others with the best new fan favourites, including material from new album, FUTURE PAST.