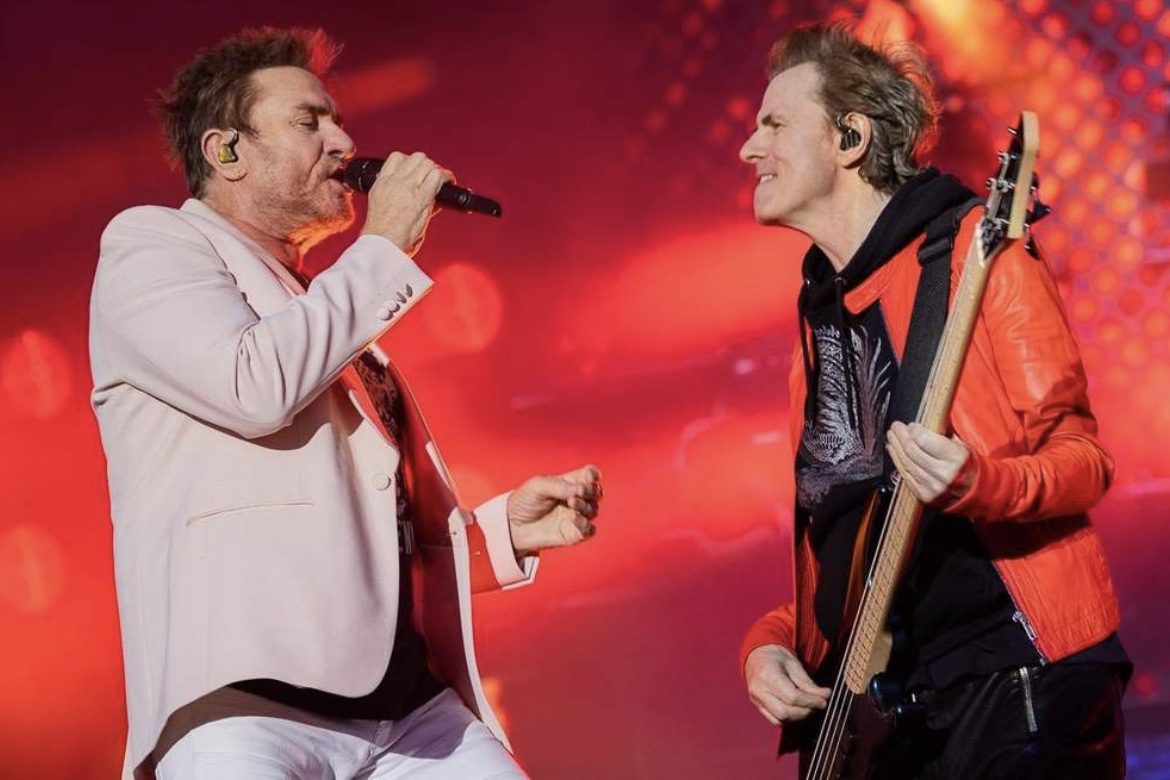 A series of concerts in the grounds of Castle Howard looked like a perfect way to spend those long summer evenings. Duran Duran’s appearance in the line-ups was one of the main attractions bringing many expectant fans of one of the 80s biggest acts to the stately home.

Intriguingly, one of the most interesting new bands to emerge out of the pandemic period were announced as support.

Dry Cleaning took to the stage before the main body of the audience managed to filter into the purpose-built arena. As Tom Dowse (guitars), Lewis Maynard (bass), Nick Buxton (drums) and the bewitching Florence Shaw (vocals) took to the stage they left huge gaps. The spaces were a good indication of how quickly Dry Cleaning have grown from small indie venues to a string of festival appearances this summer. This was a stage and arena built for bands with a global following. Their booking could open a new audience to this rising band. However, it was challenging as it spanned the same decades long gap that could have seen fledgeling New Romantics Duran Duran booked to support Bill Haley and The Comets in 1980.

Driving bass and drums power most Dry Cleaning songs with Dowse’s scratchy guitar giving their sound an edge. It is Shaw’s vocal that really sets them apart from the pack with her spoken words and dramatic facial expressions and hand gestures giving this a modern art feel. This was the major challenge of this support slot. Clearly the audience were here to see the old masters more than modern art. The short set is packed with great songs with Bug Collector, Magic of Meghan and Scratchcard Lanyard standing out. An appreciative scattering of applause means they will have made some new friends, but many won’t have appreciated the exhibition. Florence ended the set by saying, “We are supporting Duran Duran, we get to play this ginormous gig, cheers to them.”

The arena was filling up gradually as those inside waited patiently for the main event. Road crew were busy setting up significantly more equipment, filling the gaps that Dry Cleaning didn’t use. The crowd spent their time queuing at the inadequately catered food stalls, admiring the view of the stately home to the right of the stage, or queuing on the approach roads to the estate. The 15-minute delay to the headliner’s set was probably an indication of things to come later.

Duran Duran arrived to a rapturous welcome and launched into one of their big hits. Wild Boys sees John Taylor (bass) and Don Brown (guitar) flank Simon Le Bon (vocals) in the front line, with Nick Rhodes (keyboards), Roger Taylor (drums) and the backing singers bringing up the rear.

Le Bon has always stood out as a front man and he shone as the spotlights constantly picked him out in his pink jacket, white trousers, and ‘Rage Against The Enlightment’ T-shirt. He certainly kept the spotlight operator busy as he was constantly on the move save for those moments he shared with John Taylor at the microphone for choruses.

Taylor, in his red leather jacket, often shared the attention with his dramatic bass poses, with Brown equally busy on the other side.

New songs from the band’s more recent albums were scattered throughout the set, but this was a day for the big numbers. There is no shortage of those and the crowd never had to wait long for one to appear with View To A Kill, Notorious and Union Of The Snake keeping the crowd happy in the early stages.

Le Bon used the space between songs to entertain the crowd with a challenge of “What did you people do with the heatwave?” as the evening cooled. He even strayed into observational comedy with a story about his little pinky sticking out when holding his microphone since they had been inducted into the Rock And Roll Hall Of Fame. He was the glue in the performance spending time with each band member bringing them into focus. The backing singers were brought forwards with Rachel O’Connor singing the uplifting female vocal during Come Around and Amber Ross following shortly after during Give It All Up.

The weather even joined in the spirit of the event and treated the crowd to an amazing red sunset over the domed house. Attention was brought back to current world events as Le Bon introduced ‘Ordinary World’ with a dedication to Ukraine and a plea to ‘Never lose faith in the goodness of humanity. Never give in. Never give up hope’. The massive backdrop and the two video screens either side of the stage tuned into yellow and blue flags in a poignant show of support.

From this point on the hits appeared more frequently as the set was working it’s way to a climax. Planet Earth began the sequence, with Hungry Like A Wolf following on soon after. The rapid fire of a camera shutter announced the arrival of Girls On Film which blended into Calvin Harris’ Acceptable In The 80s as the main set came to a close.

The band left the stage, but there was little chance of them not re-appearing with the crowd screaming for more. They duly returned with an encore of The Chauffeur, Save A Prayer and Rio completing the greatest hits.

Few had left early to avoid the traffic and this is where the smaller logistical issues experienced so far turned into a much bigger problem. Many reported taking two to three hours to get out of the site and voiced their anger over social media. The comments about the concert have been overwhelming positive, but the parking arrangements and event organisation has caused much frustration. Maybe taking a tablet and watching the box-set of Brideshead Revisited would be an appropriate way of passing the time waiting to leave Castle Howard.

Previous Article
The Most Ambitious and Cinematic of Duran Duran, According to John Taylor and Nick Rhodes
Next Article
Duran Duran announce full line up of support acts – including Laura Mvula and Nile Rodgers – who will join them at the closing night of the BTS festival in Hyde Park
News
Back to all news