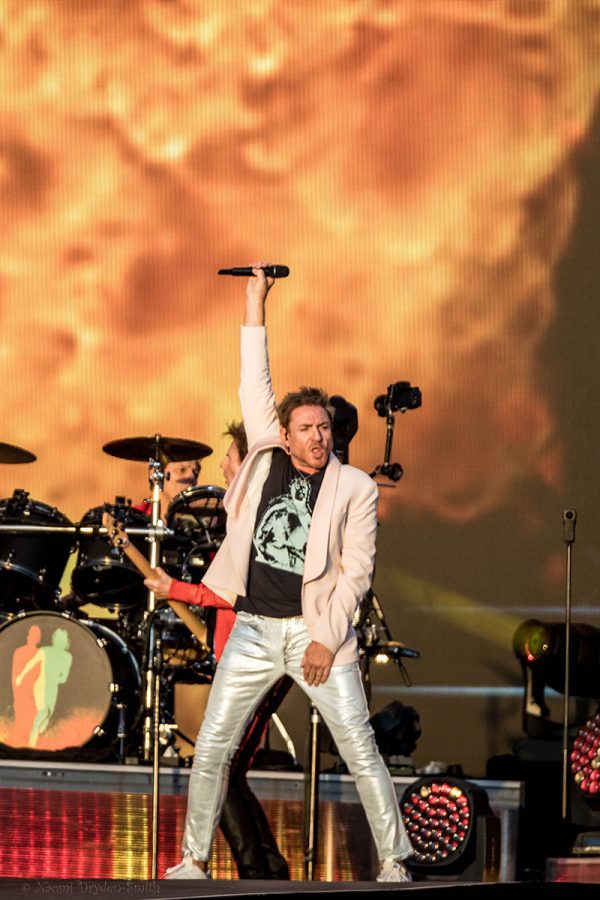 Curating the lineup for a day-long family music event like BST Hyde Park can’t be easy. You don’t want 10 soundalike clones of the headliner. But you also don’t want anything too out there either. It’s a balancing act that, on paper, Duran Duran have got all wrong. Sure, Nile Rodgers, who helped revitalise their career in the mid-’80s, makes sense. But what about a soul singer with roots in jazz, gospel, and classical? Or a Norwegian artist always described as “ethereal” and “Enya-like” by lazy writers? Or, least of all, a sweary post-punk band with song titles like Lady Eggs and Greasin’ Up For Jesus? It’s not exactly what you’d expect in the same postal code as Ordinary World.

And yet, in Hyde Park on a sweltering Sunday, they all make sense. Laura Mvula, who occupies but a fraction of the main Great Oak Stage’s acreage with her guitarist and bass player, has transformed into an ’80s electropop goddess. The opening trio of Safe Passage, Church Girl, and Conditional, all from last year’s Pink Noise, may be stuffed with the slap bass, shimmering guitars, and synth-beats, -handclaps, and -brass of 40 years ago. Yet the songs themselves — simultaneously catchy and complex — are anything but clichéd. And they’re delivered with a soaring voice that quite easily fills the rest of the stage, while helping to carry the retrofuturistic makeovers of her earlier work. Tracks like the orchestral Sing To The Moon; her only charting single, Green Garden (“It got to 32,” she deadpans); and especially the choral Show Me Love sound just as powerful without the lavish arrangements of the studio recordings. She even successfully tackles I Would Die 4 U after explaining, with more than a hint of lingering disbelief, that Prince was a mentor. Trapped behind a Prophet 6 analogue synthesiser and with the most basic of backdrops — her name in white on black — Mvula still manages to win over a curious audience with just her music, vocals, and charming sincerity.

Aurora, by contrast, is a dervish, rarely standing still as she acts out her songs through theatrical gestures, interpretive dance-adjacent moves, and exaggerated facial expressions. That’s despite the searing heat — and a flowing dress that “keeps going into my butt” she explains with an unfiltered honesty that permeates her entire, largely exuberant, set. Although the unselfconsciously free performance plays a part, the frolicking, curtseying, and marching on the spot would amount to nothing without the equally dramatic, equally playful songs. Rooted in Norway’s folk tradition, they’re the sort of adventurous electroorganic pop Duran Duran have always pursued. Performed with a drummer, keyboard player, guitarist, and backing singer, each tends to embrace restraint and excess with equal enthusiasm. Quiet, acoustic verses, paired with Aurora’s ethereal, Enya-like delivery, typically build up to choruses big on pounding rhythms and stratospheric vocals (see, for example, Heathens, Churchyard, or Running With The Wolves). A Dangerous Thing, which promises “there’s no love in the end”, adds a serious hit of melancholy to the mix, while the empowering Cure For Me rails against conversion therapy in a banging pop tune.

Over on the Rainbow Stage, Warmduscher aren’t quite as subtle. Dressed in white boiler suits, with in-your-face singer Clams Baker Jr in a matching tracksuit, they come out to cheesy flute music, ceremonially open their beers, and leap into a musically eclectic set that has its wild, wicked way with krautrock, sleazy disco, synth-led swing, frisky psychedelia, punk, funk, R&B, hip-hop, and the closest Hyde Park’s ever come to thrash metal. Such genre fluidity should leave you with whiplash. But there’s a confidence, and an infectious sense of fun, holding it all together. A lot of that’s down to Baker. Not just the vocalist, whose delivery ranges from deadpan to the occasional falsetto, he really sells these songs. Not everyone can pull off a line like “Take a picture, baby, I see you looking” (Five Star Rated) or lay into deadlines, rules, regulations, smartphones, “the kids on the sidewalk that laugh at me when I fall over”, or the “little stupid dog with the furry colour” with ever increasing frustration, and leave you smiling (Wild Flowers). He and the rest of the band really outdo themselves, though, on the electro-glitch stomp Twitchin’ In The Kitchen and post-punk maelstrom Eight Minute Machine (both set highlights, both from recent album At The Hotspot).

Baker eventually invites Nile Rodgers over to their trailer to keep the party going, but the 69-year-old Chic star turns out to be otherwise occupied on the main stage: looking stylish in a pink suit and white signature Kangol hat, playing iconic funk guitar licks, sharing the stories behind his greatest hits, leading his eight-piece band through some of the most ubiquitous tracks of the past 50 years, or prompting the audience to become his collaborators (i.e., sing along). They don’t need much convincing, to be fair, especially since Rodgers specialises in the kind of song that needs just 30 seconds to be trapped in your brain forever. After all, outside platinum-plated Chic standards like Dance, Dance, Dance (Yowsah, Yowsah, Yowsah), Everybody Dance, and Le Freak, he played a major part in stone-cold classics including Madonna’s Material Girl, David Bowie’s Let’s Dance, Diana Ross’ Upside Down, and Daft Punk’s Get Lucky. All get an outing today, with the band as the jukebox, the sun as the mirrorball, and singers Kimberly Davis and Audrey Martells as the stars. Although everyone on stage, from the horn section to the singing drummer, is clearly supremely talented, it’s the lead vocalists who shine brightest. Songs like Sister Sledge’s We Are Family, Madge’s Like A Virgin, and Chic’s own I Want Your Love especially benefit from their huge, soulful voices that are so powerful they almost manage to drown out the all-singing, all-dancing audience.

If anything, that singing and dancing intensifies exponentially within seconds of Duran Duran strolling out, waving, smiling, and beginning The Wild Boys. As flames light up the screen behind them, Simon Le Bon (silver trousers, pink jacket), John Taylor (black trousers, red jacket), and touring guitarist Dom Brown (hot pink trousers, hot pink jacket, rolled-up sleeves) strut down the runway. The frontman shares his microphone with the bass player to sing the chorus already being chanted by the masses. Across Hyde Park, arms are raised in unison as if carefully choreographed. Dad (and mom) dancing ensues. “London, how are you doing? We’re Duran Duran,” a beaming Le Bon announces to whoops, whistles, and cheers.

And so it goes, mostly, for the next two hours. Supported by two superb backing vocalists and an eager sax player, the band confidently stride through a set packed with the hits you’d expect, a few surprises, a handful of new tunes, and an on-form Le Bon going full blown showman: the raised handclaps, the spontaneous dancing, the high kicks, the asides like: “My name’s Bon. Simon Le Bon. It’s French, you know.” It’s all supported by visuals as eye-popping as Nick Rhodes’ lime green suit, including a dancing android, doves flying in slow motion, a cityscape by night, clips from classic horror films, band videos from 40 years ago, and (probably most on-brand) a Lotus Esprit driving towards the sunset rendered in ’80s dayglo animation.

The overall effect is a carefree, party atmosphere, as immersive as the songs sound effortless. Introduced with a wry “are you ready to Bond?”, the thrilling A View To A Kill is still all about Roger Taylor’s drumming, that unmistakable jangling guitar riff, and machismo. A joyful Notorious makes the most of Nile Rodgers as well as singers Rachael O’Connor and Anna Ross. Come Undone gets a sensual makeover. Ordinary World, dedicated to the people of Ukraine, sounds positively regal. Hungry Like The Wolf excites, and is another opportunity for John Taylor to play his bass like lead guitar (while sparking unsolicited “do do do” audience participation). Planet Earth is still as bouncy as it was 40 years ago, The Reflex still as nimble. Girls On Film, recognised en masse by the intro camera sound effects, is an all-out parade complete with instrumental breakdowns and an inspired detour into Calvin Harris’ Acceptable In The ’80s. And Invisible, the lead single from recent #3 UK album, Future Past, easily holds its own alongside those songs that have clearly soundtracked the lives of so many people here.

Although played as skilfully as the big hits, other new tracks (like the effervescent Tonight United) and relative obscurities (like the debut album’s Friends Of Mine) aren’t greeted quite as feverishly. The only misstep, though, is their rendition of Melle Mel’s hip-hop classic White Lines (Don’t Do It), but plain sailing soon resumes. By the time they reach the encore, Duran Duran can do no wrong. “You know the words. If you don’t, you’re standing next to someone who does,” is how Le Bon introduces Save A Prayer, as Hyde Park is lit up by what must be over 60,000 mobile phones. The audience sound ecstatic, but more’s still to come. They erupt as the singer teases: “There’s only one thing it could be now.” Of course, that’s Rio. A carnival within a pop song — sax solo and all — it’s the perfect end to one of the hottest, most glorious days of the year.