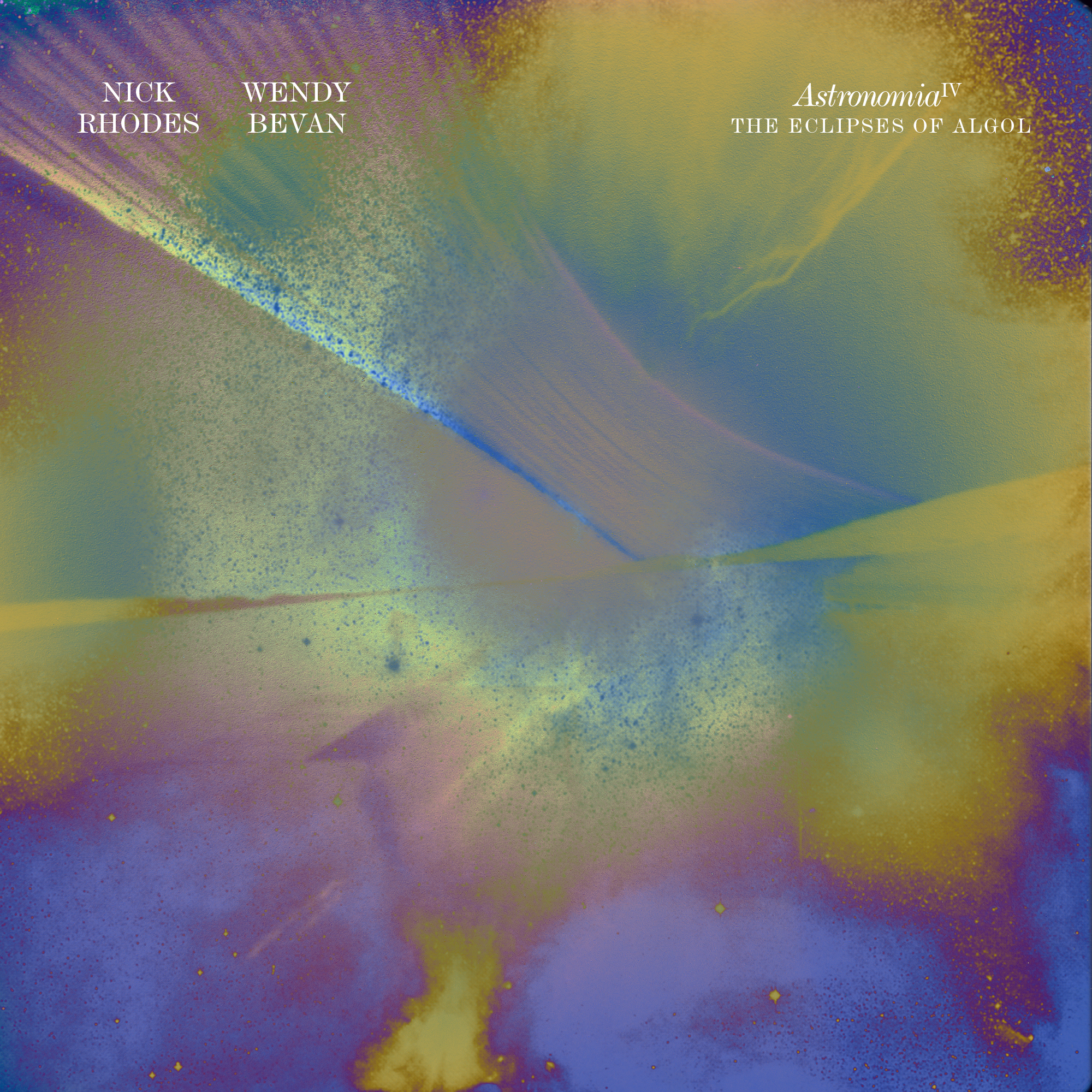 Duran Duran co-founder and keyboardist, Nick Rhodes and British artist and singer/violinist Wendy Bevan are set to release the final installment of their four-part ASTRONOMIA project ‘ASTRONOMIA IV: THE ECLIPSES OF ALGOL’ via Tape Modern on December 21, 2022 (the eve of the Winter solstice).

Over the course of 2020, the duo collaborated on a monumental project, which is almost certainly the most ambitious musical venture undertaken during the pandemic: a series of 52 cinematic instrumentals inspired by the Universe. These works have been presented across four 13-track, individually named albums, as the Astronomia project. The first release ‘The Fall of Saturn’ debuted on the Spring Equinox (March 20), the second: “The Rise Of Lyra’ on the Summer Solstice (June 21), and the third release: ‘’Heaven and Hell in the Serpent’s Tail’ on the Autumn Equinox (September 22). The final installment, ‘The Eclipses of Algol’ will be released on the Winter Solstice (December 21).

Read the FORBES interview with Nick and Wendy here.

Rhodes and Bevan first started working together during 2018, instantly conceiving an exquisite, and very visual musical language. Initially the idea was to create a solo project for Bevan, which Rhodes would co-write and produce. However, as the global pandemic took hold, they became geographically separated by the oceans, Wendy in Los Angeles and Nick in London, and their work together took on a different tone as a direct response to the sadness and turbulence of the situation, as revealed to Variety.

About the project the pair said,

The Astronomia project was accidental and circumstantial, an ironic and humble parallel to the possible way the Universe itself was formed.

We had no plan and no clue where our experiments would lead us, but they did unfold and expand rapidly in ways we could never have predicted. Sometimes in life if you follow your instincts, they can lead you to special places you may have otherwise never discovered. This journey was entirely unexpected and ended up becoming thrilling for both Wendy and me.

Whilst we realised it was an enormously ambitious project to embark upon during such uncertain times, it gave us some focus and enabled us to find our way through the darkness by expressing ourselves musically. As there are 52 tracks in total, it really became our weekly diary for the year.

We chose the Universe as our main source of inspiration, knowing there is no greater subject matter. Somehow, given the experiences we were all going through, it seemed more profound than ever before in our lifetimes to gaze up at the stars in awe and consider the infinite possibilities of life outside our planet.

We also explored ancient mythology for which we both shared a fascination - the themes and characters are deeply intwined in our culture even for those who may not realise it. Revisiting these extraordinarily imaginative stories proved to be a great inspiration.

The sound of the project changes from album to album but certain threads remain constant throughout. The atmosphere is ethereal, other-worldly and unexpected.

The Eclipses of Algol is the most lush and orchestral of the four albums in the series. The dynamic and mood felt like the perfect conclusion to the Astronomia journey.

In a strange way, subliminally, the four albums each seem to represent a different phase of the pandemic. Even without words, the creation of Astronomia was guided by our experiences and the music told a story of the turmoil we all faced. The project became an allegory for these times. The first record explored the realisation something deeply unsettling was starting to happen. The second echoed the ensuing chaos and spiral out of control. The third mirrored the heat of the battle to reinstate some equilibrium. The fourth expresses a world beginning to re-emerge with hope for the future.

The Eclipses of Algol has more orchestral pieces than the previous three records, with a greater range of dynamics, theatricality and a sense of grandeur. It is the conclusion to the Astronomia journey so far, representing the final stages of the experiences we have been living through during the last 18 months.

Although I’m fond of so many of the tracks, one of my favourites on The Eclipses of Algol is Blazhko Effect, because it demands the listener’s attention early in the album and is an incredibly striking start to the grand finale. Beyond The Wall of Sleep and Rainfall of Diamonds are also amongst some of my favourites from the entire body of work.

We are communicating many of the emotions we feel in these tempestuous times without words; Astronomia is a pure representation of this in musical form.

Transcending is the first track on the new album. It intentionally guides the listener into the fourth part of the Astronomia series with its other-worldly vocal melody.

Astronomia is an experimental project that explores expression through a rich tapestry of soundscapes, conjuring a thematic visual narrative through its concept and unique sound.

In astronomy Algol is also referred to as the Demon Star because it is thought to represent the head of Medusa. Nick and I love the theatricality of the character of Medusa and thought she needed representation in the Astronomia project.

Prior to Astronomia, I started to compose for spaces, working on how sound can sculpt and hold space. My compositions combine elements of ambient, choral, sacred, and noise; influenced by minimalism, drone, field recordings and electro-acoustic experiments on the violin and voice.

Drawing upon a sense of light, something sacred and other-worldly, Astronomia explores tension in texture, tonality and timing. Through our sonic tapestries we explore limitless dimensions and transitions in the universe.

Beyond The Wall of Sleep is named after a short story by HP Lovecraft, written in 1919. Algol is the location of the final battle between the "light being" and its interstellar nemesis, a vague "cosmic oppressor”. The battle is marked by the appearance of a nova in the night sky near Algol.

With a shared love of film, photography and style, Bevan and Rhodes have accompanied each track on the Astronomia volumes with a carefully curated visual, available via their Instagram @astronomiavolumes.

1.Transcending
2. Blazhko Effect
3. Spectre’s Head
4. The Sorrows Of Medusa
5. Double Drift Theory
6. Rainfall of Diamonds
7. Fifth Star Of The Mausoleum
8. Xi Persei
9. Banquets Of The Black Widows
10. Beyond The Wall Of Sleep
11. Cassiopeia
12. The Algol Paradox
13. Occulted By The Moon