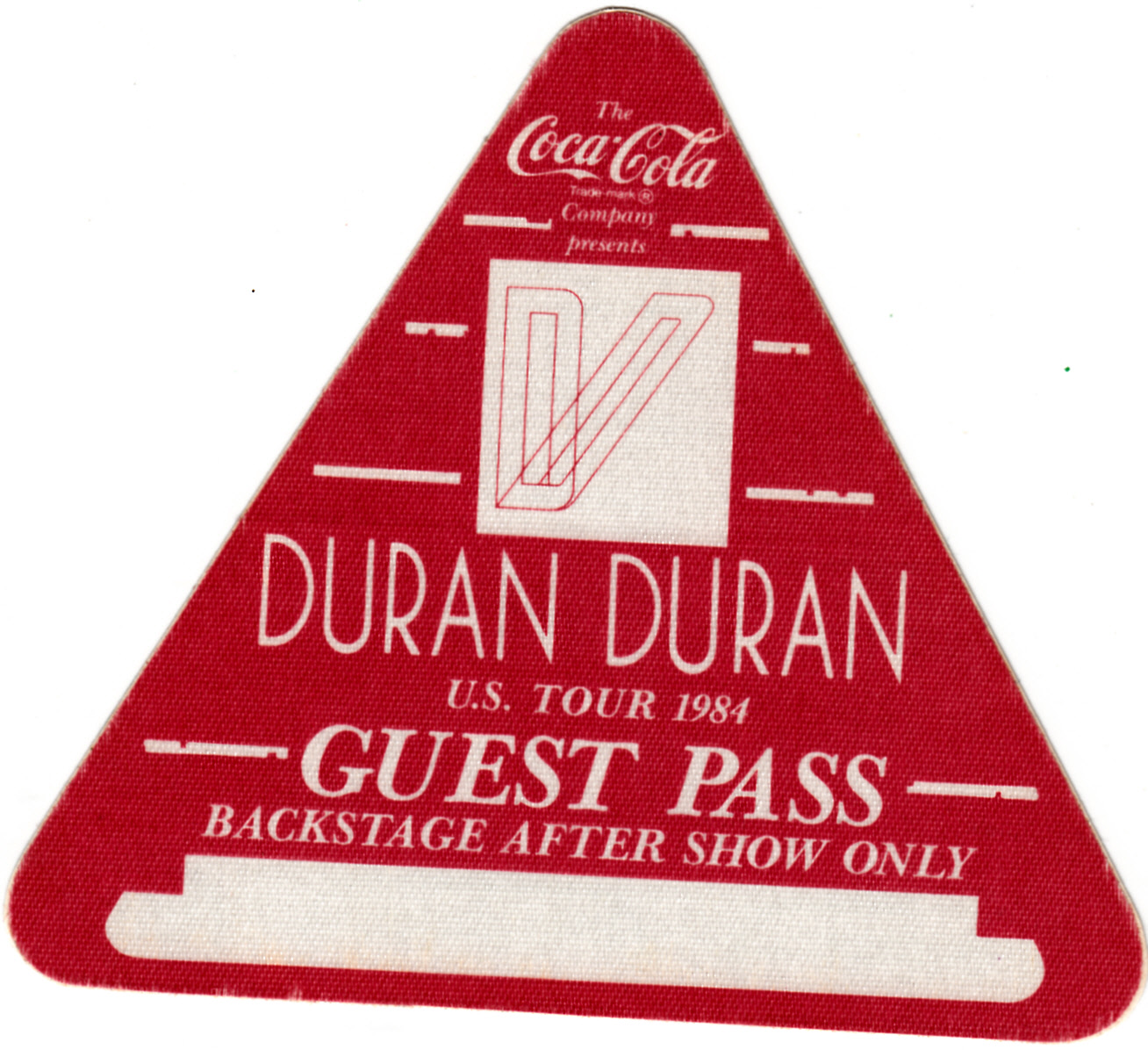 As we await the return of Duran Duran to live stages around the globe, this month we are going to revisit an assortment of tickets, set lists and passes. The keen among you will recall our first foray into this topic was way back in August 2014! (forgive some broken imaging)

Let’s start out with this ticket stub from THE TONIGHT SHOW with Jay Leno, in Burbank, California from October 9, 1997.

Here are two press passes from Paris, circa 1987 and 1988. Both of these shows were played at the Palais Omnisport de Paris-Bercy, which is located in the 12th Arrondissement on the right bank of the Seine. The 1987 show was on April 3, and the 1988 gig was November 21.

The world has many fantastic outdoor venues to enjoy. If you only had to choose one to see a show, it might just have to be Red Rocks in Colorado. Here’s a setlist from when the Durans played there on September 20, 2015.

Here’s a ticket from a show on July 6, 1982 in Toronto at The Concert Hall. It’s interesting to note that the Concert Hall is a small venue that holds about 1200 people, and that when Duran came back to Toronto just over one month later to support Blondie, they play for nearly 50,000 people, the largest crowd the band had played for up to that point!

Take a look at this photo pass from the one-off gig by The Devils in Cologne, Germany on February 17, 2003. The Devils was a side project Nick had with Stephen Duffy, who was the very first singer in the very first version of Duran Duran. Duffy had found a cassette of the first ever Duran gig from April 1979, and then serendipitously run into Nick in London not long after. The two old friends decided to make a new record based on old demos Duran had made in 1978-79 and DARK CIRCLES was the result, released in July 2002. Nick and Stephen agreed to do two gigs to promote the project. One was the more simple act of miming in a shop window. The second was this show, which was filmed to be aired on the MUSIC PLANET 2NITE television show on Arte TV in Germany. If you dig around online, you can find an archival copy to enjoy.

Here’s a ticket from a concert in Adelaide, Australia on April 1, 2008. This gig, which took place at the Adelaide Entertainment Centre, was part of the Red Carpet Massacre tour.

Here’s a guest pass from the 1984 Sing Blue Silver tour of North America (note the coca-cola logo on the top!). This leg of the tour ran from January to April and covered an immense amount of geography through Canada and the United States.

Next up is a setlist from an interesting one-off gig the band did. The DELL WORLD convention was in Austin, TX and Duran Duran was the special musical guest which a shorter than usual performance in November, 2014.

Here’s a ticket stub from a Duran Duran concert at the world famous Madison Square Garden in New York city. Like Red Rocks, this is totally an iconic venue to see a show. If you’ve never had the pleasure of seeing MSG in real life, spoiler alert...it’s round!

Finally, we’ll take a page from 2014 and end with some guitar picks, or plectrums if you prefer! Here are 2 guitar picks taken from gigs in Niagara Falls, Canada. JT’s pick comes from the show that was on March 25, 2015 and Simon’s was from the night after, March 26, 2015. As always, we want to see your collection on our socials!

Prev
Collector’s Corner 100!
Next
COLLECTOR’S CORNER: JULY, 2021
Collector's Corner
Back to all posts