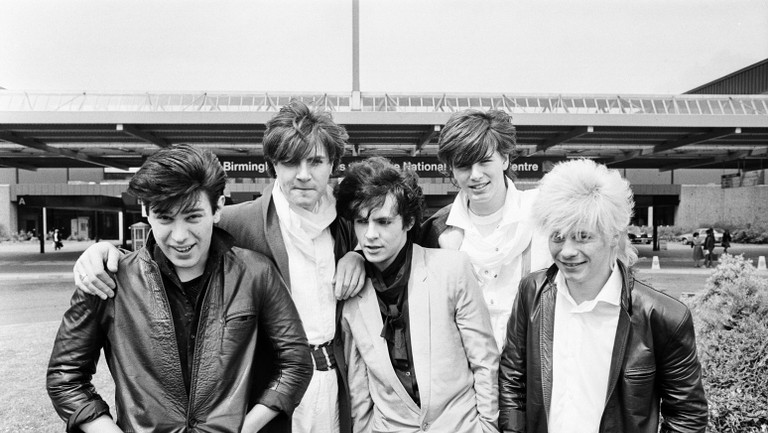 For the week ending August 20, 1983, Duran Duran's self-titled debut album ascended to its peak position of No. 10 on the Billboard 200 albums chart (then known as the Top LPs & Tape chart). Today, that fact wouldn't be out of the ordinary: The Birmingham, England-formed rock band have had six LPs land in the U.S. top 10, including their last album, 2015's Paper Gods, which also reached No. 10.

However, back in 1983, Duran Duran's success was particularly hard-fought. The full-length had debuted on the chart at No. 179 six months before, in the issue dated February 19 -- nearly two years after the LP's initial release date of June 15, 1981.

The album was an immediate hit in the U.K., debuting at No. 9 and peaking at No. 3, while the LP's iconic first single, "Planet Earth," was a major hit both in England and Australia. It's difficult to imagine now, what with the perma-cool stature of Duran Duran and the enduring resonance of "Planet Earth" and the album's other major hit, "Girls on Film," but American audiences took a while to warm up to the band and LP. In fact, Duran Duran's debut took a very unusual path to commercial success: It became a breakout hit in the U.S. only after the band's second album, 1982's Rio, was already a smash -- and after it was reissued with the addition of a stellar new single, "Is There Something I Should Know?"

Still, in advance of their debut's original U.S. release, Duran Duran started making waves in a place where they felt right at home: the dancefloor. For the week ending April 4, 1981, the import of "Planet Earth" debuted at No. 88 on Billboard's Dance Club Songs chart, then titled the Disco Top 100. By the week of May 23, the song was up to No. 26 -- and a month later, in the issue dated June 20, the song received a positive review in Billboard's Top Single Picks section: "Armed with an irresistible rhythm and a chokehold of a hook, this dance rock song could do well with top 40 and AOR audiences."

That same week, Duran Duran's "Careless Memories" debuted on the Disco Top 100 chart at No. 86, and a full-page ad touting the group's "adventurous" new album ran in Billboard, with the tagline, "Dance into the future with Duran Duran." Above a photo of Earth from space, the ad called out the new band's strengths ("the elemental energy of polyrhythmic funk," "the intellectual stimulation of challenging lyrics") and described the group in a way that's not quite as positive as likely intended ("the flamboyant showmanship of the new narcissists").

A week later, Duran Duran's debut LP also received an encouraging Billboard write-up, reviewed alongside such disparate fare as Joy Division's posthumous post-punk masterpiece Closer and The Great Muppet Caper soundtrack. "Dance rhythms propel this first offering from one of Britain's latest offerings. The rock disco mix is full of explosive hooks and the full production only complements the sound." After praising the "insistent rhythm" of "Planet Earth," the review concluded, "Pitch to fans of Spandau Ballet and similar acts in that genre."

The propulsive "Planet Earth" did indeed linger on the dance charts throughout the summer, and took on new life once it was paired with "Girls on Film" on the Disco Top 80 starting with the week ending September 19. In fact, this pair of songs ended up at No. 30 in Billboard's year-end 1981 list in the disco category, sandwiched between the Whispers' "It's a Love Thing" and Prince's "Uptown."

But "Girls on Film" also received a boost from an infamous, Godley and Crème-directed video, which was quite popular in dance clubs. Forty years ago, these clubs were crucial places for newer acts, as while MTV had launched in September of 1981, its reach was still relatively small: According to Billboard's 1986 retrospective of the channel's first five years, MTV was only in 3 million U.S. homes in December of that year.

While the cinematic, Rio-era music videos propelled Duran Duran's success in 1982 and into 1983, the band wasn't yet in heavy rotation on MTV during the channel's earliest days. Still, Duran Duran were already making waves for their visuals in 1981. In an October 17 Music Monitor column, Billboardeven dubbed the "Girls on Film" clip as "perhaps the most controversial rock promo video of 1981," owing to its risqué, sexually suggestive scenes and scantily clad women. However, more crucially, that column also gave the members of Duran Duran a chance to state their case for the video.

"I don't look on it as a pornographic film or a dirty movie," frontman Simon Le Bon said. "It says a lot of things visually, which are in the song. It's not for dirty old men in movie theatres. It's for girls as well as fellas." He later added: "A lot of people are going to slag us off. A lot of people will try to get us banned from this place or that. I'm dying for that. When they try to ban us, that means we're making an impression on people."

Keyboardist Nick Rhodes, meanwhile, pointed out the pragmatic case for the video medium, noting Duran Duran topped the charts in Australia thanks to the "Planet Earth" video ("We couldn't have gotten any TV there otherwise. We couldn't afford the time or the money to go there for one TV show") and could earn new fans thanks to the visual. "The 'Girls On Film' video has been shown in clubs and it's helping a lot. Kids will see the video and say, 'The song's good, the video's great. Let's go check the band out.'"

"Girls on Film" did land with audiences outside of clubs, although it took a while. In fact, the song re-emerged once again in spring 1983. Duran Duran performed a spirited version of the tune during a mid-March appearance on Saturday Night Live, and "Girls on Film" subsequently debuted on the April 9 rock radio charts at No. 30, alongside two songs from the still-hot Rio: the title track -- which was also racing up the Billboard Hot 100 at the time -- and "Hungry Like the Wolf," which was then sitting at No. 3 on the chart. MTV also put the "Girls on Film" video in rotation—and in a testament to how much the channel steered culture, Billboard reported the clip was listed in medium rotation in mid-April alongside the video for Rio's "Save a Prayer," which wasn't even a single in the U.S. until 1985.

Unsurprisingly, all of this activity coincided with Rio's peak Billboard chart performance: The LP spent seven consecutive weeks at No. 6 on the Top LPs & Tape chart in March and April, and 11 weeks overall in the top 10. On April 30, the Duran Duran LP also debuted on what was then known as the Rock Albums chart at No. 34, two spots below Rio.

However, the Duran Duran LP was about to finally eclipse Rio and grab the spotlight in America. In mid-May, yet another Duran Duran release appeared on the Rock Albums chart: the 12-inch for "Is There Something I Should Know?" the Beatles-esque song that debuted straight at No. 1 in the U.K. as a stand-alone single earlier in the year. The single was also a success in America, eventually peaking at No. 4 in early August. A shorter version of "Is There Something I Should Know?" was appended to a new U.S. version of the Duran Duran LP, which boasted an updated, more sophisticated band photo on the cover that represented the band's post-success polish. This reissue did the trick: As "Is There Something I Should Know?" burned up the pop charts, the Duran Duran LP gained parallel momentum and reached the top 10. The LP ended up spending 87 weeks on the Billboard Top 200, taking it well into 1984.

Incredibly enough, the same week this debut reached the top 10, Rio remained on the Top LPs & Tape chart at No. 99. And, in a further testament to Duran Duran's ubiquity, by the end of 1983, both of these albums were joined on the album chart by a third Duran Duran studio full-length: Seven & The Ragged Tiger. When all was said and done, Rio placed No. 13 on Billboard's 1983 Top Pop Albums list, and Duran Duran landed at No. 26 -- while Duran Duran themselves were the overall No. 4 pop artist for the year.

t's safe to say that Duran Duran's 1983 cemented their status as one of the world's biggest rock bands. When I interviewed drummer Roger Taylor in recent years and asked what it was like experiencing massive popularity and cultural ubiquity during this era, he said it could be "pretty overwhelming," but added:

"At the time, though, it felt quite natural, and it was something we all aspired to. We all wanted to be in a big band, and especially in those days, it came with the territory. We knew that had happened to the Beatles. We knew it happened to Bowie. So although it was kind of difficult to deal with—and it came very, very quickly—none of us wanted to really change it."

Annie Zaleski is the author of the 33 ⅓ book series installment on Duran Duran’s Rio (Bloomsbury Academic), available in stores and via all major online retailers now.