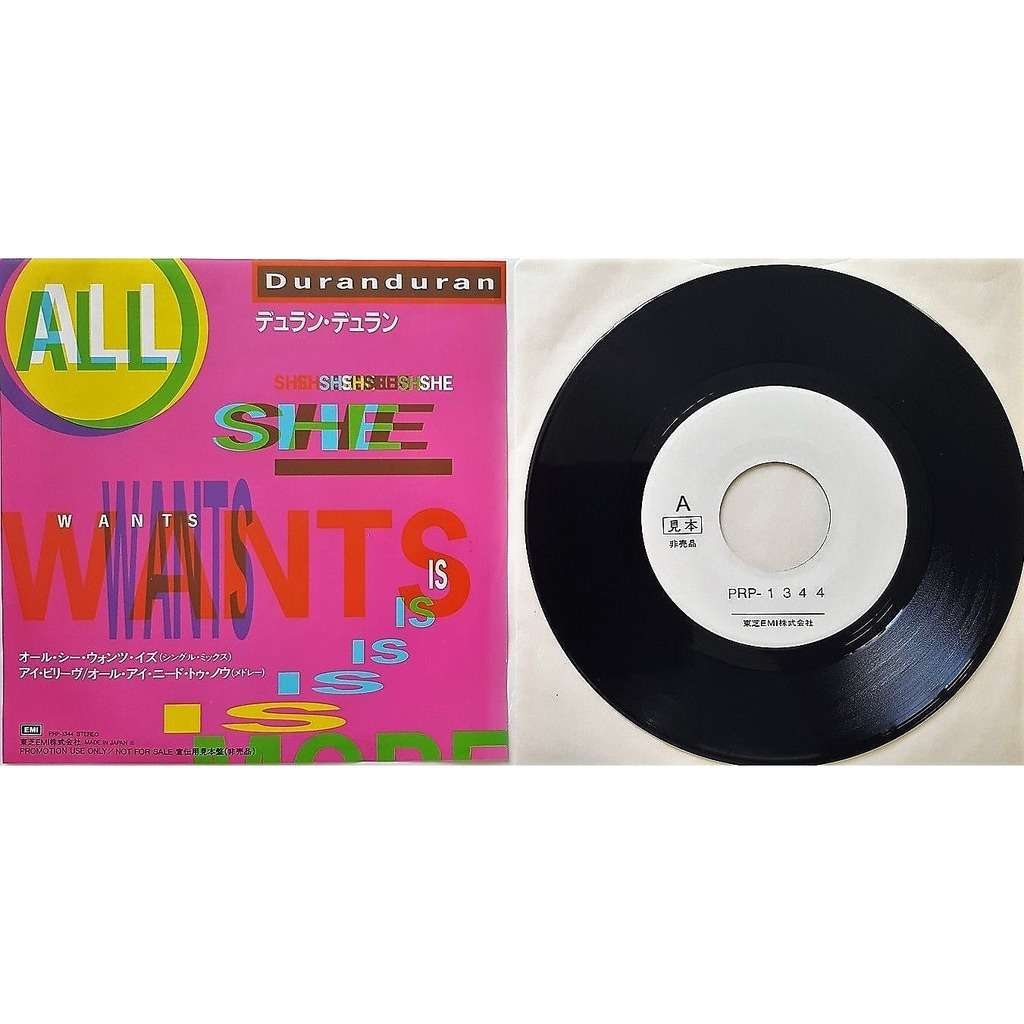 It was just before Christmas 1988 when EMI launched the second single from the Big Thing album, “All She Wants Is.”

Housed in the distinctive modern sleeve designed by Hans Arnold, with a Dean Chamberlain picture on the back, the song was a success on the dance charts all over the world, and became another UK top 10 hit for Duran Duran.

The regular single was released in the UK as a 7” in either poster sleeve or card sleeve, and as a 3” CD single. All versions were backed with the song “I Believe/All I Need To Know,” which has become a fan favorite.

[Side note - it was a nice surprise for fans to find that the full 6.14 minute version of “I Believe/All I Need To Know” was included on the 2010 reissue of Big Thing.]

In the US, Capitol released a 7” in a paper sleeve and a CD single in the now highly collectible longbox. Both formats contain the same tracks as the UK equivalents.

In fact, the single was released in many physical formats, no less than four different CD-singles, at least five different 12” singles and, of course, a handful of different 7” singles.

This served as a boon for collectors, as several different remixes were commissioned for “All She Wants Is," which were then spread across the 12” releases.

On some of the releases, two standard 12”s were pressed: the Euro House Mixes and the US Mastermixes. Both were released in a sleeve but with different designs, and both contained two different remixes plus the b-side “I Believe/All I Need To Know.”

A third 12” exists, manufactured in Holland for distribution in Germany, featuring the House Dub Remixes but without the b-side “I Believe/All I Need To Know.” A similar CD single version was also pressed in Germany with the same track-listing; this one is quite scarce, and used to sell for fairly high prices.

The promo releases for “All She Wants Is” range from a single track CD single from the United States to UK and US 12”s loaded with remixes. However, the most scarce promotional release is either the Japanese promo 12” with“All She Wants Is” on side A backed with the album version of “I Don’t Want Your Love,” or the Mexican 7” promo pressing. This particular 7” has “All She Wants Is” on side A and the title track of the album, “Big Thing,” on the B side. If you happen to have this one in your collection, then treasure it and handle it with a lot of love and care as it is very rare indeed!