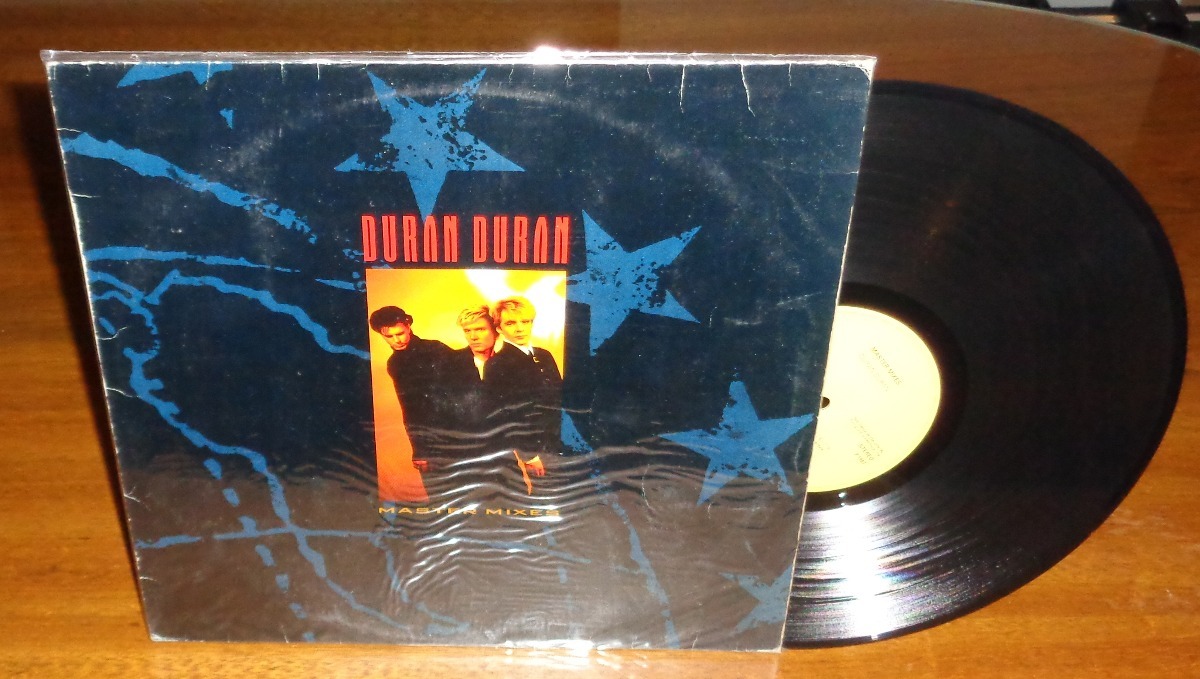 Brazil is a country that has always showed a lot of love for Duran Duran.

However, it was only in January, 1988 that the band first went to Brazil to play two of their biggest show at stadiums in Rio de Janeiro and Sao Paulo. Duran headlined the first Hollywood Rock Festival in Brazil, and, in fact, the footage from this show was used in the live concert video/DVD “Working For The Skin Trade .”

To commemorate these 1988 shows, a special edition vinyl called ‘Master Mixes’ was issued in Brazil with a uniquely designed sleeve that showcased recent photos (at the time) promoting the two dates on the back of the album.

This release has a slightly different track-listing than the US or Asian pressing of the ‘Master Mixes.’ The Latin Rascal Mix of “Notorious” was included, as well as an extended remix of “Meet El Presidente” whereas the other territories’ release have extra mixes of “American Science” and “Vertigo.”

Additionally, prior to the two 1988 live shows, Harvest/EMI Odeon issued a radio promo single to get audiences excited for the upcoming performances. The label chose “A Matter Of Feeling,” and they managed to get the track featured on the soundtrack of a very popular telenova, “Mandala,” as well.

Funny enough, in Brazil, “A Matter Of Feeling” is included on “Decade” in favour of “All She Wants Is,” which was on all other international releases.

More on Brazil - rewind back to 1981: EMI Odeon decided to release a promotional 7” single with Duran Duran’s “Anyone Out There” on side A and “Planet Earth” on side B. This came out with two different sleeves: one is in a very colourful EMI Odeon company sleeve and the other in the infamous black ‘Nexus’ sleeve with a band picture. (Nexus was a popular jeans brand at the time.) Not surprisingly, this release is very collectable.

From 1982 until 1985, many of the singles by Duran Duran were relesaed in Brazil in the 7” format. Almost all came out in sturdy carton sleeves with the same artwork as what was being released in the UK. In 1983, the record company in Brazil put out another promo 7”, but this featured 2-minute clips of all of the singles taken from the RIO album: “Rio,” “Save A Prayer,’’ “Hungry Like the Wolf” and “My Own Way.” This single came in a beautifully designed sleeve based on the RIO album, and is another brilliant looking collectable item!

True Duran collectors know that among the Brazilian vinyl releases, only a few 12”s exist. One very special issue, released only in Brazil, was “Too Late Marlene” from the album “Big Thing.” The 12” has the album version on both sides, but one plays at 45rpm and the other at 33rpm. It is in a red die-cut sleeve with a unique “hype” sticker. Not many of these were made, so if you have one, keep it safe!

Another collectible is the single sided flexi disc with a live version of “Too Late Marlene” which was included with Bizz magazine in 1989. This version was recorded at Duran Duran’s Big Live Thing concert in London on December 23rd, 1988.

To get a taste of what that Brazilian audience was like seeing Duran Duran for the first time, pull out your copy of “Working For The Skin Trade”and enjoy the carnival!