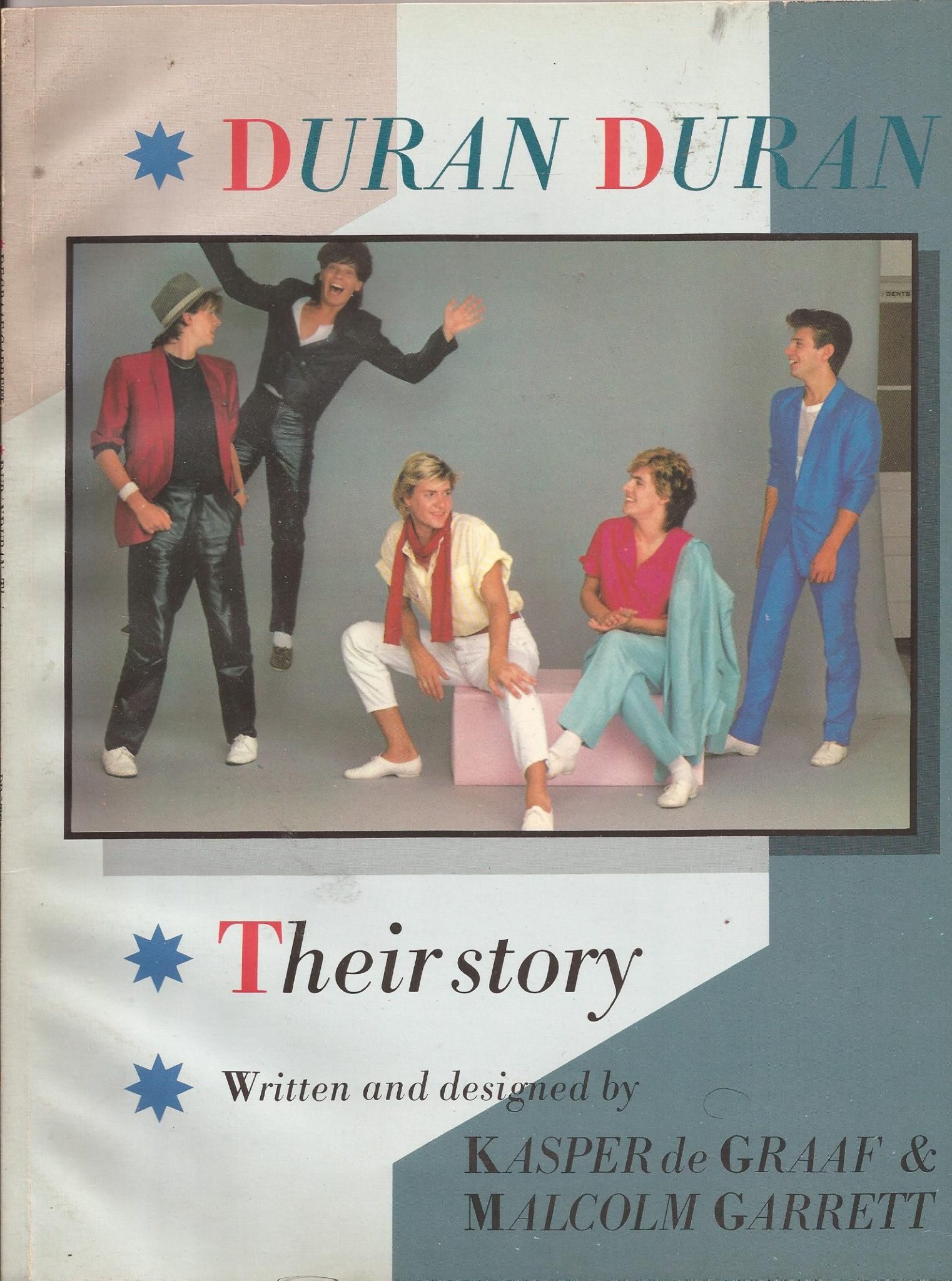 THROW THE BOOK AT THEM!

Nowadays, we take our online lives for granted, but not long ago the internet was the realm of scientists and engineers, something most citizens didn't even know existed, and the printed word was usually found in a book. Yes, the 1980s, when words were still being delivered the old fashioned way, meaning there are lots of wonderful books about Duran Duran to collect.

The first official Duran Duran book on the market was the pointedly named Official Lyric Book, released in late 1982. A collection of the band's lyrics up to that point, it also came with a pull out poster. Within the year, the band had grown in popularity and the selection of books, both official and not so much, grew with them.

Fan frenzy for the band struck the UK hard in '82, the perfect time for their first official biography book, DURAN DURAN * Their story, written by Kasper de Graaf and designed by old pal Malcolm Garrett, who had done most of the band's design work up until that point.

By 1984, Duran Duran had become a worldwide sensation and the demand for information about them was high. While there were the few officially released books, they were soon joined by countless others, many of which were not official, written by people who had nothing to do with the band. Of these spurious bio books from 1984, one deserves special mention: Duran Duran : The First Four Years of the Fab Five seemed like another cookie cutter bio when it arrived on the scene. However, the book was one of the more well written and informative offerings, penned by a young author who would turn out to be a writer of some note - this was Neil Gaiman's first ever proper writing job, and he has since become recognized as one of the most outstanding literary voices of his generation, producing amazing works to this day.

In March 1985, THE BOOK OF WORDS was released. Where the first lyric book was sparse on information, THE BOOK OF WORDS was a beautiful presentation, again handled by Malcolm Garrett & Kasper de Graaf. The book showed off Simon's skill as a lyricist, and gave a glimpse into his writing history, with some of his most insightful thoughts on his own work. It is interesting to note that in the first edition of THE BOOK OF WORDS , the discography lists the forthcoming release as being named BURNING BRIGHT, updated to ARENA and including the cover image in later editions.

The next official book was SING BLUE SILVER, a photo book documenting the 1984 tour, in which Denis O'Regan captured some of Duran Duran's most iconic images. In Japan, the cover was different as well as some of the contents, surely worth tracking down a copy!

Paul Edmond was fortunate to have had incredible access to Duran Duran between 1979 and 1982, and his collection of photos DURAN DURAN : UNSEEN is a great collectible released in 2005. This book also featured the work of de Graaf & Garrett, and is a remarkable portrait of not only the band's earliest years, but of Birmingham's vivid post-punk scene. Sadly, Paul passed away in November, 2015. He will be remembered fondly by the band and fans alike for his amazing body of work and his joie de vivre.

In total, there have been more than 100 books produced about Duran Duran. Sometime down the road, we'll head back to the library and pick up where we left off. You didn't think we were going to leave out the WORLD book, did you?!