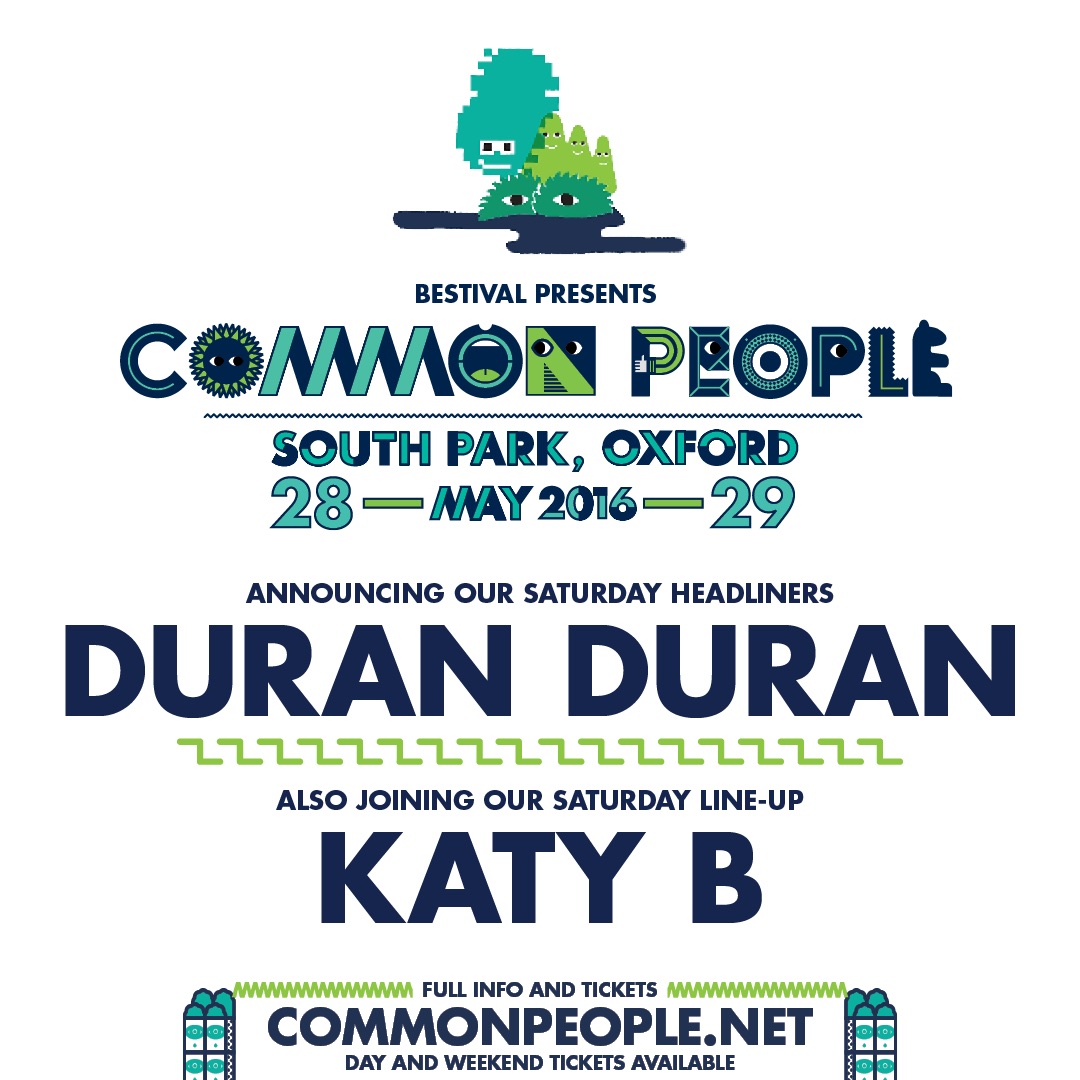 Set to take our two-day metropolitan jamboree by storm, the Common People crew are delighted to announce that Duran Duran will headline Common People 2016, topping the bill at Oxford’s South Park on Saturday 28th May and then providing a fitting finale for our Southampton Common shindig on Sunday 29th May.

Common People head honcho Rob da Bank says: “So, we were already off to a flyer with Common People selling out last year, announcing a second site this year, with our beautiful South Park location in Oxford, overlooking the dreaming spires, and now we’re putting the cherry on top with the news that Duran Duran will be headlining a day in each city! Icons of the last four decades the boys are still churning out hits and absolutely smashed it at our mothership show Bestival last year. I’m also delighted to announce Katy B will be joining the party. See you in the fields”.

Commenting on their headline performance, Duran Duran’s John Taylor said: “We are very honoured to be a part of this year’s Common People festival, we had such an incredible time at Bestival last year. It’s going to be a fantastic weekend! See you all there”.

A universal highlight of Bestival’s Summer of Love, Duran Duran took it to the next level on the Isle of Wight last year, so team CP just couldn’t resist bringing them to South Park to headline the first day of Oxford’s inaugural Common People and to wrap up our sophomore Southampton outing. One of UK pop music’s most successful and enduring bands, Duran Duran have provided the soundtrack to the lives several generations, from their early days in Birmingham’s Rum Runner formulating the sound that would give us "Planet Earth" and "Girls on Film" to their latest acclaimed album, Paper Gods, that returned them to the top ten winning them a whole new audience in the process.

Also joining Common People’s line-up on Saturday in Oxford and Sunday in Southampton is dance music trailblazer Katy B. Firmly at the forefront of the most recent wave of chart invading beat fanatics, Katy’s armoury of pop-rave bangers saw her last album taking the top spot, and with follow up Honey poised to be the soundtrack of this summer, you can guarantee she’ll hit the mark.

Previous Article
Duran Duran to Headline Common People Southampton Festival
Next Article
Shamir to Open For Duran Duran, Celebrates With Poignant ‘Hungry Like the Wolf’ Cover
News
Back to all news