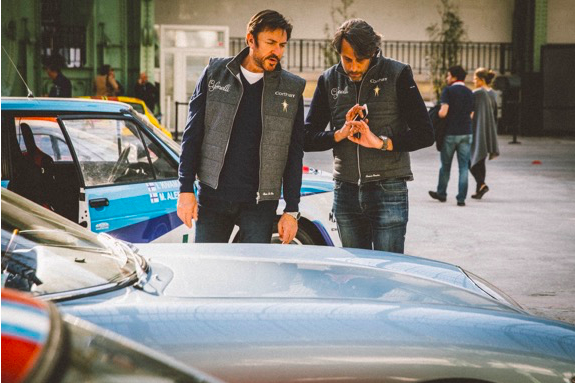 I just finished Le Tour Auto. Paris to Biarritz via Vichy, 5 days, 4 circuits, 8 hill climbs in a 1950 Jaguar XK120 - no top, no power steering, drum brakes all round, Moss crash gearbox & steel racing pipes. My arms are aching & my ears are ringing. But I did learn heel & toe double de-clutch downshifting while braking.

I was co-pilot to owner/driver François Pourcher; seen here goofing off at a gas stop.

We did the whole thing without technical support, but did not break down once. We saw plenty of other competition cars by the roadside with bonnets up, or on low-loaders - their rallies over. However, this car was built in Coventry by the same people who five year earlier were building fighter planes & bombers to send against Axis in WW2. They knew a thing or two about reliability, as a engine or part failure then would probably cost someone's life. They applied the same skill and rationale when they built the XK120. We looked after the car & she looked after us.

This was taken high in the Pyrenees on day 4.

My heartfelt thanks go to Corthay and to Cifonelli, without whose support we could not have taken part in Le Tour Auto Optic 2000.

Here is a picture of my trousers at the end of the rally.

And a big thank you to all Duran Duran fans for your support, those of you who posted & tweeted. Thanks to everyone who waved us through from the roadside & pointed us in the right direction when we weren't quite sure which way to go.

Previous Article
Simon Le Bon Wants You to Let a Bear Sh!t in the Woods
Next Article
Birthday Message from Roger
News
Back to all news