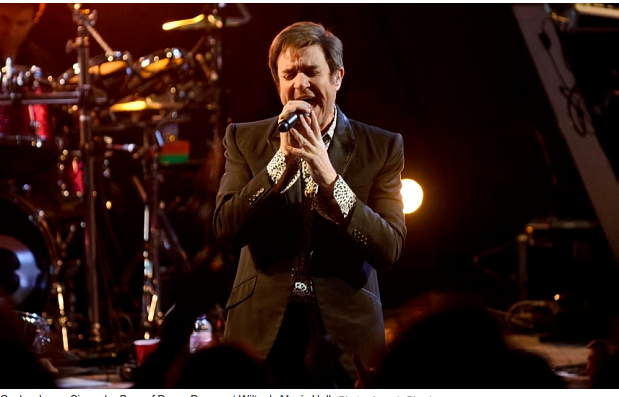 The crumbling edifice of this old institution has seen better days, and its façade could do with a lick of paint. But enough about Simon Le Bon. Wilton’s, the world’s oldest surviving grand music hall, was a spectacular venue for one of Duran Duran’s most intimate shows for decades.

It may just be down to the never-ending cycle of pop music, which ensures that once-derided genres fall back into favour every few years – but Duran Duran sound strangely current in 2015. Two key producers from the band’s past, Nile Rodgers and Mark Ronson, are presently enjoying unprecedented levels of ubiquity. It means the band’s strain of brash white funk could have emerged yesterday from Brooklyn or Bermondsey, rather than late-1970s Birmingham.

Perhaps with this in mind, the band seemed supremely relaxed at this benefit show for the War Child charity. Le Bon, looking svelte in skinny jeans and white brothel creepers, mixed cocky charm with the air of a man aware of the ridiculousness of singing about pulling models four years shy of his 60th birthday. Within fifteen minutes they’d played Hungry like the Wolf, The Reflex and Notorious, spreading unalloyed joy among the few hundred fans.

Bassist John Taylor, sporting a suit and trilby that brought to mind an Amish farmer, threw shapes as though he were playing an arena, and drew withering ribbing from Le Bon. Nick Rhodes, meanwhile, stood silently at his keyboards like a block of ice, the coolest man in the room.

Union of the Snake and Save a Prayer were ecstatically received and sounded pleasingly meaty due to Roger Taylor’s drumming and Dom Brown’s guitar work. Another highlight was Come Undone, a soaring ballad from the band’s post-imperial phase (1993). Its extended, Kate Bush-esque bridge made it Duran Duran’s hidden gem.

Le Bon relapsed into cheesy Eighties mode only once, during Ordinary World, when – apparently unironically – he splayed his arms and gathered in “the vibes” from the room, before releasing them above his head like a butterfly. The move was finished with a neat “namaste” bow. But crimes such as this were quickly forgotten with the closing one-two-three of Wild Boys, Girls on Film and Rio.

Judging by the daft dancing all around, this last song mentally transported the entire audience from the wet East End of London to the deck of yacht in the Caribbean, silk suits and all.

The only shame of the night was the lack of new material, which is not something usually said about a band whose prime was a quarter of a century ago. A new album partly produced by Rodgers and Ronson is due out later this year.

John Frusciante from the Red Hot Chili Peppers and Mr Hudson are also involved. It’s a tantalising prospect from a band on such good form.