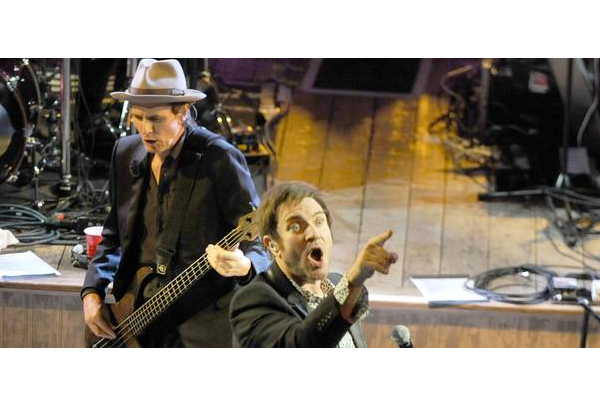 Not usually ones for the small gesture, only the siren entreaties of the Warchild charity could tempt arena stalwarts Duran Duran to play a tiny venue. And so, last night, they performed their most intimate concert since they escaped the Birmingham club scene in 1981, to 300 fortunate winners of Warchild’s ticket lottery.

“I could shake the hand of everybody here,” said singer Simon Le Bon, open-mouthed at the homely setting.

Often regarded as a guilty pleasure, Duran Duran are in fact pop’s great survivors, who have come through the drugs, the internal bickering and the career slump without splitting up. The four of the five who remain from their heyday are in their fifties, but are still New Romantic dandies at heart. Since there was a crowd — albeit a small crowd — they chose to please it, courtesy of a wishlist setlist, delivered by a seven-strong line-up with the clattering precision of a stadium show.

Their forthcoming album features Mark Ronson, Chic’s Nile Rodgers and former Red Hot Chili Pepper John Frusciante, but as bassist John Taylor noted: “You won’t be hearing any of it.” Instead, in a remarkable display of close-quarters muscle-flexing, there were no album tracks whatsoever — they delivered hit after hit after hit.

A triple whammy of Hungry Like The Wolf, The Reflex and Notorious set the early tone. Ordinary World added surprisingly convincing gravitas; their daft take on Grandmaster Melle Mel’s White Lines (Don’t Do It) remains hilarious; Rio has aged better than anyone could have possibly imagined in 1982; and Girls On Film morphed into Talking Heads’ Psycho Killer.

These art-pop devotees remain masters of the pop art, and while this hits masterclass may have been a supreme pleasure, there was nothing to feel guilty about.