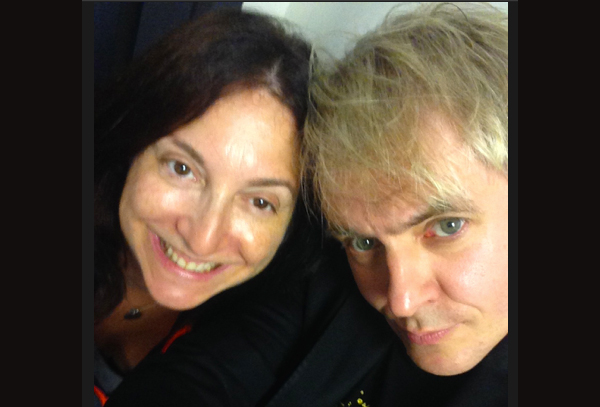 This year seems like it is pretty predictable - or, as the American's say, a lock! Nick and Katy both agree that it seems like the big categories are all sewn up, but still worth having an Oscar chat about!

"The Theory of Everything," Anthony McCarten

Nick: I should start by saying how much I enjoyed "Whiplash." It is niche subject, a movie about an unknown jazz drummer in music school. It so happens that it is the only movie that I've seen in the theater in London this past year where people actually applauded at the end. "Whiplash" really moved people and I would like to see it win. However I feel that "The Theory of Everything" will win, and I am OK with that.

Katy: I agree with you Nicholas, "Whiplash" should win and I think it will win in this category. I feel like like all the recent controversy on Chris Kyle has diminished "American Sniper"'s chances at winning. I did not care for "Theory of Everything" (more on that later). I don't think "Imitation Game" or "Inherent Vice" really have a chance at all.

Nick: "Birdman" showed that great things can come out of Hollywood - it is the best American film I've seen all year. Funny, touching, clever and very unique. I loved "The Grand Budapest Hotel" and this category is its best shot for Oscar glory.

Katy: I wouldn't mind if "The Grand Budapest Hotel" won, it was so clever and funny, and I don't think enough people got the chance to enjoy it. A screenplay for "Boyhood" seems impossible to me, but it was nominated so something must be there! It's a toughie. I just think "Birdman" was so unique and clearly, the writers didn't cave in to any "Hollywood"-esque endings.

Nick: I would love to see all five win. I've seen two of the nominated films, I stayed very Eastern Block and saw "Ida" and "Leviathan." I must admit that I am friendly with the director of "Ida," Paweł Pawlikowski, so I'd love to see him win. It's a beautiful movie although quite dark. I think "Ida" will and should win, but "Leviathan" is giving it heavy competition.

Katy: I've not seen anything in this category but I think "Ida" will win just based on what I've read.

"How to Train Your Dragon 2"

"Song of the Sea"

"The Tale of the Princess Kaguya"

Nick: I didn't see the the movies in this category and I usually do. I think "Big Hero 6" will win because it's Disney.

Katy: "Big Hero 6" was cute but didn't do the box office of what a Disney animated film usually does. "The Lego Movie" should win, even though it wasn't nominated, which was so wrong!! SO. WRONG. It is so not awesome that it wasn't even nominated!!

"The Salt of the Earth"

Nick: I haven't seen all the films in this category, but I know "Citizenfour" will win. Funny enough, I was invited to a screening of this film tonight but I had to decline because of our Oscar Kafe!

Katy: I haven't seen all the films in this category either, but I agree "Citizenfour" is the one to beat. Edward Snowden is so controversial and such a divisive character, once you see the movie, you can't stop talking about it.

"Everything Is Awesome" from "The Lego Movie," music and lyrics by Shawn Patterson

"Glory" from "Selma," music and lyrics by John Stephens and Lonnie Lynn (a.k.a. John Legend and Common)

"Grateful" from "Beyond the Lights," music and lyrics by Diane Warren

"I'm Not Gonna Miss You" from "Glen Campbell … I'll Be Me," music and lyrics by Glen Campbell and Julian Raymond

Nick: I am not great at this category. The choices are always so odd. The John Legend/Common track will win for "Selma." I am not a huge fan of the song but it fits what Oscar voters seem to want out of their Best Song. Due to the gross misuse of the word "Awesome," I can't vote for that song, even if Kathryn loves it. My Auntie Linda likes Glen Campbell so he can be my "should win."

Katy: "Everything is Awesome" is awesome! I worked with Tegan & Sara and also, The Lonely Island, so of course I want that song to win. Plus, Tanner and I sing the song a lot. However, I know how Oscar votes and "Glory" by John Legend and Common will win.

Meryl Streep, "Into the Woods"

Nick: Meryl is great in everything, but she has far too many awards, so she's a miss for me. I would love to see Emma Stone win for "Birdman," she was fabulous and had a great balance in a tough role. It's not her year though, and it's Patricia Arquette who will win for "Boyhood." She was sublime. To commit a few weeks of your life to a movie for 12 years is commendable to start. She gave a self effacing performance in every way and I would be happy to see her win.

Katy: I agree, it is undoubtedly Patricia's year, and well deserved after a long a career. The scene where it hits her that her youngest child is leaving for college literally put me away. And also, women age so much differently than men, so I thought her performance was so brave too. She deserves this win.

Nick: If "Whiplash" hadn't come out, I believe Edward Norton in "Birdman" would have been the frontrunner in this category. Ethan Hawke was terrific in "Boyhood" as well, but Ed was better in my opinion. There were a lot of proper performances this year, but it seems like all roads lead to J.K. Simmons. It was an extraordinary grandstand performance. "Whiplash" is such a unique movie, so it's nice it will be recognized through him.

Katy: I agree Nick, I think J.K. will win, and as great as he was, I wasn't as blown away by his performance as everyone else seems to be. He is a great character actor, and has, in fact, played another not-so-nice person on the TV Show "Oz." It seems people who aren't familiar with him are raving about this character in "Whiplash," but I feel like he's always good in whatever he does and this is a showy part that many actors could have run away with. Edward Norton's turn in "Birdman" reminded me what a great actor he still is.

Felicity Jones, "The Theory of Everything"

Nick: Julianne Moore is one of the few actresses of her generation that is still standing strong after 10 or 15 years. She has made mostly great choices in her film roles, is quite diverse and capable of playing a massive range of parts. On top of that, she usually wears the best dress, so I want her to win for that alone. There are other great performances in this category, but I am afraid Julianne is head, shoulders, and one red dress above everyone else!

Katy: Julianne Moore will win, and should win, for "Still Alice" - not only for this performance, but for the body of her work. She deserved to win so many other times, and this year the stars aligned for her. From "Boogie Nights" to "The Hours" to "A Single Man" to "Still Alice," Julianne is an incomparable actress. And a nice person too!

Eddie Redmayne, "The Theory of Everything"

Nick: The two performances that I thought were absolutely outstanding were Michael Keaton for "Birdman" and Eddie Redmayne for "The Theory of Everything." As I have mentioned, I loved "Birdman," and Michael Keaton's performance was fabulous. If you have seen the film, you know there are long scenes without edits, which are really hard for an actor, and he nails it. His part as Riggen Thomson is a role that comes to actors so infrequently, so it must have been a thrill for him. I would love to see him win.

On the other hand, Eddie Redmayne transformed himself in to Stephen Hawking, and gave such a powerful performance. "The Theory of Everything" is a real gem, and not a typical movie I would rush to see, but I wanted to support producer Eric Fellner, who is an old friend who worked on early Duran Duran videos. The only reason Eddie may not win is because Michael has had a longer career, which may influence voters. Good luck to both of them!

Katy: I agree that it has come down to Michael Keaton and Eddie Redmayne. Once Eddie won the SAG Award - the best predictor for the Oscar - the race became neck and neck. I still think, as I did when Jamie Foxx won for "Ray," that there are great performances and there are imitations. I am not saying Eddie wasn't terrific as Stephen Hawking, but the entire journey was laid out for him, and once he captured Hawking's charisma, his job was done. Michael Keaton had a much harder role, in my opinion, and was utterly fantastic. Is Riggen crazy? Is he smarter than everyone else? Is this all in his head? Michael Keaton is not typically thought of as one of America's Best Actors but after this performance I think people will have changed their mind.

Nick: I would give the Oscar to Alejandro Iñárritu as "Birdman" was the most interesting movie of the year in my opinion. "Birdman" was the film I thought the most about afterwards, along with "Whiplash." However, Richard Linklater...that was pretty daring too. To have that vision and then execute on it is something special. I would love to know how he wrote the film , it must have been an extraordinary process. The "making of Boyhood" could be better than the movie itself!

I wouldn't be surprised if Richard pulled off an upset. He did something no one else has ever done, which doesn't happen often anymore.

Katy: We are on opposite ends on this one. I think Alejandro Iñárritu will win but as far as a vision and execution of directing, Richard Linklater should really get the award. I'd be fine with either of them to be honest, but I think Alejandro will get this award because...

"Birdman or (The Unexpected Virtue of Ignorance)"

"The Theory of Everything"

Nick: I am glad "Whiplash" is nominated in this category. It is a small movie that hasn't been seen by a wide audience, so it is a win for the film that it got recognized at all.

I liked several movies in this category: "Whiplash," "The Grand Budapest Hotel," "Birdman," "The Theory of Everything" and "Boyhood." Once again, it is going to come down to "Birdman" and "Boyhood." There is no doubt that I preferred "Birdman" as a movie, and I would be thrilled if a movie that is so off-the-wall won the Oscar. In fact, it might make me happy for a full 24, or even 25, hours! However, I am not sure Oscar likes off-the-wall movies to win statuettes, particularly for Best Movie. Again, Richard Linklater's "Boyhood" is such an achievement, and he's been a great director over a terrific body of work, so I think that film is the winner.

Katy: I agree with you. I think people that saw "Birdman" either really loved it or really hated it. It WAS off-the-wall, and challenging, but to me, ultimately very satisfying (although of all the Oscar noms, I think "Whiplash" has the best ending.). I did not care for "The Theory of Everything," and don't think it's an Oscar worthy film. As I said with the screenplay award, I believe that some concern over the veracity of the stories in "American Sniper" has hurt that film's chances. The other nominated movies don't really have a chance, so I won't discuss them individually.

The 87th Annual Academy Awards is this Sunday (February 22) evening. We will be watching!