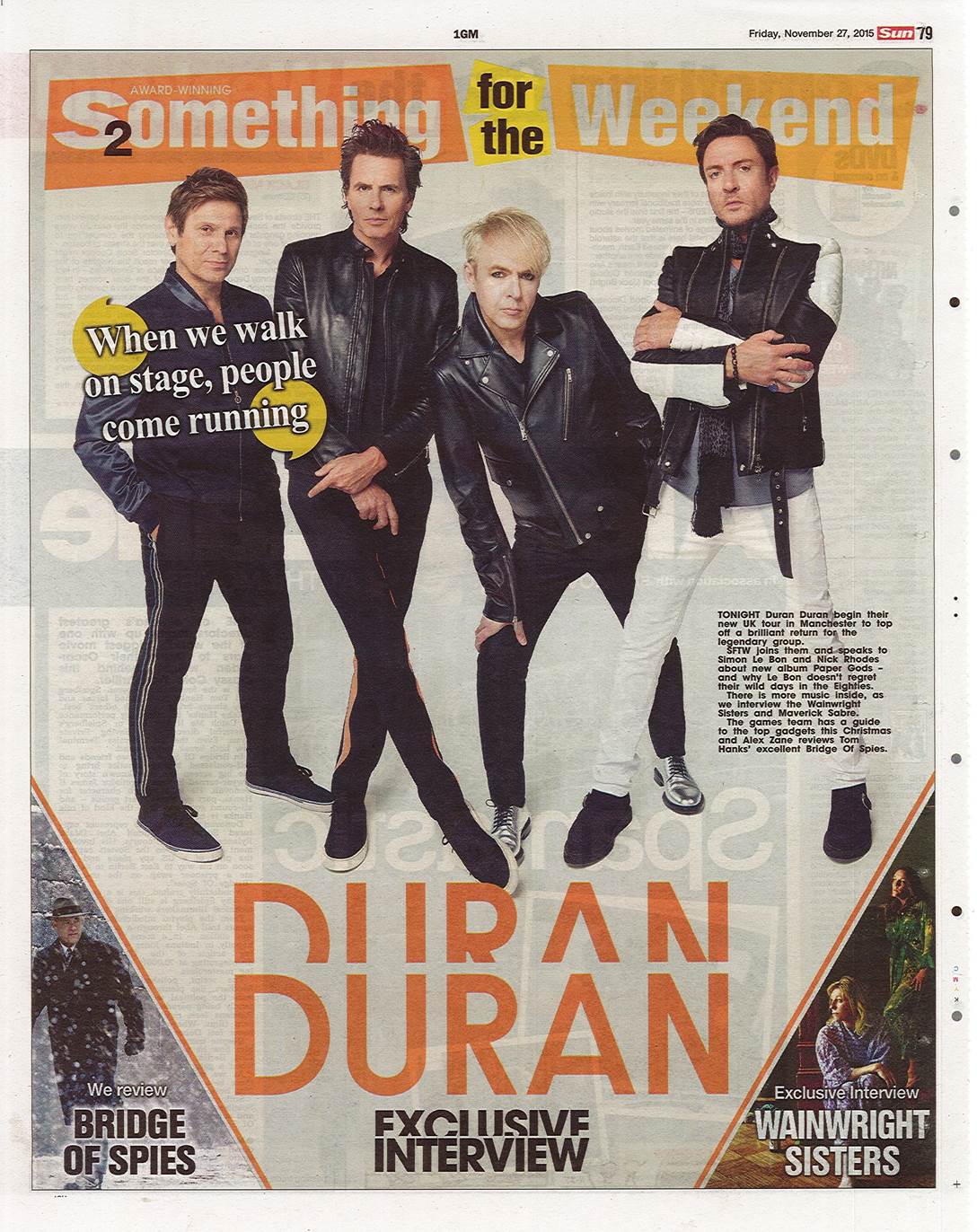 Duran Duran: The big difference now is we don’t get utterly sh*t-faced
Legendary band on surviving nearly 40 years of Duranmania

IN a warehouse, 15 minutes from Heathrow, Duran Duran are tweaking their set for their new UK tour.

Lasers, lights, sound and song lists are being studied, while the four — Simon Le Bon, John Taylor, Nick Rhodes and Roger Taylor — meander in and out of the production room, wardrobe and catering, high-fiving their crew.

As Le Bon tucks into a burger, I ask about the band’s renaissance following their 14th studio album Paper Gods.

The singer says: “It’s been a great year for us and a lot of that is because we are a good live band.

“We’re not intimidated by other acts and when we walk on stage people come running, because if there is one word out there, it’s that we are good live.

“That’s what happens when you do something for a long time. It’s a simple equation.”

Duranmania is still very much in force, nearly 40 years and 100million record sales since the wild boys of pop first emerged.

When Le Bon, 57, arrives on his 1997 Yamaha XT500 motorbike, a gaggle of fans, all in their forties and fifties, are waiting.

They are thrilled when their idol stops for selfies — even though he poses still wearing his crash helmet.

He later tells me: “That lot have been following us for years. There’s a group of fans we see all over the place. And they’re nice and friendly and we always talk to them.”

In the band’s heyday, Duranmania saw them mobbed by screaming, hysterical (mainly female) fans who would camp outside venues and their homes until they caught a glimpse of the heart-throbs.

They’d even try to ambush the cars they were travelling in. Not since Beatlemania had fans been so bonkers about a band.

Today things are a little calmer but just as enjoyable and their popularity hasn’t diminished.

Keyboardist Nick Rhodes says: “A lot of it is to do with keeping excited about music.”

The 53-year-old looks immaculate in a black suit and newly shorn bleached locks when we sit down during a break.

He continues: “As artists we are all big music fans and get excited hearing other people’s music, new music and how music and technology changes, especially with electronic music, which has taken over more in the last decade or so.

“And we also feel very comfortable in that zone.

“When we started we were fusing rock with electronic music and disco and, fortunately for us, that is the direction the world we mentioned took.

“It would have been impossible to say when we were starting out, and seeing what happened I feel very comfortable with what we did. We made some pretty decent decisions.”

Chic legend Nile Rodgers also appears, as does wild-child actress Lindsay Lohan, who Le Bon was already friends with (“It was a struggle to get her in the studio”). Others drafted in include singers Janelle Monáe and Kiesza and former Red Hot Chili Peppers guitarist John Frusciante.

“I think it’s bogus and it’s jumping on a bandwagon because everyone does collaborations. But John Frusciante approached us and hearing What Are The Chances?, the track he was on, it was ‘Wow, Duran Duran sounding different.’

“Then Mr Hudson approached us to do some writing and production and we said OK and then we had two songs in four days — You Kill Me With Silence and Paper Gods — the two most important songs on the album.

“And they formed the core, the real critical mass that the rest of the album could orbit around.”

Rhodes adds: “Having different vocalists made Simon realise that when you’ve made 13 albums already, you can afford to say people know what we sound like.

“And working with Mark again was special as he is a treasure and is always great to have in the room.

“It was Mark who said we should work with Nile again. He said, ‘You’ve known him for ever and he is back. You should call him.’

“We all loved what Nile did with Daft Punk, so John ran down the corridor, called Nile and he was in.”

Following the recent Paris massacre, Duran’s 1982 classic Save A Prayer made headlines when Le Bon tweeted they were donating all royalties from Eagles of Death Metal’s cover of the song to charity.

The rock band’s show at the Bataclan theatre earlier this month saw IS terrorists kill 89 people.

Le Bon says: “Music has a power to unite people. Good songs like Duran songs do that.”

And watching them run through their 1983 No2 hit Wild Boys, I ask why Duran Duran remain such a live force still today.

“We’ve got some amazing singers and dancers, who can really shake it. We’ve got incredible visuals and in terms of the set list we’ve got a really juicy repertoire to pick from.

“Obviously there are songs like Rio that you can’t not play because it’s synonymous with a certain time, feeling and a party vibe.”

Both Le Bon and Rhodes believe the present-day Duran Duran are a superior band musically.

Nick says: “We are without a doubt a better band, both in the studio and on the stage.

“It’s unfair to say the shows weren’t super-exciting and important in the past but it certainly was a little crazier than it is now and technology changes so much.

“Now we all have in-ear monitors, which makes a world of difference.

“Simon used to not be able to hear himself sing between all the screaming and volume.”

Le Bon adds: “I’d say we were good and we were exciting but the range wasn’t there.

“For me it’s about being able to sing in tune for two hours without blowing my voice out shouting.

“Back then I was competing with a guitarist playing his sound so loud. And that’s not blaming (former guitarists) Andy Taylor and Warren Cuccurullo.

“Dom Brown, who is with us now, also plays loud but technology has made things better. When I look back now at the Eighties we were not even scratching the surface of our abilities to entertain.”

At the height of their fame Duran Duran partied and dated supermodels before settling down to have families. Le Bon laughs and says: “We don’t get so completely sh*t-faced, that’s the biggest difference — and we are not having quite as much casual sex.

“It doesn’t sound like so much fun now does it? But it is.

“It’s great to party, when you’re in your twenties you can do it. Your body reacts to drugs, alcohol and staying up all night for three days in a row in a completely different way.

“I’m not suggesting people go out and take drugs. That is a personal choice and it’s not up to me to suggest anything to anybody.

“Partying then, there was something subversive about it, it was anti-establishment. Whereas now, so many acts have come out of the establishment, they are products of the institution of TV entertainment.

“Good luck to those X Factor people and well done because it’s hard to be successful and anyone who has success, whatever way, deserves applause.

“But my mum likes that stuff so it’s no wonder a lot of young people rebel against that type of music. And that is fair enough. But there are great people out there offering an alternative.

Look at Tame Impala, Kevin Parker is one of the great pioneers of contemporary music. He’s taking things in his own direction.

“And that is where we see ourselves. With those people who want to make music that makes people take notice, because it’s new. I’m a complete music nerd. I am into music in a really big way.”

Now Duran Duran have come round to the idea of collaborating, with the success and pride in their latest album, who would Le Bon like to work with next?

He says: “There’s a great Estonian violinist called Maarja Nuut. I love the way she plays. And I’m a huge fan of London Grammar, I’d love to do something with Hannah Reid. Her voice is incredible.

“I’m a big fan of Die Antwoord, who are South African rave rap. I don’t know if it would work but I’d love to have a go with them. Maybe in an Aerosmith/Run DMC way.”

Le Bon says: “Like making the album, there has been a lot of stepping out of our comfort zone recently.

“Bestival was something special. We didn’t play festivals for over 25 years. Of course there was Live Aid but actual festivals and getting into that mindset is something we haven’t done.”

Le Bon says with a smile: “Well we’ve not been asked.”

Rhodes adds: “I’d love to do more festivals. We never did them early on so much because we liked to have control over our production, sound and lights.

“Again because of the sophistication of sound now and lighting it has all changed, so we are much more open to doing those things. Bestival for us was a real thrill.”

So you would consider Glastonbury then, I ask.

Rhodes says: “If it was the right slot then yes. If they’ve got our phone number then it would be an easy one for us.”

And with that idea planted into this Duranie’s mind, it’s time to say farewell and see you at the front.

— Duran Duran begin their UK tour tonight at Manchester Arena. Head to duranduran.com for all dates.