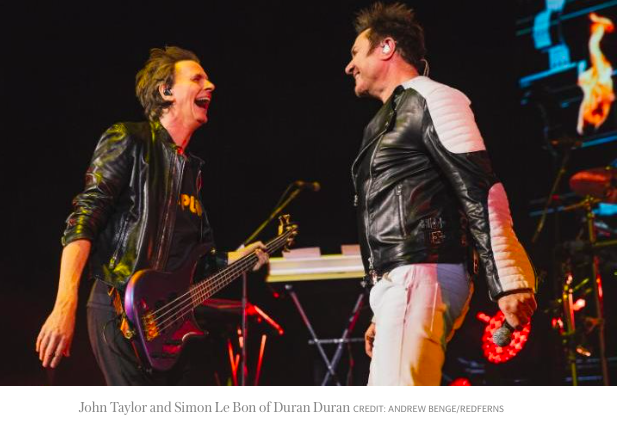 Neil McCormick, music critic
28 NOVEMBER 2015 • 11:34AM
Duran Duran dedicated the opening night of their British tour to the victims of the murderous attack on the Bataclan concert hall a fortnight ago. “We couldn't turn up and not mention what happened in Paris,” said singer Simon Le Bon when the veteran band appeared for an encore. “I don't really want to talk about terrorism. It's not really relevant to us. But music came under attack that night.”

Duran Duran's personal connection to the Paris massacre came through the band's friendship with Eagles of Death Metal, the American rockers whose fans were attacked during their concert at the Bataclan, with 89 killed. Earlier in November, both groups had joined together to perform a version of Duran's 1982 ballad Save A Prayer on Chris Evans's TV show TFI Friday.

A Facebook campaign to get Eagles of Death Metal's cover version of Save A Prayer to number one in the singles chart has led to a sudden surge of interest in the song, and Le Bon announced on stage that all proceeds from the single would go to charity.

The 57-year-old singer of a band famous for their extravagant lifestyles and youthful hedonism seemed understandably uncomfortable making a speech on such a weighty issue, but he spoke with emotion and sincerity. “We dedicate this to all who suffered that night, God bless them,” he declared, before the band delivered their own version of Save A Prayer, with the 21,000-strong audience singing along and raising their phones in twinkling salute.

It was a rare moment of gravity on a night that celebrated the baffling but enduring power of frivolous pop. Duran Duran, as Le Bon acknowledged, have been around for a long time. They formed in Birmingham in 1978, and achieved success as poster boys for the New Romantic movement, a gaudy reaction to the ugly fashions and angry energy of punk rock.

With their big shoulder-pads and bigger hair, flashy clothes and shallow songs, they might have seemed destined to become one of pop culture's flash-in-the-pan acts, instantly successful but quickly forgotten. Yet here they still are, decades on, touring arenas to a largely middle-aged audience for whose youth Duran provided the giddy soundtrack. “Wild boys never lose it,” Le Bon sang during a rapturously received performance of their thunderous, ridiculous 1984 hit; and, as if to prove the point, Le Bon even delivered the spectacular high note that famously eluded his younger self at Live Aid in 1985: “Wild boys always shine!”

The four surviving band members look trim and fit, just about able to pull off their inappropriately tight clothing. Supported by two musicians, on guitar and sax, and two dancing backing vocalists, they delivered vigorous renditions of their big hits and also dared to perform half a dozen new songs from recent album Paper Gods which, on the surface, are fairly indistinguishable from their old classics.

I'm not sure whether this is an entirely good thing or not. You couldn't exactly say they have matured: their chosen mode has always been something that welded the propulsion and slickness of electro-disco to the anthemic drama and muscle of guitar rock. The results are all blast and bombast, a triumph of style over content, topped off with absurd lyrics delivered with a conviction that belies their meaninglessness.

But perhaps this is exactly what we need right now. When he spoke about the Paris attacks, Le Bon expressed how baffling it is to ordinary people everywhere that a terrorist ideology could seek to make an enemy of music lovers. The sight and sound of thousands of pop fans joyfully bellowing “This is planet Earth, ba-ba-ba!” is a response that cannot fail to gladden the heart.