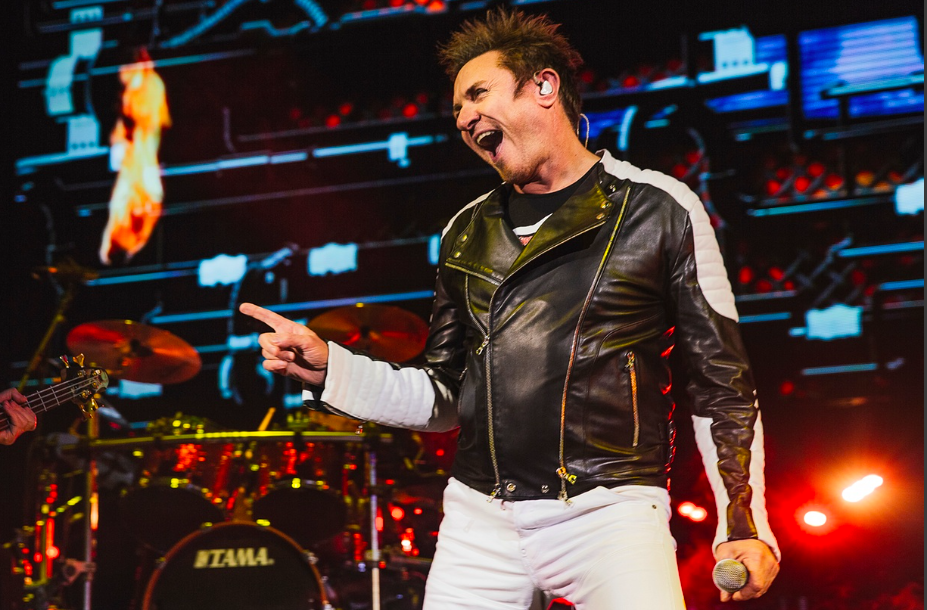 First Direct Arena, Leeds
From a tribute to those killed at Paris’ Bataclan to a sendup of their Grandmaster Flash cover, the Wild Boys deliver both gravitas and good cheer

When Duran Duran and Eagles of Death Metal performed the former’s hit, "Save a Prayer," on TFI Friday earlier this month, it seemed no more significant than two friendly bands of two different eras joining forces. The song, however, subsequently became the last completed by EODM in the Bataclan in Paris before terrorists opened fire, killing 89 people. So when Simon Le Bon introduces it in Leeds, silence gives way to defiant cheering.

“A terrible thing happened, but it’s music that’s under attack, and we’ve got to keep on having fun and never give in,” he says, before explaining that proceeds from the Eagles’ cover version, which rocketed up the charts, will go to “something that brings people together, and is peaceful”. The veteran new romantics aren’t often accused of packing gravitas, but when the crowd unite to sing the song it is beautifully moving.

In their 80s heyday, of course, Duran were synonymous with what Le Bon calls “light and fluffy”: white suits, big shoulder pads, yachts in videos and a superfan, Princess Di. Thirty-five years after they debuted in Birmingham’s Rum Runner club, however, their copper-bottomed pop classics have become as much a part of British culture as Big Ben or beans on toast. Helpfully, the four remaining Wild Boys have barely aged. At 57, Le Bon can still get away with wearing magnificently preposterous sequined trousers and wiggling his bottom. They tackle their much lampooned cover of Grandmaster Flash and Melle Mel’s White Lines (Don’t Do It) – a new romantic really shouldn’t rap – by sending it up even further, complete with closeups on a screen of keyboardist Nick Rhodes laughing like a drain.

There is sublime poignancy in Ordinary World, the song that rescued them from the scrapheap in the 90s, and its exquisite chorus: “We won’t cry for yesterday.” They avoid much-loved oldies The Reflex and The Chauffeur, and don’t always choose the best songs from their new album, Paper Gods. But Last Night in the City – “We’re gonna live this night, yeah … like its our last night” – provides another defiant highlight. Everything that is wonderful about pop music seems to occupy the triumphant final half hour, as a sea of blondes, brunettes and husbands come together to bellow Planet Earth, Girls on Film, Rio and the rest. Every arm is raised skyward in a giant communal bonding, an audiovisual illustration of Le Bon’s insistence that “music is a healing force.”