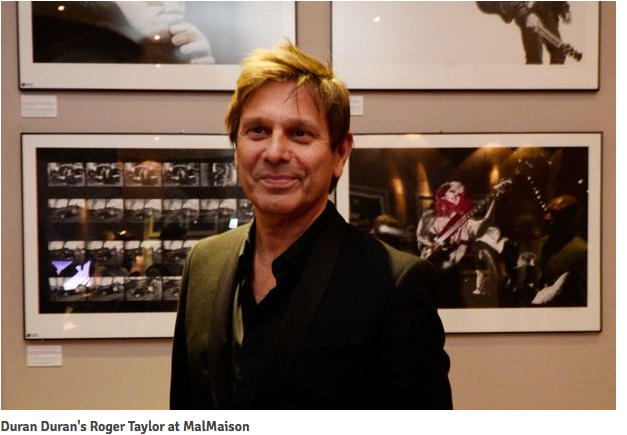 Duran Duran drummer Roger Taylor came to Birmingham's Malmaison Hotel as guest of honour at the launch of Careless Memories, an exhibition of never seen before images of Duran Duran.

Photographer Denis O’Regan captured the candid photographs of Duran Duran during the band's record breaking 1984 tour in US.

Now they are the focus of a new book. But what does Roger make of it all? Alison Jones chatted to him to find out.

What is it like being confronted by your 30 years younger self?

It is like looking at one of your children, actually.

Not many people’s lives are documented that fully at that age.

It’s great because, when you are that age, you are not particularly in the moment. It can pass you by very quickly, so it is fantastic to have a record.

Denis had a lot of freedom, getting you in unguarded moments

You can see all the different moods there. Some of them look happy with the whole thing, others...there is obviously a little bit of strain going on there

It is quite interesting to see all the different personality traits and moods coming through, which I think Denis was very good at capturing because he was everywhere, like the fly on the wall. He was backstage. He was on the plane. It was a peep behind the gloss.

Denis was such an affable character that we just took him into the fold, and we didn’t take many.

What was it like being on that tour? You were huge in the UK and breaking America.

I think I was slightly shocked by the height of that fame we had achieved so quickly.

I never thought the band was going to become a huge global success in two or three years. So it was a bit of a shock. You were kind of like on a runaway train. It felt like you weren’t on control of your destiny sometimes because you had record companies, you had managers, you had agents and they were kind of running the show.

How wild did it get for The Wild Boys?

It wasn’t as wild as you expect, actually. People do think that it really was ‘the wild boys’ but we were working really hard.

We made three albums in like four years. We were touring constantly. It was hard work.

The great thing was we came from a city that had a real work ethic so we were happy to take on the work.

But we were no different to any 23 year olds out there really. We had a good time but we worked bloody hard.

The response to you in America must have felt overwhelming.

It was like zero to hero in about 20 minutes, It seemed like we were playing at the Rum Runner in Broad Street one day and we were at Madison Square Gardens the next.

I will never forget that I flew my parents from Birmingham to New York and they came to see us at Madison Square Gardens and they were just blown away.

This little kid that has been playing drums in his bedroom a few years earlier was suddenly on the world stage. That was an incredible moment.

Did they worry about you having another career to fall back on?

I’ve still got those words echoing in my head.

It is like winning the pools, becoming a pop star. ‘You have got to get a trade behind you’.

Luckily they stuck with me and allowed me to practise and make all the noise I needed to. They supported me.

I owe a lot to my parents. My dad worked in the Rover plant at Solihull but he was always learning something. He wouldn’t come back from work and go down the pub. He would sit and learn flamenco guitar and harmonica or something like. My mum was a bit like that. I go that from my parents and I taught myself to pay drums.

But it wasn’t long after the American tour that Duran Duran members split to pursue other things, like The Power Station and Arcadia

I don’t think the strain was showing on this particular tour, we were pretty happy as a band at that point. But it wasn’t long after this that people started to go their separate ways and take on other projects, so maybe that was a result of the pressure cooker environment that we were in.

The passion of the fans did make your life very limited. I look at the guys from One Direction and the success they are having and I kind of feel for them.

When you have that teenage audience, they want every part of you. They devote a lot of time for you. They wait for you outside the hotel 24/7, and that becomes difficult because you can’t just walk out of the door and go shopping, or go and jump on the tube.

You think ‘Wow! They are touring the world’ but they’re a prisoner of their own success. And these days everyone has a camera on their phone, a video on their phone, so it is constant exposure.

But, as I said, I wouldn’t change it.

When I left the band in 1985 I used the exact words as the guy (Zayn Malik) who has just left One direction. ‘I want to live a normal life for a while’.

That was what I wanted to do. I had gone from 18/19 years old, propelled into the whirlwind of fame and I wanted to be normal for a few years.

Did you miss it, was that why you stepped back into the fold?

I think, once you have been in band like Duran Duran, there is always part of you that wants to get back to it, so it was only a matter of time before I did and we had that big reunion.

It is difficult to do anything else. I was always going to be Roger Taylor from Duran Duran, whatever I did with my life.

Was that easy to do? Had there been any arguments when you said you wanted to leave?

I had remained friends with them. We hadn’t fallen out so when I got the call from John we were on friendly terms and we were able to go back.

There is a new Duran Duran album coming out this year, what can we expect?

It hasn’t been named yet. We have worked with Mark Ronson, Nile Rodgers, Ben Hudson. It is a great album.

There is some really funky, upbeat stuff on it. It is reminiscent of "Notorious." There are also some very moody deep cuts on the album. It is a true Duran album, it has got a bit of everything.

Do you all have an input or is there one of you who is the driving force in the writing.

It is very much a democracy, we are all on an equal footing within the band, We kind of write like the Beatles would have written. The four of us in the room for every part of the process.

What about a tour?

We do plan to tour but there is nothing scheduled yet. We are playing some festivals We will be in Barcelona at the Sonar Festival, we are going to America in July, we are headlining one of the days at Bestival. We are slowly getting the engine running again.

Duran Duran is such a massive part of this city musical history, do you feel you have had the recognition you deserve? What about a blue plaque on the site of the Rum Runner or a star in Broad Street?

We don’t expect anything. People know where we are from, we know that Birmingham is our roots and we are very proud of them.

I don’t think we have a star here yet, maybe one day.