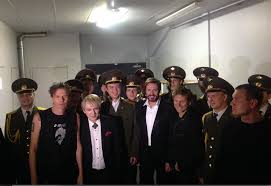 The White Night Festival is an annual international arts festival during the season of the midnight sun. This particular part of the festival also featured young, up-and-coming artists from around the world, and is telecast on Channel One Russia. Duran Duran opened the evening and performed three songs: "All You Need Is Now," "Sunrise" & "Notorious."

Afterwards, Simon gave out The Grand Prix Award to the top competitor in the International Song Competition. He also took a minute to share with the audience that the band hope to come back to Russia next year for some live dates.

Nick & Simon at the Fabergé Museum