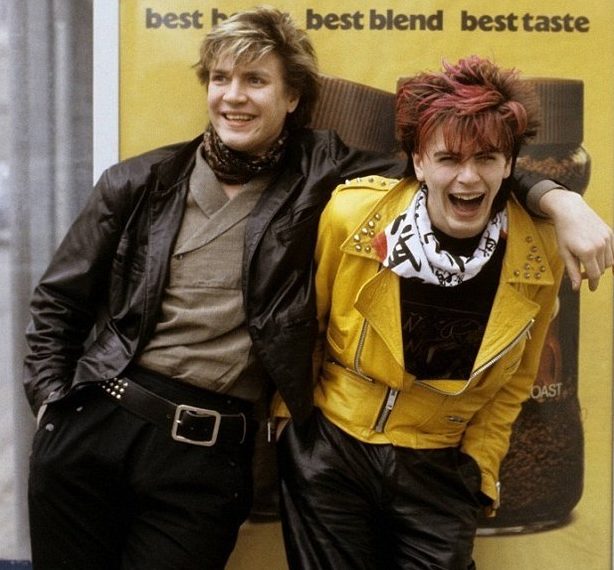 1. The first single released from Rio in the UK – “My Own Way,” which made it to #14 on the British charts – never saw release as a single in America.

After the success of “Girls on Film” in the UK, Duran Duran needed a stopgap-measure single to keep them fresh in the minds of music fans while recording the Rio album. “My Own Way” served that purpose handily: in addition to hitting #14 in the UK, it went top-20 in Ireland, was a top-10 hit in Australia, and actually topped the charts in Portugal.

At the time, however, Duran Duran hadn’t yet had their first hit in the States at the time – that wouldn’t come until “Hungry like the Wolf” – which meant that there was no rush to get “My Own Way” into US record stores, and in the end, they ended up recording a new version for Rio, anyway. Still, you may be wondering why didn’t get it a belated release after the band became a big deal over here, and although we don’t have a definitive answer for that, it’s probably because the band themselves never liked it very much: in a 2008 interview with The Herald Sun, John Taylor said of the song – and then repeated the sentiment – that it’s “not a favorite.”

2. It took three tries before “Hungry like the Wolf” was fully embraced by American radio stations.

In an interview with the Onion A.V. Club, the aforementioned Mr. Taylor described the video for “Hungry like the Wolf” as being the moment Duran Duran became a full-fledged pop phenomenon (“We went from being sort of like a club band, an underground band, to being, like, ‘Wow!’”), but he also acknowledged that they might never have made it in the States if their label hadn’t refused to give up on the song’s commercial potential.

“We were fortunate in that we were signed to a British record label that had a subsidiary in the United States, which was Capitol,” said Taylor. “The London office was really able to kick their asses and tell them, ‘Listen, you’ve got to make Duran Duran happen.’ I mean, “Hungry like the Wolf,” it was sent to radio three times. It got three separate releases to radio, that song did. It just had to be a hit. Capitol had to pull out all the stops.”

3. Andy Taylor ended up hospitalized as a result of filming the video for “Save a Prayer.”

A scene in the “Save a Prayer” video which involved Andy Taylor playing air guitar while perched on a branch turned into a nightmare when Taylor, as a result of having indulged in a bit too much alcohol, fell off the branch and went face-first into the water below. As Taylor recalled in his autobiography, Wild Boy: My Life in Duran Duran, “falling into a lake that’s been used as an open toilet by elephants is not a pleasant experience,” but his hospitalization came not from the fall but from the ingestion of the water, although he didn’t feel the effects until a week later, when Duran Duran was on tour in Australia.

“I was feeling hot and sweaty onstage in Sydney when I was suddenly doubled up by excruciating stomach cramps,” wrote Taylor. “I managed to play to the end of the set, but during the encore I had to quickly dash behind an amp where I was violently ill.” Things only continued to get worse, and not long after the band returned to the UK, he was rushed to the hospital and temporarily suspected of having malaria, but after transferring to a private hospital, “the medical team realized where I’d been (and) I was diagnosed as suffering from a nonspecific tropical virus that I’d picked up from the dirty water in the lagoon!”

4. Much of the music of the album’s title track was recycled from two earlier songs.

Given that it’s one of the most iconic songs in the band’s discography, it’s strange to think that “Rio” is actually a bit of musical Frankenstein’s monster. The verses were adapted from an early Duran Duran song called “See Me Repeat Me. The chorus, however, was inspired by “Stevie’s Radio Station” by the band TV Eye, fronted by Andy Wickett, who – prior to Simon Le Bon beginning his tenure – went on to briefly front Duran Duran as well. (According to the Duran Duran Wiki, Wickett would perform the song with Duran Duran, and after he left, they continued to perform it, changing “Stevie” to “Rio.”)

5. Simon Le Bon’s lyrics for “The Chauffeur” helped him get the gig as lead singer for Duran Duran.

The song’s Wikipedia page refers to this story as having “become part of the Duran Duran legend,” and while that sounds a bit melodramatic, it’s not untrue. While in the employ of Paul and Michael Berrow, who ran the Birmingham nightclub known as The Rum Runner, one of the club’s barmaids suggested that her ex-boyfriend might make a good singer for the band. In short order, Simon Le Bon auditioned for the gig, and when he did, he came armed with a collection of poetry and lyrics, including – you guessed it – the lyrics which soon found their way into “The Chauffeur.” Yep, pretty legendary.

6. The lyrics for “Hold Back the Rain” were written by Simon Le Bon as a message to John Taylor about his drinking and drug use.

In Duran Duran’s episode of Behind the Music, Le Bon described his bandmate as “going off of the rail a little bit” in the days prior to the recording of Rio, “staying out too late, taking too many drugs, drinking too much, and going home with the wrong kind of people.” Rather than confront him directly about the situation, however, Le Bon instead decided to write a song about it. It’s hard to claim that it actually had an effect, since Le Bon has since said, “The night I wrote it, I just slipped a copy of it under his door, and he’s never even mentioned it to me, never,” but at the very least, Taylor cleaned up his act a year later.

Courtesy BuzzFeed. Click to hear sound clips from each of the songs!