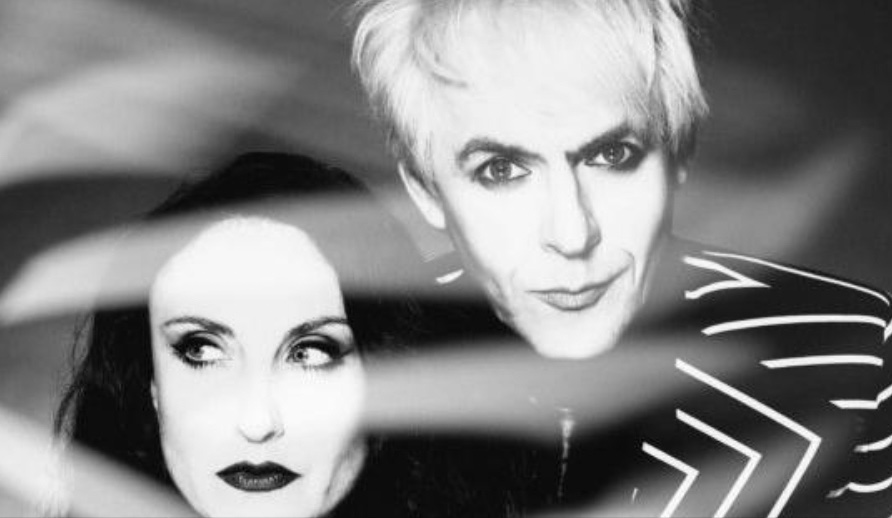 f you’re a fan of Duran Duran and their keyboardist Nick Rhodes, 2021 was quite a year. The Fab Five released their superlative latest album Future Past, and Rhodes collaborated with the talented singer, musician, and multimedia artist Wendy Bevan on the four-album Astronomia series that sonically mirrors the majesty and mystery of space and the universe. It’s an enchanting collection of electronic and electro-acoustic soundscapes inspired by astronomy and mythology. The final installment, Astronomia IV: The Eclipses of Algol, arrived on December 21.

After being introduced through a mutual friend, Rhodes and Bevan bonded over shared artistic passions, and Rhodes subsequently produced Bevan’s forthcoming solo album, tentatively titled Alone with the Unknown. But when the pandemic delayed its release in early 2020, they began experimenting with soundscapes. Intrigued by their musical union, Rhodes soon proposed a series of four instrumental albums, each one carefully curated and to be released on a different solstice day in 2021. They mainly worked separately—she in her sunny LA studio, he holed up in his darker London one—and played off of each other’s ideas and sensibilities. They became quite prolific.

The duo recently spoke with us to discuss their epic, star-spanning collaboration.

Wendy, you have a very eclectic musical portfolio. The Daughter, Sister, Mother EP is very ambient, then you have stuff that’s synth-poppy and New Romantic, and the Starless Night EP has a Julee Cruise/David Lynch vibe to it.

Wendy Bevan: They’re quite different, but they all have this similar essence. How we first started working together was because Nick is producing my next album, and then we diverted on this Astronomia project because I’d been actually writing all these pieces for some years, and, obviously, Nick has a catalog of pieces too. That’s when we suddenly joined the dots and it became this universe that we’ve created.

Was it nice, after doing music for so many years, to still have that naivete of “Why not, let’s just see what happens”?

Nick Rhodes: I think if you let go of that, that’s when you become old. Artists need to be childlike. If you lose your curiosity, and your fascination and the excitement with making something new, then I don’t know what’s left. For me, every single day when I go into the studio, I feel like I did when I was a little kid in the toy shop because there’s so many things to do in there. And I know by the end of the day something, somehow, will have happened. I’m never sure what it might be. But usually it’s something magical and positive in some kind of way.

Doing this with Wendy, we opened up Pandora’s Box, actually, because she thinks in a very different way than I do musically, which is fantastic. She’d do something, and the files would arrive and I’d open it up and I think, “Where does it start? Well, it doesn’t really have any time signature,” and, “Oh, it actually changes chords just whenever it feels like it, how great.” That’s how we unraveled the project because, in a way, I was trying to make some sense of Wendy’s chaos. And Wendy was trying to make my sort of ordered pieces sound more beautifully chaotic. So it worked really rather well.

Wendy: I certainly love to challenge your order, Nick. The contrast in how we work has definitely kept us together.

Wendy, as far as your next album, what can we expect?

Wendy: Astronomia has certainly given us an idea of how Nick and I write and create together. We’re capable of creating these universes, and my next album will be something along those lines. It’s not an extension of Astronomia at all, but there’s definitely those threads of it being otherworldly and ethereal. Very theatrical, too.

Nick: It’s got a little mood to it. Wendy plays at creating atmospheres, and I’ve always admired that in other people’s records. Somebody asked me the other day what my favorite record was of the 1990s—I said it was Portishead because when that came out it was the most perfect album. The whole atmosphere throughout remained, and you were within that world. Those are the kind of albums that I think really are special. All the albums I liked when I was a kid growing up and all the albums that I like now are ones that feel very complete and put you in a space. Some people do that with cinema. David Lynch, for example, is particularly good at that. I love being in his world, whether it’s Twin Peaks or Mulholland Drive or any of the movies, really. You’re experiencing something for that period of time, and Wendy’s album really has that.

Wendy: That’s what I certainly aim for with my work as an artist—it’s creating a world. It’s a feeling that you can’t express necessarily any other way, but it’s the combination of sound, melody, performance, lyric.

I think about the fact that a lot of the New Romantic and synth pop pioneers have followed the same path as Duran Duran. It seems that even as you all were innovating in the pop world in the ’80s, you always had your ears tuned into something else as well.

Nick: Wendy and I often talk about Harold Budd—that album that he did with [Brian] Eno, The Pearl—it’s a real gem. It’s an atmosphere, it’s a feeling that you get from it, and it’s a classic of its genre. I love John Foxx, and he was hugely influential on the very early Duran Duran stuff. I went to see a band called Eddie and the Hot Rods when I was a really young kid just because Ultravox with John Foxx was supporting them, and they were spectacular.

How aware were you of each other’s music prior to meeting?

Nick: Well, before I met Wendy, I wasn’t aware of her music because she’d been much more of a cult artist, really. But then when she started directing me to a couple of things to listen to, I thought, “Wow, OK, this is really not something I was expecting at all.” I didn’t particularly have any specific expectation, but I was really quite taken with it, especially some of the stranger, more beautiful, older ambient pieces. I’ve always liked violin, but I’ve never found an easy place for it in the music that I’ve been making with the band. So the opportunity to have the beauty of that live instrument with the way that Wendy plays it—because it’s through lots of effects pedals, and it’s a very different style—that was enormously appealing.

Wendy: I obviously knew Duran Duran and Nick’s music. I grew up with a lot of this music. I think one of the first Duran experiences I had was “A View to a Kill” which is one of the tracks I particularly love from the Bond movies. But as we said, Nick and I met through a mutual friend, so we hadn’t met each other. It was just literally then when our worlds started to collide. I thought Nick would be a fabulous producer for my next album because of everything that he created in the past and has still been creating as a musician. I thought the collaboration would be really interesting, which it obviously has turned out to be. I’m very proud of the work that we’ve done together.

Nick, on Astronomia and Future Past, is there any one track on each that you really love that you think expresses your style the best?

Nick: On the Duran album, I like one of the Giorgio Moroder tracks best at the moment. But that could change by the day. I like one called “Beautiful Lies’ just because it was the perfect fusion of Moroder and Duran. I could see it in my head, and I could hear it. But making it happen, we thought, “Is it going to be easy or not?” It actually was quite easy with him, and everything fell into place. But that’s almost exactly what I’d imagined, so it was nice to see it come to life.

With all the Astronomia records, each track is like a little jewel to me. On [IV] I love “Rainfall of Diamonds.” That’s one of the ones that Wendy added at the last minute, and I didn’t think that was going to make the album. I was just blown away, and it just turned into a special moment on the record. Wendy and I really are looking for a mood throughout the album. So this fourth album is certainly the most rich, textured, and orchestral of the albums.

Are you guys planning to do any live performances at all?

Nick: Well, that would be great. With the type of music we’ve created, we’ve made a little bit of a rod for our backs, because the way to do it really would be with a proper big orchestra with some live analog synths and percussion. And obviously with Wendy singing. She’s piled up vocals on things. We’d need backing vocals and things to do it properly. But I’m sure we could pull something together in the modern way with a certain amount of track and some live stuff.

Wendy: I just think it would be such a dream after this journey that we’ve experienced. We’ve created a dream project, so we just have to find a way of making that a reality. What we would need is live instrumentalists. An orchestra would be incredible, but it would be a big, big project to take on. FL