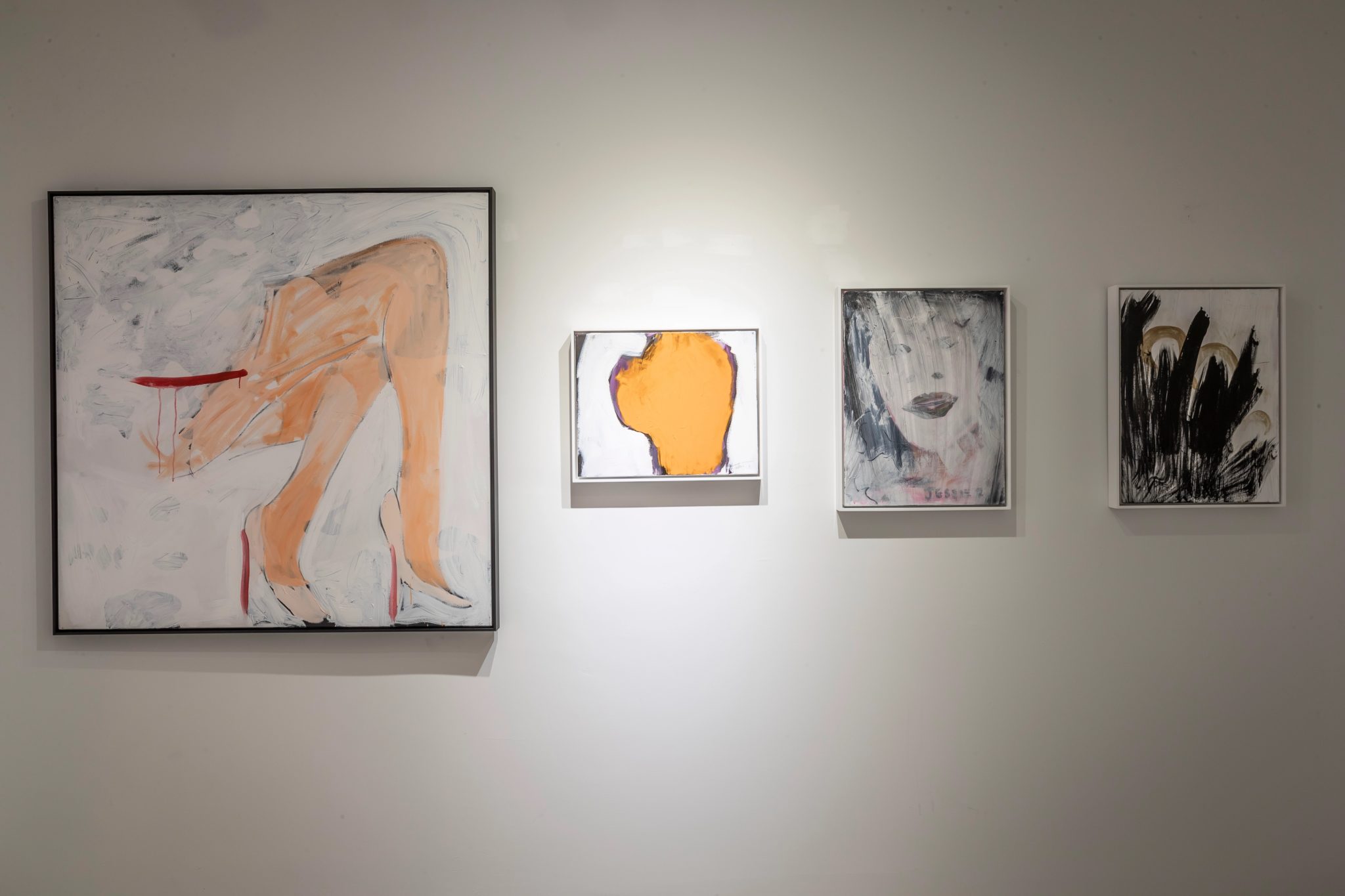 As cofounder of the iconic new wave band Duran Duran, British musician and songwriter John Taylor is no stranger to the spotlight. But this month, Taylor vaults onto a different artistic stage with his debut fine art exhibition “Not Broken, Unfinished.”

Throughout the pandemic, Taylor mined family pictures, personal memories, and his earlier formal art education to produce a new body of work. The exhibition features seven of his paintings—ranging from the abstract to the figurative—and a suite of “Cover Versions,” 12 inkjet on canvas prints, a series of mock art magazine covers that play with the notion of art world branding and their imprimatur. One of his Artforum covers, for example, depicts three subjects in a park, inspired by an old photograph of Taylor’s mother, with her friends, as a young woman.

Presented by One Hour Ahead, the exhibition also marks the arrival of a new contemporary space in Aspen’s burgeoning downtown art scene. “Not Broken, Unfinished” is one of two shows currently on view at the gallery, which opened in February.

Half of Taylor’s show has already sold, according to One Hour Ahead’s founder, the Aspen-based art adviser Sarah Calodney.

Taylor sat down with ARTnews via Zoom from his home in Los Angeles to speak about his newfound artistic practice for the first time.

This interview has been edited for length and clarity.

ARTnews: Have you been a painter as well as a musician and songwriter this whole time, and Duran Duran fans just never knew this side of you?

John Taylor: I’ve been aggressively painting for three years, but I had always been painting and drawing in my childhood. I was at art school in Birmingham when I collided with punk rock and began Duran Duran. That’s where we did our first gig. At that moment, I got caught up in the excitement of making music, as opposed to a career in any kind of art. Nick Rhodes [a Duran Duran cofounder] and I are both really visual. For us, sometimes, the design work that comes along with being in a band is almost as fun as the music-making. From the stage design to the branding, logo designs, and merchandising, it’s quite a playground, if you are aesthetically minded. But initially I returned to drawing as a therapeutic strategy.

I was talking to my therapist one day, and I said, “I need to visualize this and I need colors.” It’s not dissimilar from Carl Jung’s color theory. He uses color to try to define emotional places. It was as though I went underwater and haven’t come up since. The first few things I produced I would call smudge art. The process was very sensual and physical. I wasn’t trying to say anything.

Taking a journey with my band, like I have, is a privilege. One of the things that happens is that people tend to come to you when you’re successful in one field, and ask, “Hey, would you like to do a clothing line?” or “I want you to be in my film.” You go from being a musician to being all sorts of things. Very quickly, I got out of the idea that my drawing was just a private experience. I can’t help it because, if you’ve been doing what I have, for as long as I have, you can’t help but think: Is it a product?

How did lockdown and Covid affect your practice?

Before lockdown, I was working in England; the band was working in London. Every weekend, I would be painting or drawing, but I was really engaged in the band. When the band works, it’s very emotional and quite exhausting. Then, suddenly, approaching lockdown, I found myself back in Los Angeles, and I got Covid early on. I just immersed myself in making art. It was almost like going back to college, but I had to be my own tutor.

I consider myself fortunate that the early part of the pandemic intersected with a time where I just found myself wanting to paint and draw. In the beginning, there was construction going on next door to me, in spite of lockdown. They were throwing away all these boards and wood. I went over and took pieces from next door, using those as surfaces for my work. I wasn’t really at the point yet where I thought I could justify going to buy canvas yet. Most of that first year, I made everything on wood. At the same time, I did play with photoshopping art magazine mastheads, which became the series in the show printed on canvas, “Pandemic Aesthetics.” There’s a lot that’s been said about the value of brands and logos over the years, particularly in fashion, and I’m a magazine freak.

How did you choose the title “Not Broken, Unfinished,” which is also a text painting in the show?

The title comes from Amanda Gorman’s poem at Biden’s inauguration. Her actual words were, “America is not broken. It is unfinished.” I heard that and just thought: I want that, I want that. I did the painting within 24 hours of her giving that speech. It sat on my kitchen wall until now. When we were talking about what the Aspen show should be called, the gallery and I went through a couple of ideas, and then I came back to this painting because I’m 60-something, and a lot of my friends are closing down. They start to feel broken. I read recently that someone said painting is an old man’s trade. I have to remind myself that I don’t need to get hung up on, “Oh I should have started this earlier.” I started painting exactly when I was meant to.

The works in “Not Broken, Unfinished” don’t have a signature style per se, nor does it seem that you’re imposing a narrative on the viewer. Are you in the experimental stages with your medium?

I don’t mind that description. I like a lot of German painters of the ’70s whose work feels all over the map. They’re very anti-corporate. I know what it’s like when you’re just trying to write that hit again, the one that works the way that old one did. I’ve been through that with my band. It’s a noose.

I’ve decided I don’t really mind if my art looks like it’s done by different artists. I don’t feel the need to corral myself to a specific style just yet. I’m having too much fun. Though, I do think that the ten art magazine covers you see in my “Pandemic Aesthetics” series was a way of corralling style, and I’m going to keep working with that. I don’t know whether I’m going to do more art magazines, or whether I’m going to open it up, perhaps more internationally, or even with other types of media.

I think as you get older, you tend to get more self-conscious, whatever creative endeavor you find yourself in. For me, painting has been a blessed—God, I hate that word—antithesis to my music work, which is very collaborative and painstaking. Even the simplest decisions tend to go round the room and everybody has input, and then it has to be weighed. I’m just loving not having to run decisions by anyone. If I want to use red, I’m going to fucking use red.

Growing up with your music on the radio, songs have always had a certain democratic, universal reach. Do paintings lack that kind of accessibility?

Fine arts can be considered sort of elitist. Take Jackson Pollack or John Lennon. If either had any idea of what their work is worth today, I think they would be astounded and disgusted. At the same time, I think everybody that makes art is aware that they want it to be more democratic. It’s really been a runaway train on both music and art. For music, it’s been the value of licensing, of just getting that song, even if it’s 30 seconds in an advertisement, TV show, or movie. Art is slightly different. I’m slow on the ball. Usually, by the time I’ve discovered an artist, their work is going for seven figures, and I’m thinking, “What do you mean?” I have a few things that are important to me that I’ve acquired along the way, but I definitely would not call myself a collector.

Do you listen to music while you paint?

Absolutely, yes—ancient music mostly, very earthly, almost pre-Romantic. I like music that sounds un-electrified, pre-20th century. I want a consistent backdrop that has a sense of historical authenticity. Even though we’re all moving forward, there is something about reaching into the past for me that’s happening with my painting.

It might sound pretentious, but I’ve always been a “meaning of life” kind of guy. We’re moving forward, but we’re always looking back and trying to find something. That’s one of the great things I’ve discovered about painting and drawing. Half the time, I have no fucking idea what I’m going to do. There’s an unconscious process at work, which is exciting, and I couldn’t be happier doing it.

Previous Article
Simon Le Bon On Duran Duran’s Rock & Roll Hall Of Fame Nomination, Rio At 40
Next Article
Duran Duran’s John Taylor casts doubt on whether the band would have existed if GarageBand had been around when they got together
News
Back to all news