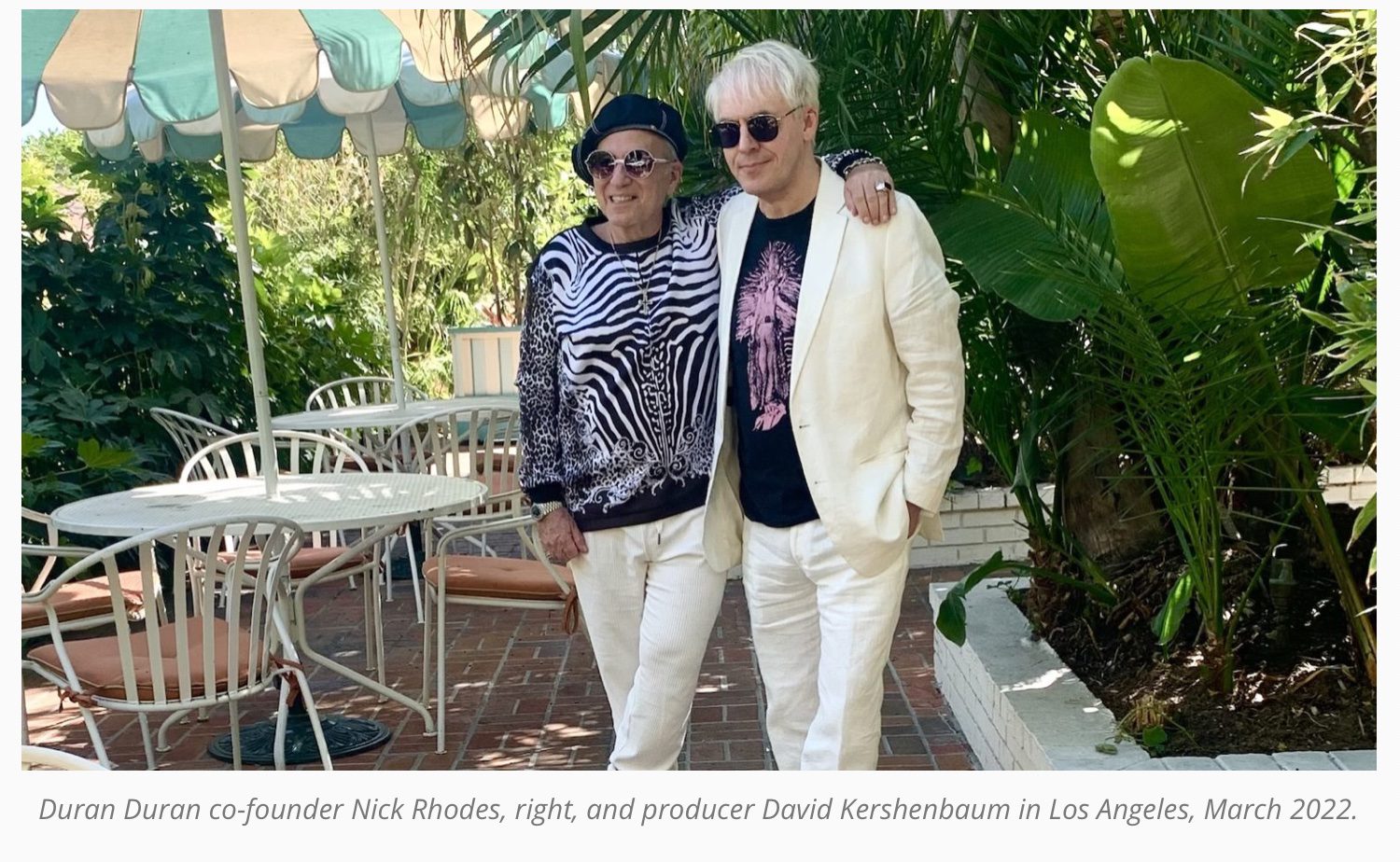 Duran Duran's Nick Rhodes and legendary producer David Kershenbaum share how they hod-rodded "Hungry Like The Wolf"—and half the 'Rio' album—to appeal to American radio.

For Duran Duran, a different pair of ears and hands provided the turning point for its career. The body parts in question belonged to producer David Kershenbaum, whose remix of “Hungry Like the Wolf”— and indeed the entire Side One of the group’s sophomore album, Rio—ignited the British band’s ascent up the American charts in 1983.

The success came after a year of the band’s music not getting radio play in the States, even as the group was scaling new heights of success at home. Much like the band’s 1981 self-titled debut, producer Colin Thurston had helmed Rio; released in May 1982, the album rose to Number 5 on the U.K. charts, but sank without a trace in the U.S. Capitol Records executives couldn’t understand the disconnect between audiences.

Duran Duran founder and keyboardist Nick Rhodes says that he actually did understand, as there was a real disparity in musical tastes at the time, which he explains in a chat from his home in London via Zoom.

“The first time I came to America, in 1981, we’d made our first album, and the single ‘Planet Earth’ was out and later ‘Girls on Film,’ both of which did okay on a college and cult level in America, but neither of them became big hits,” he recalls. “But when I listened to radio in America, I realized this big FM sound was very different than the sound in the U.K. because our main national station, Radio One, was still broadcasting in mono! [Laughs]

“It seems ridiculous to think about it now, but we mixed our first and second album—which had the song ‘Hungry Like the Wolf’—for British radio,” he continues. “They were mixed on an Auratone speaker, which was a small square, a very simple speaker. Of course, we had stereo speakers and the big monitors in the studio, but in the center of the desk, right in the middle, was one little Auratone speaker, and we always used to check our mixes on that because we knew it would be right for Radio One. It wasn’t just us; I think a lot of the artists and engineers and producers used to use this little speaker.

“So when I came to America, I was amazed at the sound of radio. When the option came up to remix some tracks from the Rio album— and specifically ‘Hungry Like the Wolf’—our reaction was, ‘I understand, because your radio is so different from ours.’ Our original version, which still gets played all around the world, sounds great on radio, but it didn’t have that big FM sound.”

Kershenbaum had just returned to Los Angeles after wrapping up Joe Jackson’s Night and Day for A&M in New York, when he received a call from Capitol Records VP of A&R Rupert Perry asking him to come down to the Capitol Records Tower so he could play him something.

As Kershenbaum recalls, he arrived and Perry said, “Look, I’ve got this group; they’re doing very, very well in the U.K., but we’re just not getting any traction here. Can you listen to it and see if you hear some things you can do to it?” Perry put on “Hungry Like the Wolf” and the producer soon spotted aspects that could be enhanced for the American market, like placing some different effects on Simon Le Bon’s vocal, as well as adding guitars and keyboards, and making the track punchier overall. Soon, he and the band found themselves in the Mix Room at Cherokee Studios, Los Angeles, working with in-house engineer George Tutko on the facility’s Neve console.

The producer remembers the band as young kids at the time, and recently, during the making of a documentary, he and Rhodes reminisced fondly about that period (including getting their food at Greenblatt’s Deli, according to Rhodes).

Kershenbaum recalls the keyboardist stating that the band members were in awe watching what he was doing during the remix, relating, “We had no idea what it was; we were just watching it.’” Rhodes acknowledges that he was absolutely fascinated and sat beside Kershenbaum like a student. He remembers guitarist Andy Taylor was there for much of the time as well, while Le Bon was “in and out,” as were the other two members. He also found that the new producer was extremely respectful of the work the band had already put into the project.

“It’s not that he changed it hugely; he just brought everything into focus for radio in America,” Rhodes says, adding that he does not believe they recorded new guitar and keyboard parts on “Hungry Like The Wolf,” but they did add some vocals on the last verse of the title-track “Rio,” and possibly guitar on a different track. “I don’t think we really messed with ‘Hungry’ much; it was mostly David pumping it up.

“The thing that struck me in America immediately was compression,” he continues. “Everybody uses so much more compression, which, as we know, is highly effective, but our versions were a little more airy. Suddenly, when you locked them down, that’s what gave it a lot more punch, the drums particularly. He put more sizzle on the vocal, so the vocal cut through a little more. It was really fascinating, and I’m really happy that we ended up with David, because his intention was to keep the authenticity of what we had done, but just tweak it enough to give it that necessary sparkle.”

“There weren’t a lot of effects back then, but I rode the knobs to get different kinds of effects and things throughout the song to give it more dimension,” Kershenbaum adds. “It all had to be hand-mixed in those days, and I just remember that board at Cherokee was extremely close to some very tall monitors. I don’t remember what the monitors were, but it was loud and it was good! [Laughs] Loud doesn’t necessarily mean good, but this was loud and good.”

He added compression and EQ to the bass and drums to give them more attack, he remembers, chuckling now at what was available back in the day compared to the present.

“There were no samples back then, of course, so it was a matter of re-EQing, re-compressing,” Kershenbaum states. “There were some delay effects and some reverb effects, but we were very limited, so we had to get it all out of compression.

“The first job was to equalize the drums and the bass, and make that really hit hard and work,” he continues. “Then you start to add the elements, because if you listen to the record, there was a lot of sequenced Roland all the way through it, so if it didn’t have the foundation, it wasn’t going to kick the way it should. We had to build the foundation first, then re-EQ the sequenced parts and put them back in. It was really a matter of tearing it down and putting some of the beef back into the parts, building it back up.”

While the bandmembers had no idea whether this new treatment of the song was going to do the trick, they were happy to go along for the ride. “We were always open-minded as musicians and wanted to try out new things,” Rhodes says, adding that they also always had a good time doing it.

“They were fantastic people,” Kershenbaum says. “As a side note, I have never, ever seen so many pretty girls hanging around a band. When you went into that studio, you had to go through about 30 or 40 of them. They had style.”

The remix gambit worked. “They started to get a lot of club play off of ‘Wolf,’ which they hadn’t gotten before,” Kershenbaum says. “They were able to use that club play to really propel that song and finally get it on radio.”

The team ultimately remixed all five songs on Rio’s first side, with three of those reworked tracks—“Hungry Like The Wolf,” “My Own Way” and “Hold Back The Rain”—landing on a four-song EP, Carnival, released in September 1982, before the remixed Rio album and “Wolf” single bowed three months later in December. All the components worked in their favor, but mostly, Rhodes notes, the release of the remix and ensuing exposure on MTV caused the single to “explode,” fueling its rise to Number 3 on the Billboard Hot 100 by the end of March 1983.

Now, nearly 40 years later, Duran Duran will be inducted into the Rock & Roll Hall of Fame on November 5, 2022. “It’s not something we ever really thought about or expected; like most artists, you just carry on doing things and then suddenly you realize, ‘Oh, that was four decades ago and they’re sticking us in a museum,’” Rhodes says with a laugh. “They started giving us Lifetime Achievement awards about 20 years ago. I sensed they were trying to get rid of us then, but it didn’t work!”

Hardly. The original band (sans Andy Taylor) released a new studio album, FUTURE PAST in the fall of 2021, once again hitting the top of the British charts and entering the Top 30 on the Billboard 200 album chart as well—a fitting showing for a band still hungry for success.