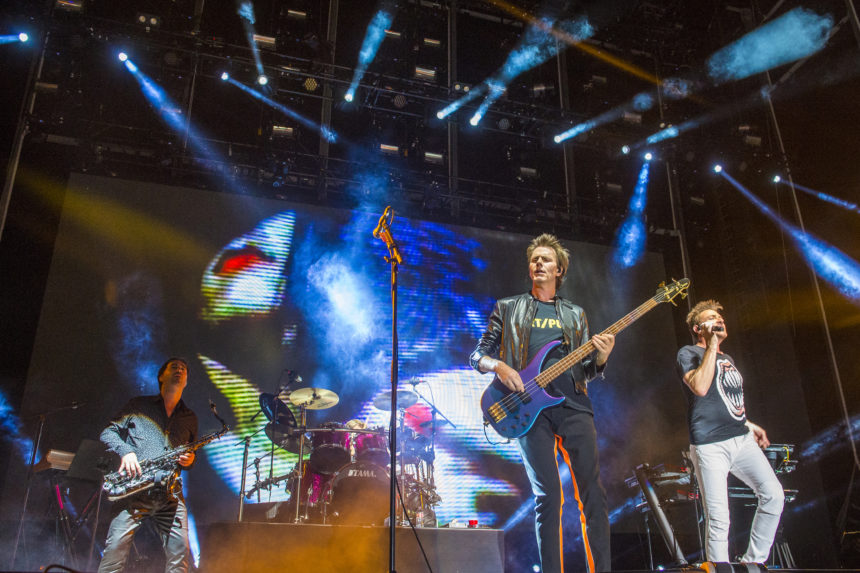 Formed in Birmingham, England in 1978, Duran Duran exploded into popularity alongside the Video Age. Powered by a fervent fanbase and regular rotation on MTV, the band stormed the charts around the world, beginning with their self-titled debut album. Duran Duran hit stores 40 years ago this week and helped to drive what observers called the Second British Invasion. Here’s how five lads combined pop music and high style to create an audio-visual legacy that’s lasted for four decades and counting.

The story begins at Birmingham club Rum Runner. Nick Rhodes and John Taylor, both still in their teens at the time, worked at the club and assembled a group to serve as the house band. The dominant styles at the time were the New Romantic movement (characterized by an embrace of a pop-oriented, synthy sound and fashion inspired in equal measure by ’70s Glam Rock and the Romantic period of the early 1800s) and British punk (typified by the anti-authoritarian bent of The Clash and The Sex Pistols). The reigning punk club was called Barbarella’s; in a bit of nod, Nick and John decided to name their band after a character from the film, Dr. Durand Durand, minus the title and the extra Ds.

The line-up of the band went through a few configurations in the early days. The most substantial contributor who didn’t stick around was guitarist Andy Wickett; he co-wrote “Girls on Film” and the song that would become “Rio” before leaving to join The Xpertz (his later band, World Service, would open for his old mates in the ’90s). The final “original” line-up would coalesce into John Taylor (bass), Nick Rhodes (keyboards), Roger Taylor (no relation, drums), Andy Taylor (also no relation, guitar) and Simon Le Bon (vocals). From the beginning, the band was conscious of showmanship and image; stylist Perry Haines and other designers collaborated with the group on their look.

Eventually, the group signed with EMI in December of 1980 and hit the studio soon after. Their first album, Duran Duran, arrived in June of 1981. One of the earliest impressions that the band made in the U.S. was via its sexually charged video for “Girls on Film,” which underwent serious editing to be shown on MTV. The band began to generate more attention for both their songs and their looks; they also earned many new fans when they toured in support of Blondie. By the time that Rio dropped in the U.K. in March of 1982, they were on their way to being superstars.

However, Rio stiffed in the U.S., except for some dance remixes that were popular in the clubs. The band convinced their American label, Capitol, to allow them to remix and re-release the entire album. The new Rio dropped in late 1982, with the group repositioned as a dance band. And it exploded. The album went to #6 in the States in 1983, and a fusillade of hit singles saw major success, including “Hungry Like the Wolf” (#3), “Save A Prayer” (#16), and “Rio” (#14). As popular as the songs were, the videos were even bigger; driven by constant rotation on MTV, album sales soared. Buoyed by this success, the band re-released their first album in the States with an added single, “Is There Something I Should Know?,” which went to #4.

Members of the band have compared this period to Beatlemania, and they weren’t wrong. Throngs of people filled the streets at signings. Shows sold out. Public appearances produced screaming mobs of fans. Before 1983 was out, the band had recorded and released their third album, Seven and the Ragged Tiger. “Union of the Snake” hit #3 before the year was over, giving the band the distinction of having hit the U.S. Top Twenty five times with songs from three albums in one year. Subsequent single “New Moon on Monday” went to #10, but “The Reflex” was their first song to go all the way to #1 in America. 1984 saw a worldwide tour that was captured on the live Arena album; a new single on the collection, “The Wild Boys,” went to #2. The band would also win two Grammys that year (for long and short-form video) and get featured on the cover of Rolling Stone.

After a rapid ascent and amazing success, there was desire in the ranks to stretch. This resulted in two side projects occurring at what appeared to be the band’s peak. John and Andy leaned into a more rock-oriented direction, forming The Power Station with singer Robert Palmer and Chic drummer Tony Thompson. Simon, Nick, and Roger formed Arcadia, a band with similar sensibilities to the regular group. The Power Station took two singles (“Some Like It Hot” and a cover T-Rex’s of “Get It On (Bang a Gong)” to the Top Ten, while Arcadia landed “Election Day” at #6 and sent “Goodbye Is Forever” into the Top 40.

The five members of Duran Duran reconvened to record “A View to A Kill,” the eponymous theme for the fourteenth James Bond film. The song went #1 in the U.S., the only Bond theme to do so. The band played Live-Aid at the Philadelphia location on July 13, 1985, while “View” sat atop the charts in America. The band didn’t know it at the time, but “View” was the last single that the five of them would record together for almost two decades.

In 1986, Roger Taylor left and went into semi-retirement, citing exhaustion. Andy Taylor signed a solo deal and split after playing on a few songs for the next record; he had a solo hit with “Take It Easy” and co-wrote and produced “Lost in You,” “Forever Young,” and “My Heart Can’t Tell You No” on Rod Stewart’s hugely successful Out of Order. Simon, John, and Nick moved on as Duran Duran, recruiting guitarist Warren Cuccurullo of Missing Persons; Sterling Campbell would eventually become the session, then live, drummer. The group took “Notorious” to #6 in 1986 with a slightly more mature, funk-inflected sound (driven in part by producer Nile Rodgers). However, the band found themselves in a not-uncommon spot in music. Once viewed as teen idols to a degree, they had a hard time shaking that image. They were still recording hit songs (like “I Don’t Want Your Love” and “All She Wants Is”), but it was fairly clear that the peak of the band had likely passed. Campbell would leave for other projects in 1991.

Then, the improbable happened. In a 1993 landscape filled with alternative rock and rising hip-hop acts, Duran Duran released a second self-titled record (aka The Wedding Album). Lead single “Ordinary World” went to #3, and “Come Undone” hit #7. The band again toured the world, and put together a hit collection of covers called Thank You. Critics loathed Thank You, but several of the covered artists, like members of Led Zeppelin, praised the versions of their songs; Lou Reed went so far as to say that the band’s cover of his “Perfect Day” was the best cover ever done of his work.

Duran Duran carried on for the next few years, but without many highs. John left the band for other projects, reducing the group to Simon, Nick, and Cuccurullo. The band departed Capitol/EMI and released a single unsuccessful album, Pop Trash, for Hollywood Records. Simon pitched John on a reunion of the classic group in 2000; after the Pop Trash tour, Cuccurullo exited to rejoin Missing Persons. Throughout 2001 through 2003, the reunited quintet worked on a new album, but couldn’t find a record deal to their liking. Instead, they hit the road.

The reception surprised the band, as fans emerged to cause instant sell-outs, starting in Tokyo. A veritable Duran Duran lovefest happened across a series of awards shows, as the MTV Music Video Awards, Q Magazine, and the Brit Awards all presented the group with variations of lifetime achievement honors. The band signed with Epic Records, and the first single from 2004’s Astronaut, “(Reach Up for The) Sunrise” was another worldwide hit, going #1 Dance and #13 Adult Top 40 in the States and #5 in the U.K. Near the end of 2006, Andy Taylor departed again.

In the ensuing years, the band has never stopped working. Whether doing covers for charity albums or mounting concerts that were filmed and directed by David Lynch, Duran Duran continues to challenge expectations. On May 18, the band announced that their new album, Future Past, will arrive on October 22. The next day, they dropped a new single, “Invisible,” which promptly shot to #3 on the U.K. iTunes chart and #29 in the U.S. Through 15 albums and 40 years of world tours, the boys from Birmingham managed to survive naysayers that insisted they were all fashion and little substance. With tunes that remain alive in the popular consciousness and a recurring groundswell of excitement whenever they announce their return, there IS something you should know about Duran Duran: wild boys always shine.