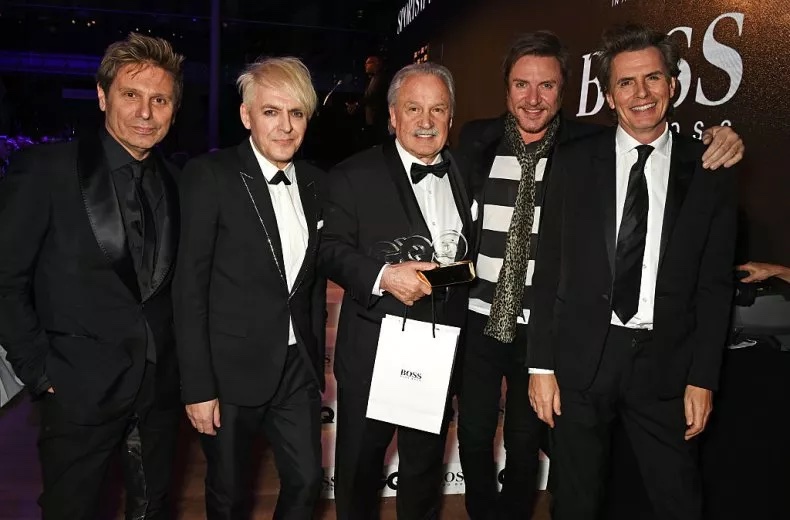 Duran Duran keyboardist Nick Rhodes recalls being in Los Angeles several years ago when his girlfriend mentioned that she had a birthday surprise in store for him: a lunch with the esteemed Italian record producer and songwriter Giorgio Moroder.

"I was absolutely thrilled," Rhodes tells Newsweek. "It's not that often I get excited about meeting someone. I thought: 'Wow, the body of work and the stuff that he's done and the influence on us and a lot of other people.' Anyway, we had the most amazing lunch and just chatted and sort of said, 'Why haven't we worked together? How is that possible?' And the feeling was very much mutual. I knew everybody else in the band would want to work with him."

Along with Kraftwerk and Brian Eno, Moroder is considered one of the founding fathers of electronic music going back to the 1970s. Among his numerous production and songwriting credits include many of Donna Summer's seminal disco hits such as "Love to Love You Baby," "MacArthur Park" and "On the Radio"; Kenny Loggins' "Danger Zone"; Berlin's "Take My Breath Away"; Limahl's "The Never Ending Story"; Irene Cara's "Flashdance... What a Feeling"; and David Bowie's "Cat People (Putting Out Fire)." He also appeared on the track "Giorgio by Moroder" off of Daft Punk's 2013 Grammy-winning album Random Access Memories.

Now Moroder can add Duran Duran to his body of work. He collaborated with the popular British rock band on their new record Future Past, which came out on Friday. It's a perfect match since both artists specialize in electronic-oriented music that is cutting-edge and danceable. "He is terrific that way," Rhodes says, "just a consummate professional and everything you would ever want Giorgio Moroder to be—he is."

Rhodes, one of the founding and current members of Duran Duran along with singer Simon Le Bon, bassist John Taylor and drummer Roger Taylor, said that the band had wanted to work with Moroder going back to when they recorded their 1981 self-titled debut album. In 2015, Duran Duran presented an Inspiration of the Year award to Moroder at GQ's Men of the Year Awards in London.

"About a year after that, we finally managed to make the stars align and got into the studio," says Rhodes."We went in," says Le Bon, "and without really discussing it, we formed a sort of tacit agreement that we just let whatever Giorgio says go. So if he wants to move on, we move on. If he wants to do it this way, we do it this way. At one point, I was singing majors over minors. I like that kind of discord. Giorgio didn't like it. He said, 'Oh, no, no, no, we can't have that.' I said, 'Really?' 'Oh no, I don't think so.' I thought, 'Okay, we'll do it your way.' It really worked for us."

The songs that Moroder co-produced with Duran Duran on Future Past included "Beautiful Lies" and "Tonight United," both of which carry his and the band's distinct imprint. "Tonight United" in particular has a very celebratory and unifying vibe that seems like an antidote to the pandemic.

"I think one thing we've always tried to do is strike a balance between light and darkness," Rhodes says of "Tonight United," "because that's the way life is. You do reflect what surrounds you. But as a group of people, we're generally optimists. At the same time, there's plenty of realism there. And so this is how you end up. If we've done a few things that are perhaps a little more challenging and thought-provoking, it's quite nice to say: 'Let's do something that's just going to lift people's spirits. Let's make people feel good about all the positive things that we're lucky enough to have.'"

Adds John Taylor: "We get to see as musicians something that very few people do: When you walk out on the stage—and if you're as lucky as we are and you've got a number of songs that have gotten under the skin of generations of people—you know what it's like to stand and look out at a crowd of people [of] all types, sizes and colors all having a very human experience. And I think when you pick up on the media, politicians and the kind of divisiveness that is being spread constantly—that is what "Tonight United" is about."

The members also reminisced about some of their favorite Moroder-related works: among them included "I Feel Love," "Hot Stuff and "Bad Girls" by Donna Summer; the album No. 1 in Heaven by Sparks; "Chase" and "Scarface (Push It to the Limit)" from theMidnight Express and Scarface soundtracks respectively; and Blondie's "Call Me."

"The first show we all played together at the Rum Runner in Birmingham," Rhodes remembers, "we actually opened the show with a cover version of 'I Feel Love.'"

Along with the New York City band Chic, Moroder played a pivotal role in the popularity of disco music during the late 1970s that inspired the members of Duran Duran in their youth.

"I remember going down to Bournemouth with my best friend Dave Miles," says Le Bon. "We went to this nightclub. I remember being on the dance floor and it was the first time I'd really ever been in a proper disco—a big, big room it was. I was in the middle of the dance floor, and 'I Feel Love' came on. It made the hair stand up on my arms. It had this sort of trance-like state it brought on to me."

"I think we were amongst the first kids of our generation who were not prejudiced against disco music," says John Taylor, "but actually embraced disco music and fell in love with it, who found ourselves loving disco [as much as] punk, and as formative musicians at that time actually looked to disco as an influence. Roger, Nick and I started listening to Giorgio, started listening to Chic, and thinking: 'Let's have a rhythm section that works like that.'"

For the band, the overall experience of working with Moroder was indelible and influential.

"Nick and I went to see him in concert," Roger Taylor says. "I think it was his first tour at the age of 79. Just the breadth of work, all the stuff he had done—he was just incredible."

"We were all very focused for those days [in the studio with him]," Rhodes says, "and he works quickly and concisely. I learned so much from watching him production-wise. He's the maestro."