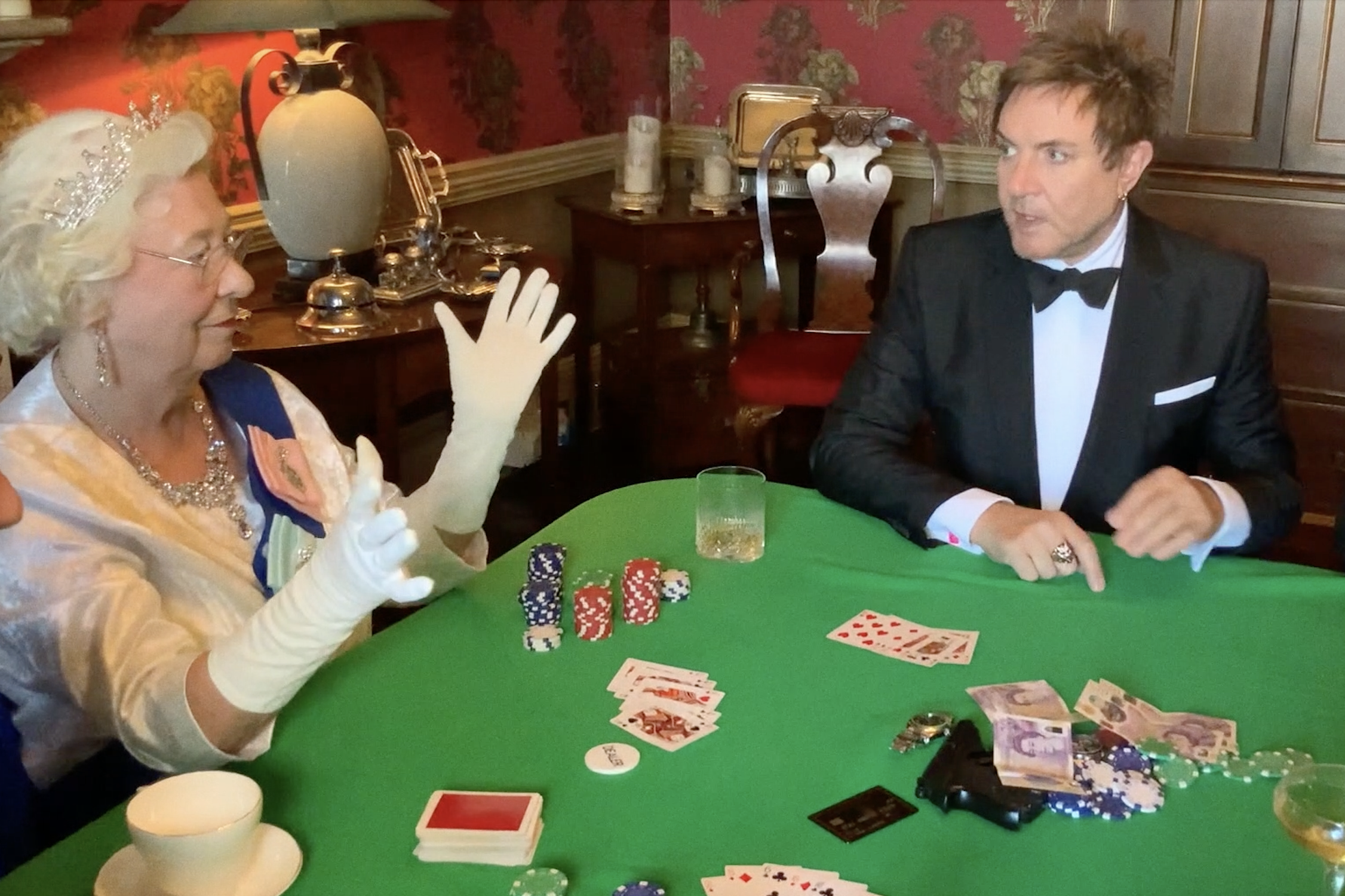 DREAMSTAGE LIVESTREAM EVENT INCLUDES A Q & A WITH THE BAND AND ALISON JACKSON, PLUS THE WORLD PREMIERE OF ‘DOUBLE TAKE’ –A HALF HOUR DOCUMENTARY FROM GERRY FOX AND UNA BURNAND ON OCTOBER 21 AT NOON PT/3PM ET. TICKETS AVAILABLE HERE

NEW ALBUM, ‘FUTURE PAST’ OUT OCTOBER 22 (TAPE MODERN FOR BMG)

The video was shot over three days at the historic Belvoir Castlein the UK, which dates back to the 11th century. Graciously opening its doors to a wealth of celebrity lookalikes, Alison Jackson created lavish scenes of pure decadence, which are wonderfully provocative, and underlined with a healthy sense of humour. Watch what Elton John, The Queen, Daniel Craig, Lady Gaga, Dolly Parton and a host of others get up to in one long weekend with Simon, John, Nick and Roger!

Speaking from London about the video, Jackson said; “I’m thrilled to have been asked by Duran Duran to make their music video - creating an iconic party for their 40th anniversary, bringing celebrities together from past and present.”

Additionally, on October 21 at NOON PT/3PM ET, a special livestream event via Dreamstage will include an exclusive, live Q&A with the band and renowned Billboard editor, Larry Flick, as they reveal untold stories about their time together. They will be joined by Alison Jackson for the global premiere of ‘Double Take’–a half-hour documentary film by award-winning directors Gerry Fox and Una Burnand, that gives viewers an exclusive behind-the-scenes look at the artistry and hard work that went into making the band’s sensational music video for their latest single, ‘ANNIVERSARY’. The performance will replay at 8pm ET/5pm PT, followed by a 72 hour VOD period. The livestream will be the first event to be broadcast from the Now Arcade at the Outernet in Soho, London, prior to the venue’s opening later this year. Tickets are available HERE.

Duran Duran bassist and founding member John Taylor revealed, “‘ANNIVERSARY’ is a special song for us. Obviously we were conscious of our own impending 40th anniversary of making music together, but we wanted the song’s meaning to be inclusive in the broadest possible way. After playing and working together for so long, we very much appreciate what ‘being together’ and ’staying together’ can really mean, it’s not something we would have thought song-worthy 40 years ago but we do today! It was also fun to build a track with hints of previous Duran hits, they’re like Easter eggs, for the fans to find."

The internationally acclaimed, multi-platinum, award-winning pop legends headlined this year’s Austin City Limits Music Festival, and also appeared at Global Citizen LIVE in London, where they performed 'ANNIVERSARY,' which is currently climbing at HOT AC. The recently released album track, ‘TONIGHT UNITED’ was chosen by Global Citizen organizers to be used as part of the theme music throughout the 24-hour event.

Enrolling the help of some of the most exciting names of the last 50 years, with ‘FUTURE PAST’ Duran Duran has delivered yet another incredible genre-spanning piece of work that once again sets them apart from the pack. Working alongside British DJ / producer Erol Alkan and pioneering Italian composer / producer Giorgio Moroder, the band has enlisted the help of some of the most unexpected and inspiring names in pop - including multi-platinum Swedish hit-maker Tove Lo, ‘Queen of Drill’ Ivorian Doll, and Japan’s CHAI on ‘MORE JOY!’. In addition, Blur’s Graham Coxon co-wrote and lends his guitar to several tracks on the record, and David Bowie’s former pianist Mike Garson adds an exquisite sonic layer to album closer ‘FALLING.’The record, which was recorded across studios in London and LA over lockdown, also features long-time collaborator Mark Ronson, who co-wrote and played on ‘WING’, and was mixed by Mark ‘Spike’ Stent.

Earlier this year, Duran Duran captivated American audiences with their spellbinding performance at the Billboard Music Awards, where they debuted their single ‘INVISIBLE’ as well as classics, ‘Notorious’ and ‘Hungry Like The Wolf,’ (WATCH). They also appearedon NBC’s The Today Show (WATCH), The Tonight Show (WATCH), and paid a visit to Bravo’s Watch What Happens Live! With Andy Cohen.

FUTURE PAST will be available on all digital platforms, as well as in a variety of physical formats: standard CD, cassette, a limited edition deluxe hardback book CD featuring three additional tracks, and colored vinyl.