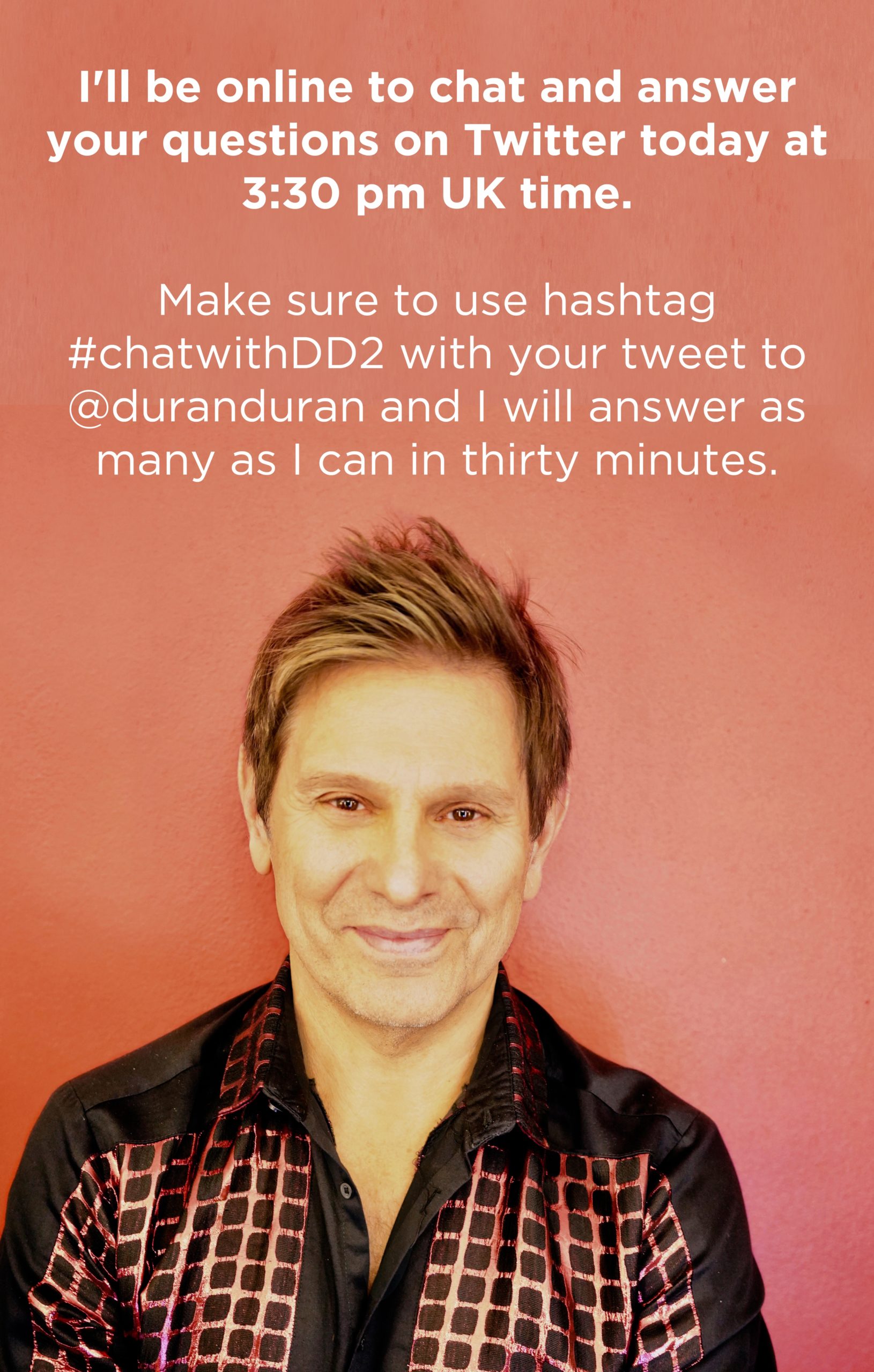 Greetings from Texas Roger! How are you staying "SANE" during this World Crisis?? my Favorite Drummer - Yvonne #chatwithDD2

“Wow Yvonne! It is indeed a world crisis. I am staying sane by not thinking too far ahead. When you 1st get in to this, you wonder how we will get out of it, since every day is the same, which is unusual. I am trying to live in the moment and enjoy simple things in life. RT"

The 1st time I saw you it was in May 2005 in Lisbon, in Coliseu dos Recreios, do you still remember that night? - Maria #chatwithDD2

“Ah… remember being in Lisbon but not that exact show! It’s really hard to remember individual shows but had an amazing time in Lisbon. RT"

Hello Roger, what is your favorite song to play live? - Holly #chatwithDD2

“It kind of changes I think. It depends how I am feeling at any one time. Even though I didn’t play on the original song, it would have to be “Ordinary World” RT”

hi rog!! what’s the fashion choice that you regret the most and why? – Clouded by the Sun #chatwithDD2

“Oh…I am not a great believer in regret. Whatever we were doing was right for the time. I don’t think I transgressed too many fashion boundaries, so the answer would be no, no regret on fashion from me. RT”

What do you think of your FUNKO dolls? - Mike #chatwithDD2

“They’re fantastic! My son Julian loves it the most. He can’t believe a doll has been made of his dad! RT”

Hi Roger, Will we be treated with an official release of the 2003 track 'Beautiful Colours'? - Peter #chatwithDD2

“That was a great song, wasn’t it?? We even played it live a few times. It was very close to being the first song that came out when we did the reunion. At one point in the future, I think it will be released, possibly on an anthology. RT”

Hi Roger! My family got chickens today and I was wondering if you have any Duran-like names for one? Hope you and your family are well as well as all the other band members (and their families of course!) - James #ChatwithDD2

“You got chickens today! I used to have chickens when I lived in the countryside. I loved my chickens til a fox came and ate them…if it’s a male, you should name it HENRY and JEAN for a female. RT”

“Hi Jake. That’s an interesting question. It’s always hard to compare because everyone is so different, like children! I’d love to say…RIO??? Erol Alkan is very much a fan of the drum and bass playing of the early albums and the RIO record. RT”

Hello Roger! My 16 year old daughter Avery is your biggest fan! She would like to know what your favorite Duran Duran album is. Hers is Seven and the Ragged Tiger. She also says PLEASE tour the US soon! – M Farley #chatwithDD2

“Hi Avery! I would have to say my favourite is PAPER GODS right now. I have so many great memories of the tour, which is even more special now since we can’t get out there at the moment. RT” #chatwithDD2

hi roger—curious to get your thoughts on working with giorgio moroder. what kind of influence will that have on the beats/rhythms we should expect to hear? – Sherial #chatwithdd2

“It was incredible working with @giorgiomoroder. He hasn’t lost anything, still a genius, so many ideas. He is so tuned in to to every instrument and every player. He is in to disco, and I relate to that as a player, so he made it easy for me. RT”

Roger, what 3 albums would you recommend to add to my playlist during quarantine? – Lorie #ChatwithDD2

“OK, I’ve been spinning some of my records too. Any Led Zeppelin album is great but I played LZ3 last night. Also Ultravox “Systems of Romance” …and…The Who, “Who Are You?” All pretty old school! RT”

HI Roger, what is your favorite drum beat, in a DD song? – Alda #ChatwithDD2

“Hi Alda. Oh wow. My favourite drum beats would have to be ”Wild Boys” because it is the most distinctive. Also, “Girls on Film.”Ah - and “All You Need is Now” OH and the rhythm on “Paper Gods” RT”

Hello Roger. Could u tell us the first song you knew u really nailed on drums? Like that ah ha moment? And what song was it? Ty so much for doing this! Oh. Also....ur fav DD song u like to play? – Claudine #ChatwithDD2

“I guess it would have to be “Planet Earth.” It was the first time we really put a song together where all the elements welded together. It seemed to have all the things we were looking for in our sound. That was my eureka Duran Duran moment! RT”

Hey from Spokane, WA! Have you ever been star struck and who would you most want to collaborate with? – Chris #ChatwithDD2

“Yes I have Chris. I was invited out to dinner and I didn’t know who would be there…I sat down and was opposite David Bowie at the height of “Let’s Dance.” I was completely at a loss for words, I couldn’t even look at him. RT”

Hi Roger! Simon said we could expect heavy rhythm asylum with just a hint of mayhem on the new album. What description would you add? – Dione #ChatwithDD2

“Great name, Dione! Yea! I would agree with that! It is definitely heavier on organic sounds than the last record. Erol wanted to bring more of a band sound, there’s some great guitar playing and heavy rhythm. RT”

Hello Roger! I’m No.1 fan of U since I was 14yrs old I know U r a big fan of Arsenal My Q is..what do U think about non-audience live game? As pro sports events should they still play wizout audiences? Or shouldn’t they? If U r owner, what would U do? – Miyuki #ChatwithDD2

“I think you mean ASTON VILLA with due respect to Arsenal! To me, having a football match without the audience there would lose a lot of the fun. It’s like a gig with no one in the hall. I don’t think that works. RT”

HI Rog! Which music video did you enjoy making the most? and why? Do you miss the old times? Love from Italy – Veronica #ChatwithDD2

“Hi Veronica. I loved making the Sri Lanka videos in the early 80s. I have amazing memories from that time. RT”

Hello Roger! Have you ever dealt with performance anxiety? What did you do to calm yourself? – Gymmy #chatwithDD2

“I deal with it every night of a show! Every time we perform, I feel it. I have come to realize that is part of being a performer. Simon calls it “going through the curtain of fear.” If you didn’t have it, you wouldn’t be quite as sharp as you would be without it. RT”

What was the worst problem you ever had onstage? – Georgia #chatwithDD2

“Hi Georgia, I think, to this day it would be the Prince’s Trust Charity in London. Charles & Diana were there, it was the biggest show and we were in the middle of “Save of Prayer” and my bass drum peddle flew off in the middle of the song! All the guys were looking at me like “why aren’t you playing the song right??” That was a bad moment! RT”

“My time is up! Be safe, stay where you are, and don’t worry, this will pass. Hugs to everybody in the world! RT”