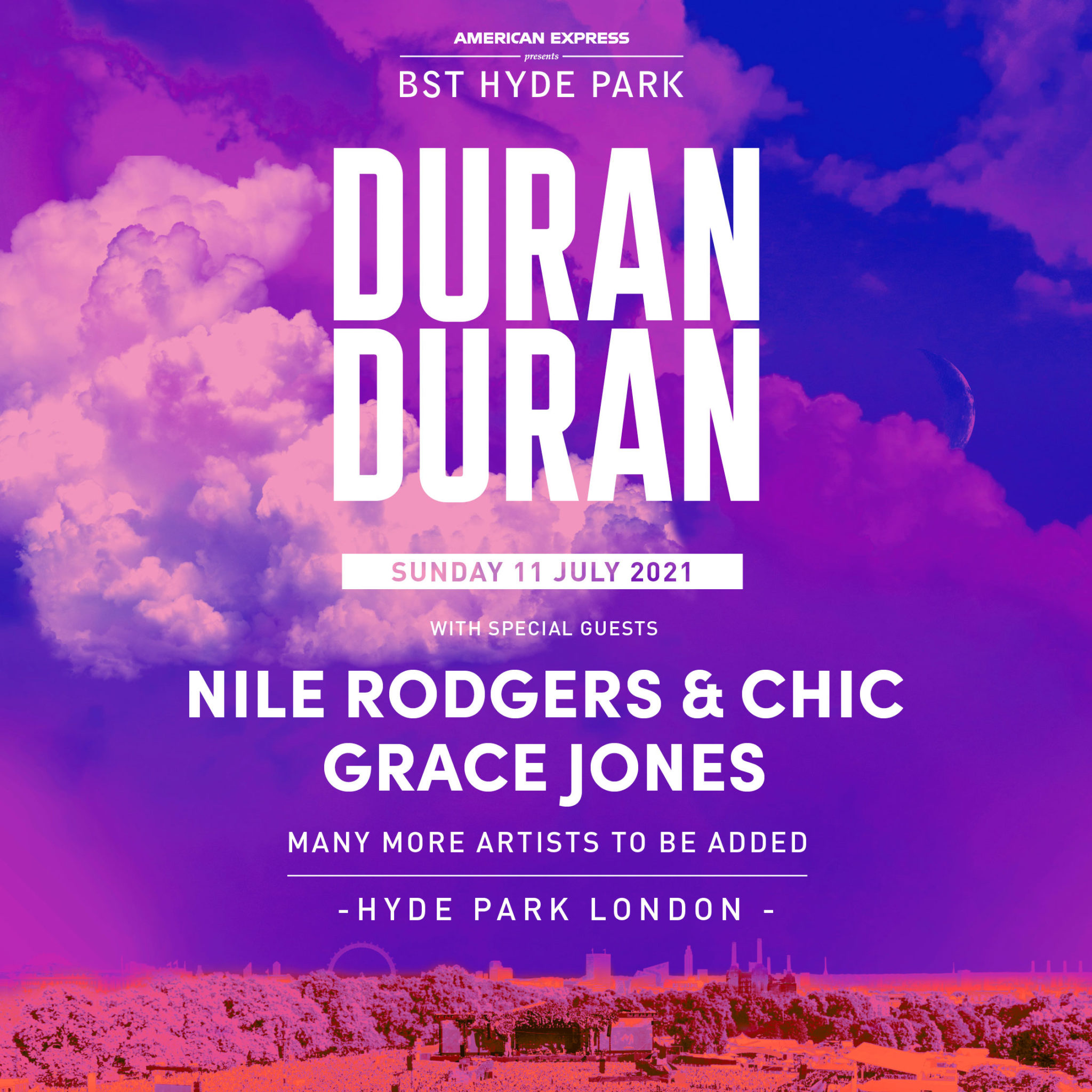 American Express presents BST Hyde Park returns in 2021, for what will be THE celebration of the summer in the heart of London! British icons Duran Duran are back, excited to play their hugely anticipated show on Sunday, 11th July. Joining them are music legends Nile Rodgers & CHIC and Grace Jones - both long-time collaborators and great friends of the band.

British Summer Time 2021 will be a huge and eagerly awaited celebration for the nation. BST Hyde Park has been at the centre of London’s summer since 2013, bringing the world’s biggest artists to the greatest outdoor venue in the world over two weekends, with a host of free activities in between. And we cannot wait to welcome everyone back.

"We are so happy to announce the new date for our return to Hyde Park. This will be our first London show in six years and we are honoured that two of our musical heroes, Nile Rodgers and Grace Jones, will be joining us on the bill. Seeing as we had to postpone the 2020 show, BST Hyde Park 2021 will be extra special to us. After the year that everyone's been through, we're aiming to make next summer into the kind of party we all deserve."

Duran Duran are one of the most successful and ground-breaking bands to come out of the UK in the past four decades, a group that defined a generation and continue to prove themselves timeless, always innovating and reinventing, while remaining ahead of the curve.

And thousands of fans who bought tickets to Duran Duran’s cancelled BST Hyde Park show in 2020 are guaranteed tickets if they rebook. There is also the option to split the cost of your ticket with the BST Hyde Park payment plan.

Comprised of singer Simon Le Bon, keyboardist Nick Rhodes, bassist John Taylor and drummer Roger Taylor, Duran Duran have sold over 100 million records, with 21 UK Top 20 hits and 18 US charting singles. Few bands have celebrated such huge global success and still hold major headlining status. This is their BST Hyde Park debut and their only London show of 2021, so a milestone in itself. Their much-lauded live shows blend the best of new and classics including “Hungry Like the Wolf,” “Pressure Off,” “Rio,” “Girls on Film,” “(Reach Up For The) Sunrise” and “A View to a Kill.”

Their last album, 2015’s Paper Gods, was the band’s highest-charting release in 22 years and was hailed by critics and fans alike as their best body of work in more than two decades. Produced by Mark Ronson and Nile Rodgers, alongside Mr Hudson and Josh Blair, the record features collaborations with Janelle Monáe, John Frusciante, Kiesza and Jonas Bjerre (of Mew).

A global sold-out arena tour over three years followed, including their most recent appearance in The O2 Arena, London. They brought the world’s attention to Hyde Park in 2012 with a special live concert celebrating the start of the London 2012 Olympics. Next summer is their big return to this iconic location for their only show in London, and their first in the city for 6 years!

A longstanding collaborator of Duran Duran will be returning to American Express presents BST Hyde Park on 11th July. The legendary Nile Rodgers will bring CHIC back to Hyde Park for the first time in 6 years; the last show he welcomed audience members onto the Great Oak Stage for a live disco. Even among music legends, Nile Rodgers is truly exceptional. He amplifies his legacy as a multiple Grammy-winning composer, producer and guitarist by constantly traversing new musical terrain.

As the co-founder of CHIC, Nile pioneered a musical genre with hits like "Le Freak," and "Good Times." Additionally, Nile transcends all styles of music across every generation with a body of work that's garnered him his induction into the Rock & Roll Hall of Fame and the Songwriters Hall of Fame. Nile’s work in the CHIC Organization and his productions for artists like David Bowie, Diana Ross, and Madonna have sold over 500 million albums and 75 million singles worldwide.

Duran Duran worked extensively with Nile following his production of their hit single, "The Reflex" in 1983, initially on "The Wild Boys", which was included on their 1984 live album Arena, and subsequently co-writing, producing and performing on tracks on the band’s 2004 album Astronaut and 2015’s Paper Gods. Fingers crossed for an onstage reunion between these two music legends.

Also joining us is Grace Jones - one of the most vital artists to emerge from New York's Studio 54 disco scene of the late 1970s. She is a true visionary, who has been many things during her years in the spotlight: dancehall queen, artistic muse, style icon and actress. Though she got her start on the runways, soon Jones was on the cover of magazines, topping the dance charts with disco and R&B hits like “Pull Up to the Bumper” and “Slave to the Rhythm”, and befriending and influencing major players in the art and fashion worlds.

The Jamaican-American singer, model and actress has crossed paths with Duran Duran time and time again, including her role in the James Bond film A View To A Kill and performing on their spin-off group Arcadia’s So Red the Rose album. Her last record, Hurricane, was released in 2008, followed by Hurricane / Dub in 2011 and she’s teased new music is on the way. Jones’ live shows set a bar of excellence that few are able to surpass; her last BST Hyde Park performance six years ago, during which she climbed on to a bouncer’s shoulders and rode through the crowd, was unforgettable.

Jim King, CEO of European Festivals at AEG Presents, says, “It's wonderful to finally talk about and look forward to next summer knowing that the light we can see at the end of the tunnel will be the sunshine at American Express presents BST Hyde Park. We have always finished each year with a huge party and we need one now more than ever. It's therefore with our enormous thanks to Duran Duran that they have made it possible to bring their incredible hit-packed live show to Hyde Park just when we all needed it most. We celebrate this moment with Duran Duran and the man who helped them make some of their biggest hits, Nile Rodgers and the incredible CHIC. The band also have the legendary Grace Jones joining them for what will be an incredible day of quality music and a chance for us all to dance again."

American Express® Cardmembers can take advantage of the presale from Monday 30th November.

Members of the band’s official fan club can purchase tickets in a presale from 9am GMT on Thursday 3rd December. There is also a priority window 24 hours prior to this for fan club members who purchased tickets for the original 2020 date. Members will be contacted directly with information. They can also visit www.duranduranmusic.com and click ‘Presale’ for details.

The BST Hyde Park payment plan offers you the option to spread the cost of your booking over a number of months, making it easier and affordable to manage your budget.