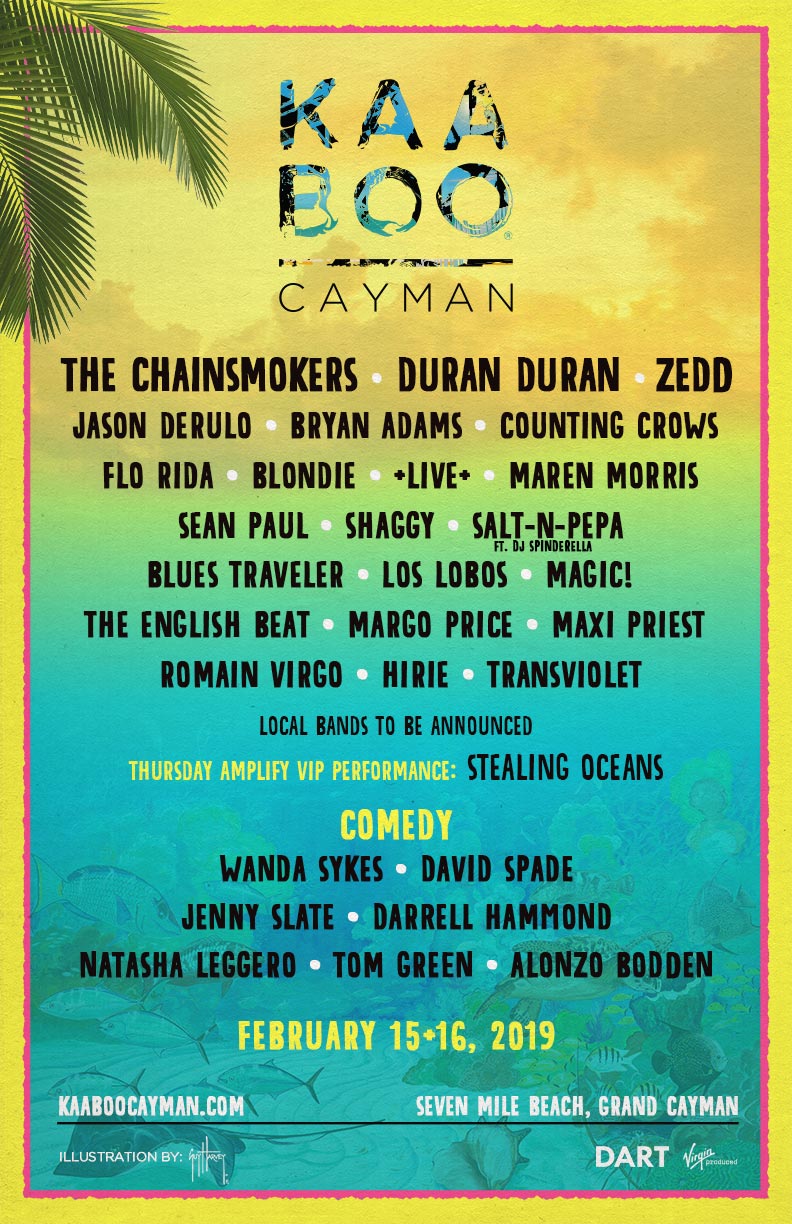 Duran Duran and ​The Chainsmokers will headline the first KAABOO Cayman festival on Grand Cayman Island. The two-day event will take place Feb. 15-16, 2019. Among the other 15 acts on the bill announced today are Zedd, Blondie, Counting Crows, Flo Rida, Jason Derulo, Bryan Adams and Los Lobos.

The Cayman festival will be the first KAABOO outside of its original home in Del Mar, Calif. The fourth annual original KAABOO will take place Sept. 14-16 with headliners Katy Perry, Foo Fighters, Imagine Dragons and Robert Plant (with his Sensational Shape Shifters Band).

The multi-sensory music, comedy, art and culinary festival targets an audience of adults from 18-80 who love music but who aren’t interested in festivals with dust, dirt and porta-potties, according to Jason Felts, chief brand officer of KAABOO and CEO of Virgin Produced, the entertainment arm of Richard Branson’s group of companies and producing partner of KAABOO.

Billboard asked Felts how KAABOO Cayman will be similar to the Del Mar festival. “The lineup for Cayman was curated specifically with the KAABOO fan in mind,” Felts replied. “Similar to our event in California, KAABOO Cayman will also include a combination of bucket list artists and today’s hitmakers. With both a local and tourist focus, KAABOO Cayman also would not have been complete without the islands sounds of Sean Paul, Shaggy and Maxi Priest.

“Like KAABOO Del Mar, KAABOO Cayman will feature local artists competing for a spot on the main stage. The winners, selected by industry professionals, will provide a distinct regional flavor to the lineup. Those attending KAABOO Cayman will enjoy the same signature level of hospitality and customer service as they do at KAABOO Del Mar. All five core ‘senses’ will also be prevalent at KAABOO Cayman: music, art, comedy, culinary, and personal indulgences.”

Many of the acts in the Cayman line-up are familiar to KAABOO audiences, having played the Del Mar venue during the event’s first three years, including the Chainsmokers, Derulo, Flo Rida, Live, Blues Traveler, Los Lobos and Counting Crows, as well as comedians David Spade, Natasha Leggero and Darrell Hammond. Joining those three on the Cayman comedy stage will be Wanda Sykes, Jenny Slate, Tom Green and Alonzo Bodden.

KAABOO Cayman will be staged on a purpose-built site owned by the Dart company, just north of the Kimpton Seafire Hotel on Seven Mile Beach, which has regularly been voted the best beach in the Caribbean by Caribbean Travel and Life Magazine.

​KAABOO will expand to a third location in July 2019 when the first festival in the Dallas-Ft. Worth metroplex takes place. “With KAABOO Texas, we look to overlay our brand values into each annual event by creating memorable and amplified experiences while showcasing a community’s local arts and culture,” said Felts.

Previous Article
This Is My Jam: New wave
Next Article
Duran Duran to Perform at Kaaboo Cayman in 2019!
News
Back to all news