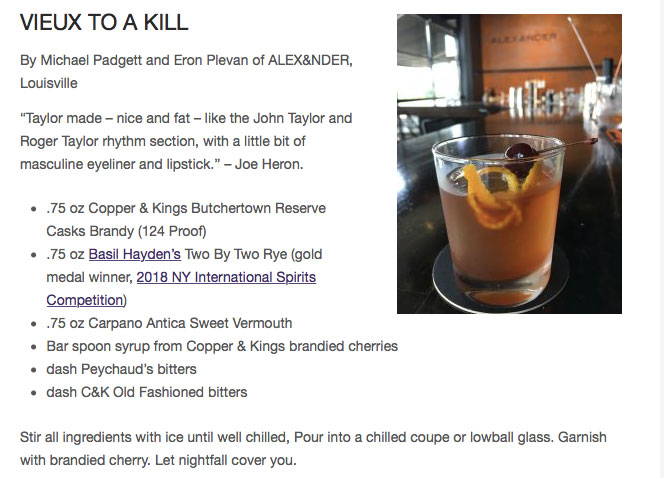 Drinks inspired by the songs and lyrics of Duran Duran - they smell like they sound!
Amanda Schuster | June 20, 2018 |

We sometimes forget that before the internet and YouTube, a nostalgic whim to hear a song or watch a video clip couldn’t be instantly gratified. When I was in my early teens in the 1980s, before my family even considered a cable subscription or owned a VCR, watching something on analog TV or hearing a piece of music on the radio still had a fatalistic thrill, because I never knew when it would come on again, or if I’d even have the reception for it. I’d wait for hours to hear/see it again, transfixed and shutting out the rest of the world when my patience finally paid off. The first time I saw a Duran Duran video, and caught a glimpse of their bassist John Taylor – that cute, wiry guy with the square chin, bleached bangs and grey fedora – and his fetching bandmates singer Simon LeBon, keyboardist Nick Rhodes, guitarist Andy Taylor and drummer Roger Taylor (none of the Taylors are related) – riding elephants in the hot sun and calling one night stands “paradise” – I was enthralled. And broke because I had to own everything – every record, poster, magazine, book. I had to keep seeing and hearing what the “Duran Brothers,” as my friend Liz’s dad referred to them, were up to.

Now it’s easy enough to follow them on instagram, watch any of their videos on demand and access their rare B-side recordings (finding the limited edition vinyl 12” singles with the deep cuts was the 1980s equivalent of scoring a bottle of Pappy Van Winkle in a mom and pop liquor store at regular markup). I was even able to meet John Taylor at his book signing years ago, and waited in line with a cross section of fans – gay, straight, male, female, black, white, tan, brown, green, blue, pink, trans, punk, new wave, old wave, buttoned up, dressed up, dressed down – who all wanted their moment with him in an otherwise ordinary world of a midtown Barnes & Noble.

A few of us in that crowd had something else in common – we share a birthday with JT. And it’s today. So as a little gift to myself, and for John Taylor (fully aware he no longer imbibes), and for all you Durannies out there ahead of their 40th anniversary as a band (minus one of the Taylors who left a few years ago to spend more time with his crunchy guitar riffs), I am making good on a proposal Jason Bylan, my brother-once-removed, made to me last fall: to create a list of Duran Duran-inspired cocktails. Many of the drink names are his.

For this project, I had help from some of my favorite bartenders, who were all cherry ice cream smiles when I assigned them the task of creating cocktails based on specific songs and lyrics. And yes, they’ll taste as impressive as how Nick, Simon, John and Roger have aged.

Courtesy of The Alcohol Professor